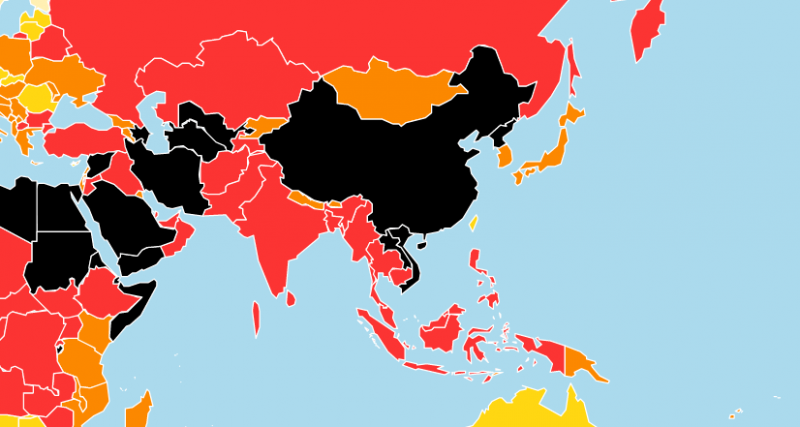 Image from Reporter without Borders 2017 Index.

This post was written by Kris Cheng and originally published on Hong Kong Free Press on April 26, 2017. The version below is published on Global Voices under a partnership agreement.

The 2017 ranking table examines 180 countries and regions. Hong Kong came in at 73, with China ranked at 176. Taiwan, however, rose six places to be 45 – the highest ranking among all Asian countries.

The group questioned whether Hong Kong was facing the “beginning of the end of ‘one country, two systems’,” a principle China designed to guarantee autonomy for the city.

Benjamin Ismaïl, head of the Asia-Pacific desk at the NGO, said there was no shortage of examples demonstrating the erosion of press freedom in 2016. He told Hong Kong Free Press:

Many free speech and human rights groups have condemned the broadcasting by several outlets of the forced confessions of Hong Kong booksellers arrested in China.

He said observers have also pointed out changes in the editorial line of some outlets like the English-language South China Morning Post, which was acquired by Chinese internet giant Alibaba. He added:

Several Hong Kong citizens contacted us to inform us of censorship of their comments on the media’s website and the absence of [a] clear explanation.

He also noted that the government had limited the access of digital media outlets to government press conferences and events:

The fact that digital media, such as Hong Kong Free Press, are considered ‘2nd class media’ and face discrimination in terms of accreditation also shows the difficulties for independent journalists to work freely. 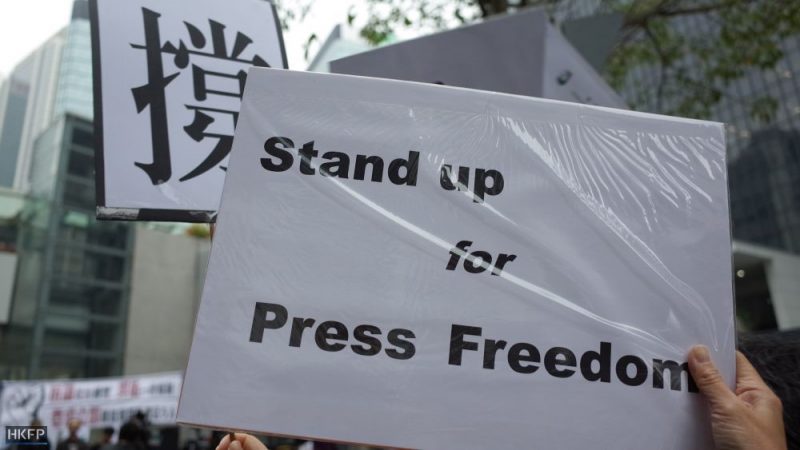 The Reporters Without Borders ranking is compiled partly by using a questionnaire, which is targeted at media professionals, lawyers and sociologists. The questionnaire focuses on indicators such as pluralism, media independence, the overall environment and self-censorship, legislative frameworks, transparency and infrastructure.

The Paris-based group highlighted incidents wherein outspoken journalists in Hong Kong, such as those working for the tabloid Apple Daily, were exposed to violence by who they describe as “the Chinese Communist Party’s henchmen.”

Self-censorship is also rampant, and the index is also a reflection of the perception of press freedom by local journalists […] A majority have expressed an increasing pressure which results in deliberate self-censorship.

Reporters Without Borders earlier in April decided to open its first Asia office in Taiwan, after rejecting Hong Kong over concerns that China poses the “biggest threat” to press freedom.

In Hong Kong, we might be under surveillance, we might have pressure on the staff. […] Nobody is 100 per cent safe… But for our central office that is covering seven countries… it wouldn’t be a safe choice to have chosen Hong Kong.

We think we can bring more support by not [being] directly exposed.

Alviani also said Taiwan’s high ranking may not be because of improvements in the region recently, but rather a global decline in press freedom that may have indirectly kept Taiwan relatively free.

He also pointed out:

Taiwan also has problems of government officials trying to interfere with the work of the state-owned media […] Taiwan also has the problem of mainland China interfering more and more into the editorial line of some of the private [corporate] media.

He nevertheless described Taiwan’s recent improvements as being “beautiful.”