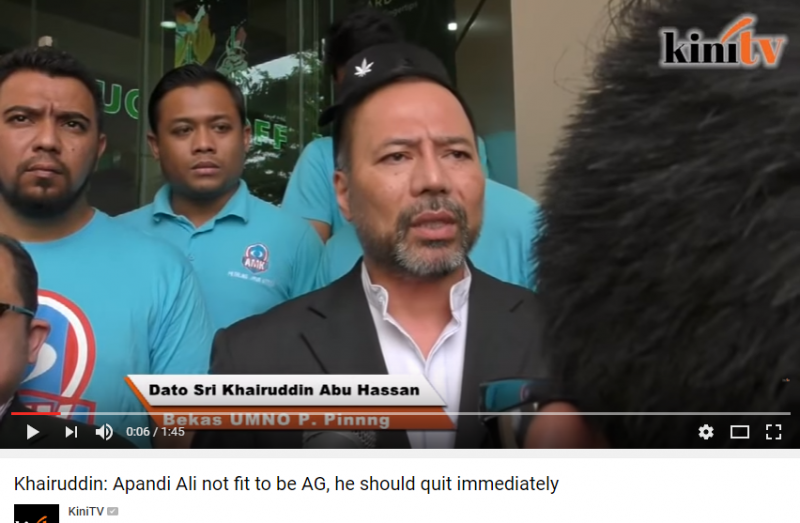 Screenshot of the YouTube video posted on the KiniTV channel about the press conference of a Malaysian politician criticizing the country's attorney-general.

Head staff at two independent news websites in Malaysia are facing cybercrime charges for posting a video of a politician criticizing the country’s attorney general.

The government accused KiniTV and Malaysiakini editor-in-chief Steven Gan and CEO Premesh Chandran of violating the Communications and Multimedia Act of 1998 (CMA), which criminalizes “the improper use of network facilities by knowingly transmitting contents which are offensive, menacing, obscene, false and indecent with the intent to annoy, abuse or threaten another person”.

The charge is related to a KiniTV video posted on July 27, 2016 of a politician criticizing the office of the attorney-general for its failure to identify the role of the country’s prime minister in a corruption scandal involving 1MDB, a state-owned investment bank. The politician, a former member of the ruling party, called for the resignation of the attorney general. The video was taken during a press briefing.

KiniTV is an Internet TV broadcasting news about Malaysian politics. It is part of Malaysiakini, an independent online news website with a large subscription base that has faced regulatory challenges and technical attacks in the past, often related to its political coverage.

If found guilty, both Steven Gan and Premesh Chandran could face a prison term of one year, and could be subject to fines of 50,000 Malaysian Ringgit (roughly USD $11,500). An additional fine of 1,000 Malaysian Ringgit (USD $230) per day can also be imposed for each day the offence continues following conviction.

The corruption issue has sparked a political crisis in Malaysia since it implicated the prime minister, who is accused of pocketing USD $700 million through the 1MDB.

Reacting to the cybercrime charges filed against Steven Gan and Premesh Chandran, the Centre for Independent Journalism (CIJ) urged the government to stop harassing the media:

CIJ calls for these charges to be dropped and for the government to cease all harassment and intimidation of the media and journalist. Media practitioners including journalists and directors of media companies should not be penalized for reporting content of interest to the public.

The group also called for an amendment to the law, which is often used to threaten reporters:

The law also places the burden of proof on the accused to show they have taken reasonable precautions to prevent the so-called offence.

Human rights group Article 19 warned that the case could have chilling effects and stifle other dissenting voices in Malaysia:

The increasing use of this law to target independent media and any online criticism of the government is seriously concerning, and also a clear violation of international human rights law on freedom of expression.

The use of this provision in conjunction with Section 244(1) to target an independent online news portal is a worrying development, and will likely have a chilling effect on media and other independent voices in Malaysia.

In a column on Malaysiakini, writer P Gunasegaram bemoaned the fact that authorities are aggressively attacking independent news websites critical of the government:

It is strange that nobody gets prosecuted for producing fake news or for slanting news but there is prosecution of those who merely produced the unvarnished, plain and bare news.

When government officials, mainstream media editors and ruling party politicians talk about fake news on the Internet, the intention appears to smear all operating there with one broad brush for their own propaganda purposes, ignoring the real contributions that news portals and blogs have made to uncovering truths which would never have appeared in the government-controlled mainstream media.

The court hearing of Steven Gan and Premesh Chandran is scheduled for June 15. Both have pledged to file a constitutional challenge in response, since they believe the law is a violation of the country’s commitment to uphold media freedom.