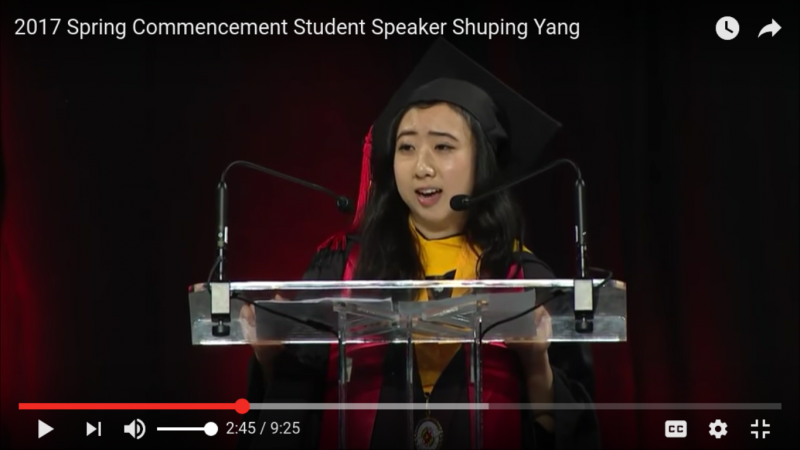 Just hours after she delivered an impassioned graduation speech reflecting on the value of free speech and civic engagement and concluding with the words above, University of Maryland student Yang Shuping triggered online uproar in China.

Netizens have called her a traitor and a “running dog of the West”. Party and state-affiliated media outlets and even foreign ministry officials are using Yang's speech to prove a recycled conspiracy about overseas Chinese students being contaminated by Western ideology.

The video of her 21 May speech, in which she spoke about fresh air and used this as a metaphor to exalt the free speech environment at the US university, was initially circulated by the WeChat public account of “North America Chinese Student Post”（@北美留學生日報 or @collegedaily). The post marks the speech with strong opinion, calling it “humiliating” for China.

With about 1 million subscribers, @collegedaily is notorious for spreading fake news about western countries,  which often reproduce gender and racial stereotypes as well as nationalistic sentiments. This, along with circulating a distorted translation of Yang's speech, is exactly what Yang has experienced since.

While the Chinese web censor has vowed to crackdown on rumors, media outlets that spread nationalistic sentiments are usually immune to censorship and can even help media outlets gain new followers. Yang's story seems to have done just that.

As the story about Yang “humiliating” China went viral online, her personal information — accounts on Instagram, Weibo, WeChat email, mobile phone number, family background, parents’ occupation and more, were identified and circulated on social media. On 22 May, Yang was forced to delete all the posts from her Weibo and issued an apology:

The speech was only to share my own experience abroad and did not have any intention of denying or belittling my country and hometown. I deeply apologise and sincerely hope everyone can understand, have learned my lesson for the future…

Her apology has not stopped the uproar. The next day, party-affiliated media outlets added fuel to the nationalist fire. China Youth Net, which is affiliated with the Communist Youth League, accused Yang of “betraying the country for personal honor.” People Daily’s affiliated commentator Xiake Island even associated overseas Chinese students espousing western values with spies.

Some people, due to their own political belief, are resentful to the current social [political system] and they feel “the air is sweet” [a direct quote from Yang’s speech] outside the country. Hence, they want to subvert the state through spying activities.

Another comment from Cawang, a patriotic website promoting nationalistic scholars, further extended the “spy conspiracy” to the University of Maryland and its graduates in China:

1. Yang Shuping also demonizes China in her theatrical activities;
2. Yang’s University of Maryland has the closest connection with US intelligence among all universities, the connection has surpassed Military Academy at West Point;
3. University of Maryland is connected to James Roderick Lilley [former US ambassador in China] who was one of the dark forces behind XX incident [1989 Tiananmen pro-democracy movement]. He organized training projects specifically for Chinese.
4. University of Maryland’s training has exported Qui He [a former Chinese politician who was sentenced to 14.5 years imprisonment in 2016 for corruption], Zhang Qianfan [a law professor at Peking University] and many westernized officials and scholars who wanted to change the political system.

While the first and second points in the Cawang post cannot be proven, the third and fourth merit some additional context. US diplomat and former CIA operative James Lilley was the founding director of the Institute for Global Chinese Affairs at the University of Maryland. He was openly critical of Chinese authorities’ suppression of the Tiananmen Square protests, but also opposed the US government altering relations with China in response to the crackdown. In regards to the fourth item, Qui He studied at the University of Maryland for several months. Zhang Qianfan attended University of Maryland from 1992-1994 for “advanced study in Laws.” Zhang has been very vocal in advocating constitutional reform.

On 25 of May, Foreign Ministry Spokesperson Lu Kang made a rare non-diplomatic comment on the incident:

Chinese citizens should be responsible for the remarks they make. This applies to not only China-related issues, but also other issues…When a citizen makes remarks on his or her own country, regardless of the occasion and the way, others can easily sense the feelings he or she shows towards the motherland.

I also notice that the above-mentioned student has made a statement or, so to speak, an apology later on. She said that she loved her motherland and wished to come back to make contribution to it after graduation. If this is true, I should say that, many young Chinese students are now studying overseas, whose views and perceptions of some things may change and evolve after going abroad. But as long as they love their country deep down in their heart and stand ready to contribute to it, I believe the Chinese government will encourage, support and welcome them.

In 2015, there were about 523,700 overseas Chinese students studying abroad and approximately 80% of the students would return home. The message of foreign ministry can be interpreted as a sign that the Chinese government will only welcome the patriotic students back home. In this case, it appears that “patriotism” is best expressed by making only positive comments about China.

How should Yang’s speech be rewritten to show that she loves the country? Many netizens are asking in Chinese Question and Answer platform Zhihu. Qin Xiaoming, a popular Zhihu rewrote the speech with sarcasm. Below is a partial translation:

I am truly honored and grateful to speak at the commencement for the University of Maryland, Class of 2017.
Please allow me to thank my great mother country, party and government. I am deeply grateful to the State and to the people.
Without the support of the party, the state and the people, I could never step out of the country and come to America for study…
People keep asking me why did you travel thousands of miles to study in University of Maryland?

My answer only has four words: clearing up misunderstanding.
Western countries, including the US have many and deep misunderstandings about my motherland. My only objective to study in the US is to help you see a real China, a China different from your impression.

For example, the air in China. Many Americans believe that China’s air quality is very poor and all the cities are surrounded by toxic smog that cannot be inhaled.
Such depiction has seriously distort the fact.

In reality, only Beijing, Shijiazhuang, Jinan, Zhengzhou, Chengdu, Hanzhou, Shanghai, Wuhan, Xian and etc. are slightly suffered from smog during winter time when people have to wear masks that specially designed for smog, we have cities like Kunming and Lhasa with good quality all over the year […]
Who say China does not have freedom of speech. If I follow your misunderstanding in this speech and criticize China for lacking freedom, within three hours across the Pacific ocean, online speech can insult me without any restraint, even my family and friends will be insulted.
Moreover, some media which look professional would join in to criticize me. Such kind of speech freedom can rarely be seen worldwide. […]

In history, many had traveled abroad to receive western education. Apart they return, they claimed that western political system was more advance.
For example, those who studied abroad during late Qing period and those who advocated for Mr. Democracy and Mr. Science in contemporary time.
They not only criticized but had overthrown their state with violent revolution.
Do you consider Lu Xun, Hu Shi, Chen Duxiu and Li Dazhao patriots?
I don’t think so…