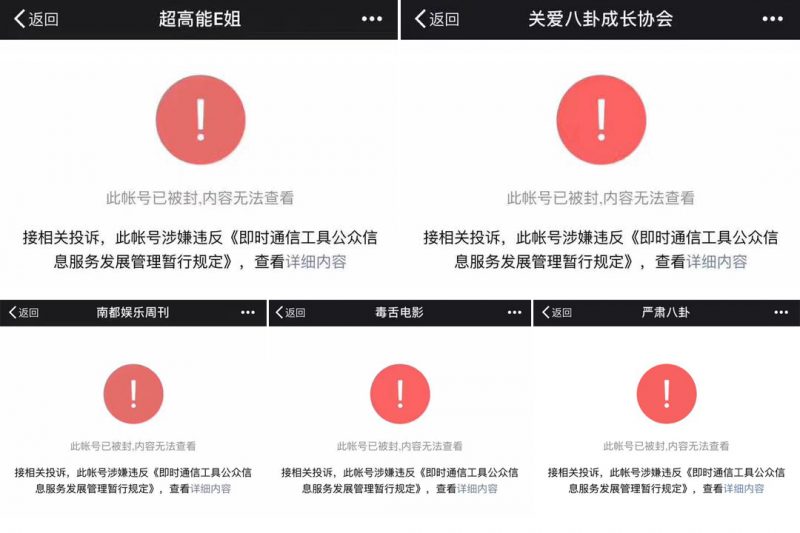 A large number of entertainment news outlets on WeChat have been shut down. This notice from WeChat reads: This public account has been banned and content inaccessible. We've received complains that that this account has violated “Interim Provisions on the Administration of the Development of Public Information Services Provided through Instant Messaging Tools.” Image via the Initium, licensed for non-commercial use.

The crackdown has been justified under China's newly implemented Cybersecurity Law, which emphasizes ideological control as a core component of maintaining state security.

More than 60 outlets have been shuttered in less than a week, some of which are commercial news outlets funded by private capital investments, while others are entertainment sections of newspapers such as “Entertainment weekly of Southern Metropolis” (@南都娛樂週刊). Other examples include “Care about gossip association” (@关爱八卦成长协会), which has a market value of up to RMB 100 million (approximately US $15 million) and “Movie Lambaste” (@毒舌电影) with a market value of up to RMB 300 millions (approximately US $40 million dollars).

According to a report from state-run Xinhua news, Beijing's Office of Cyberspace Affairs cited China's Cybersecurity Law, enacted on June 1 2017, as impetus for the crackdown. They implored content platform operators to enforce the law:

Individuals and organizations cannot infringe on other people’s reputation, privacy, intellectual properties and other rights using the Internet. Operators should reinforce the management of their users and the distribution of user content. Once [the operators] find that information has violated related laws and administrative rules, they have to stop transmitting the information, eliminate the sources and prevent the information from spreading. The record should be preserved and reported back to the authorities.

China’s Cybersecurity Law went into effect despite deep concerns about the powers that it gives to law enforcement to obtain sensitive information, including encryption keys, from network operators. The law has also triggered major concerns among foreign companies, over its requirement that local data be stored within China.

Thus far, local Chinese media outlets are the first groups to be affected by the law. Beginning on June 1, public social media accounts could not write or republish news reports without a permit, as stipulated by the Provisions for the Administration of Internet News Information Service.

This is not the first time entertainment news and information have been censored. The privately funded sector, though not politically sensitive and relatively free from the control of the authorities, has been a target of political campaigns.

Importantly, the Cybersecurity Law identifies ideology control as a significant part of state security. The Cyberspace Affair Office stressed that operators should manage the Internet by spreading “core values of socialism”:

When you said you had to crackdown on copyright right infringement, subtitling groups were disbanded and movie download platforms were shuttered. We could no longer learn English and Japanese through American and Japanese drama.

When you said Japanese animation were bad for kids, that they were violent and vulgar, a large number of subtitling groups were disbanded.

When you said this or that actor was not patriotic, that they supported Hong Kong / Taiwan / Tibet / Xinjiang independence, you called for a boycott. All their music and movies were banned.

When you said South Korea was aiming missiles [THAAD] at us, you asked us to boycott. All the Korean uncles [actors] had to eat shit in front of our fatherland.

Now you say all these entertainment news outlets are vulgar. OK what else should we watch? Drama on Sino-Japanese War?

In the past, many believed that the driving force of censorship was mainly political and that people could enjoy “online freedom” as long as they refrained from commenting on current affairs. But the crackdown on entertainment news indicates that ideological struggle is not only directed against foreign enemies, but also at thoughts and activities seen to go against “socialist core values”.

Some netizens have been puzzled by the decision. The two netizens’ comments below are from letscorp.net, a blog that records hot topics on Chinese social media:

I always thought that entertainment news was intended to divert attentions from important incidents, to intoxicate people’s minds so that those who could potentially bring trouble to society could kill time. How can that be banned.

Some see the ban as the real-life drama of George Orwell’s 1984: