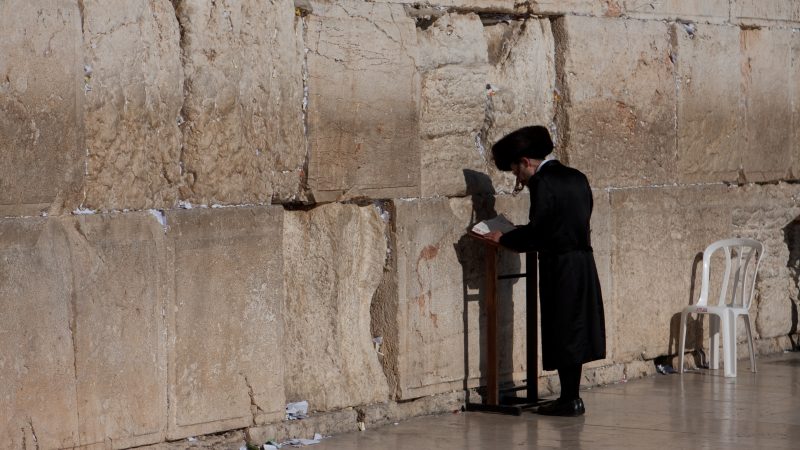 An orthodox Jewish man prays at the Western Wall. Photo by Brian Jeffery Beggerly via Flickr (CC BY 2.0)

On 8 June, the Palestinian Authority (PA) arrested a young Palestinian activist, Nassar Jaradat, over a Facebook post criticizing a Palestinian official. The arrest appears to be part of a broader crackdown on free speech in the Israeli-occupied West Bank.

Jaradat, a 23-year-old activist and student of agricultural engineering at Al Quds University, published on his Facebook page a post critical of Palestinian official Jibril Al Rajoub, who caused controversy with a recent interview he gave to Israel's Channel 2 “Meet the Press” program.

On the program, Al Rujoub, who is from the West Bank's ruling Fatah party, said that the Western Wall in occupied East Jerusalem should “remain under Israeli sovereignty.” The Western Wall, located at Al Haram Al Shareef or Temple Mount in the Old City of Jerusalem, is a place of prayer and a highly contested holy site, revered by both Muslim and Jewish people. It is administered by a Jordanian Islamic religious trust or Waqf.

Al Rajoub's statement was widely denounced by Palestinians who saw it as an outright concession of Palestinian rights to their land and the holy site. Many condemned the statement, saying that it did not actually represent Palestinians or their aspirations for liberation and freedom from Israeli occupation. 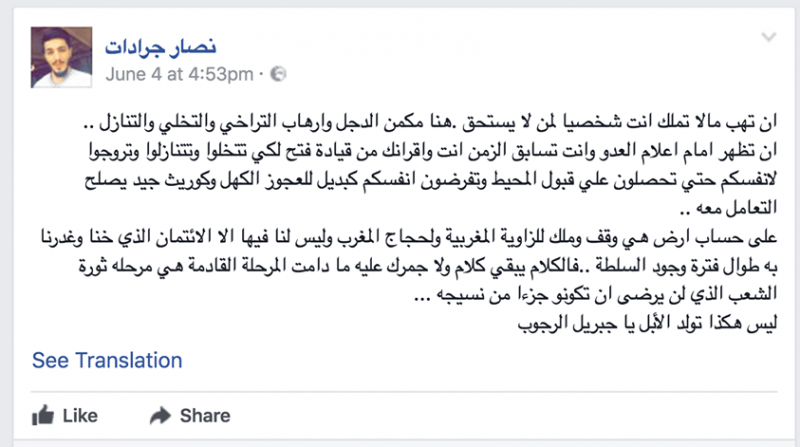 To give what you don’t personally own to those who do not deserve it. This is the essence of deception and the terror of concession…to appear in the enemy media, by competing with time, you and your ilk from the Fatah leadership, you make concessions and promote yourself in order to be accepted by the surroundings and to impose yourself as an alternative to the “old man” [referring to Palestinian President Mahmoud Abbas] and a good inheritor who can be accepted [by the Israelis]..

At the expense of a land that is of Islamic Waqf and belongs to the Moroccan Quarter and the Moroccan pilgrims, and which is protected by nothing but trust, a trust which we have betrayed and deceived during the existence of the [Palestinian] Authority. Words remain words, there are no taxes on words, as long as the next stage is the stage of people’s revolution, and these people will not accept you as part of this movement…Jibril al-Rajoub, this is not how it works.

Right after publishing his post, Palestinian Preventive Security, an internal intelligence apparatus tasked with protecting the PA, arrested Jaradat from his home and detained him for three days. He was subsequently charged before a Palestinian court in Ramallah with insulting and defaming public officials. His detention was renewed for an additional 15 days. 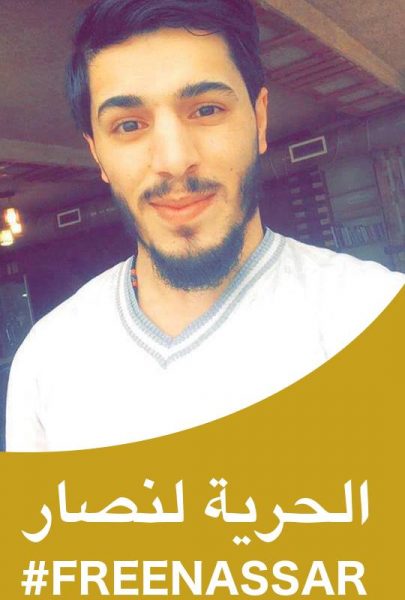 Jaradat could risk anything from three weeks to two years in jail, in accordance with chapter 2 (3) on “defamation, insult and abasement” of the Jordanian Penal Code of 1960 which is still applicable in the West Bank. The PA has often used criminal defamation clauses in the law to crack down on Palestinian activists and journalists who openly criticize Palestinian officials and politicians.

Jaradat's family and friends launched a Facebook page “الحرية لنصار جرادات – Free Nassar Jaradat“, asking supporters to use the hashtags #FreeNassarJaradat and #FreeNassar on social media to campaign for his immediate release.

The Samidoun Palestinian Prisoner Solidarity Network is also campaigning for his release and has asked people to contact the Palestinian embassies and representative offices in their respective countries.

The arrest of Jaradat adds to a longer string of violations of freedom of expression online by the PA, which has detained a number of journalists and activists for expressing their political views on Facebook.

It also underscores the problem of the so-called “revolving door” connecting security coordination between the PA and the Israeli occupation. The revolving door describes a policy whereby Palestinians released from PA prisons are arrested again by Israel shortly after their release or vice versa. In the case of Jaradat, who was previously imprisoned by Israel, his current arrest by the PA puts him under the radar of the Israeli authorities, making him vulnerable to be arrested again by Israel.

Condemning the PA's increasing political repression against its own youth activist, the Union of Palestinian Communities and Organizations in Europe sent an open letter to Members of the European Parliament calling for the immediate release of Nassar and an end to the PA's repressive policies under a banner of security coordination.