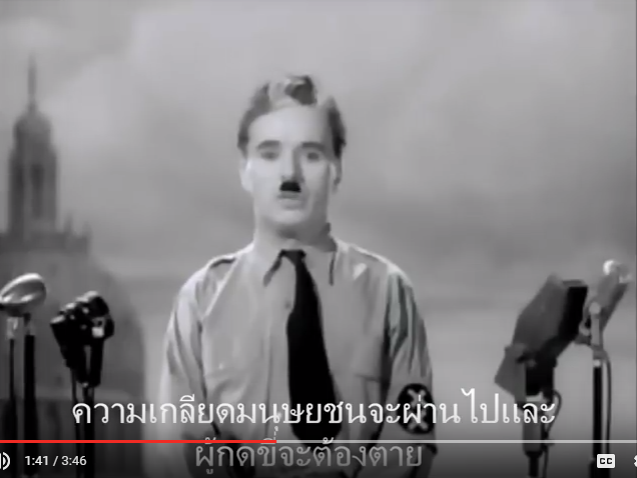 This video clip was banned in Thailand. This part with Thai subtitles features a speech of Charlie Chaplin (dictator): “The hate of men will pass, and dictators die, and the power they took from the people will return to the people. And so long as men die, liberty will never perish.” Screenshot from YouTube

A video clip of Charlie Chaplin’s ‘The Great Dictator’ has been blocked on YouTube at the behest of the military-backed government of Thailand.

‘The Great Dictator’, a Hollywood film by comedian Chaplin, parodied the rise of Nazi leader Adolf Hitler in 1940.

On 11 June 2017, the Thai Academic Network of Civil Rights urged the public to watch a YouTube clip of ‘The Great Dictator’ in which Chaplin exhorts the people to take back power from the dictator.

Thailand’s army grabbed power in 2014 but it vowed to restore civilian rule once political and electoral reforms have been implemented. The constitution passed in 2016 was intended to pave the way for holding elections, but critics argue that it has reinforced military rule within the country's bureaucracy.

Internet users reported on June 24 that the video clip with Thai subtitles was inaccessible on YouTube. The page for the video instead displayed the standard message: “This content is not available on this country domain due to a legal complaint from the government.”

June 24 is the day when Thailand commemorates the 1932 revolution which ended the country’s absolute monarchy.

The group Thai Lawyers for Human Rights said the request to block the video clip was probably made by the Ministry of Digital Economy and Society.

Veteran journalist Pravit Rojanaphruk‏ wrote on Twitter that the junta's order is “hilariously insane and dictatorial.”

Some activists wanted to celebrate the 85th anniversary of the revolution by highlighting the struggle to end the military dictatorship in the country. They accused the junta of suppressing the rights of the people by using the Lese Majeste (law against ‘royal insult’) law to detain and persecute government critics.

On June 27, the video was re-instated, but the story of its blocking remains a hot topic in Thai media.

The Bangkok Post newspaper published an editorial describing the order to block the video clip as the ‘worst decision’ of the government in preventing the people from commemorating the 1932 revolution:

Once again, by its aggressive censorship, the regime has only succeeded in making material more popular.

This regime seized power on a single promise to bring reconciliation. It is not just failing at the task. Actions such as the weekend attacks on sense and sensibility only drive more wedges between factions and groups.

The Post also reported that since YouTube re-instated the video, its views have spiked from a few hundred to several thousand.