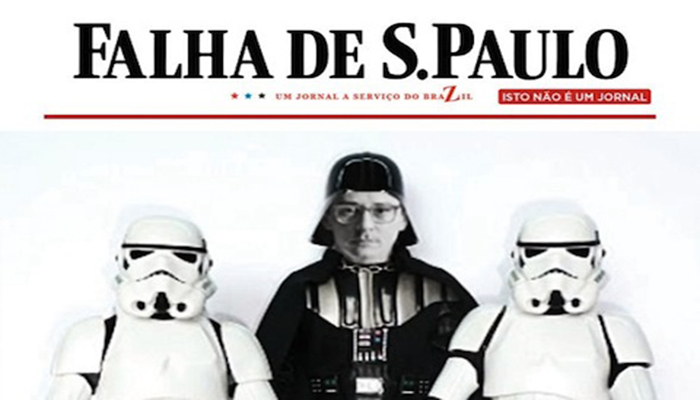 Collage made by the Bocchini brothers with the face of Otávio Frias Filho – owner of newspaper Folha de São Paulo – in Darth Vader's body. Used under CC 2.0

After a court battle that lasted seven years, Brazil's Superior Court of Justice ruled in favor of a satirical Brazilian website taken down in 2010 — a historic decision that put an end to one of the most emblematic cases of censorship on the Brazilian Internet.

The website Falha de São Paulo, created in 2010 by brothers Lino and Mario Bocchini, was a parody site of one of the country's largest newspapers, Folha de S. Paulo. The title is a wordplay with the word “folha” (which means paper in Portuguese) and “falha” (failure).

It published ironic montages of the Brazilian paper and had a “headline generator”, with which visitors could create fictional news with the newspaper's typography and graphic layout.

The intention of the creators was to draw attention to Folha's supposedly biased coverage of Brazil's 2010 elections. The newspaper tends to favor center-right positions and political parties.

After the site had been online for only 17 days, the Frias family, owner of the Folha de São Paulo, obtained a preliminary injunction levying a fine of R$ 1000 (USD 300 as of June 2017) for each day that the website remained live. The suit claimed that the Bocchini brothers had copied the brand and graphic layout of the newspaper and were exploiting them commercially.

The company also filed a lawsuit against registro.br (which manages all domains ending in .br), freezing the domain falhadesaopaulo.com.br so that no one could register it.

On June 21 2017, the Superior Court of Justice reversed previous court decisions on the case, which had upheld the Frias family suit, and ruled in favor of the Bocchini brothers, allowing them to put the website back online.

With four votes against one, the court ruled that patent law allows parody and the right to irreverence and entertainment.

Justice Luís Felipe Salomão, the first to diverge from previous court rulings, invoked Brazilian copyright law, which provides for freedom of parody “as long as they are not true reproductions of the original work.” In his vote he also stated:

The object exploited by Falha, acknowledged even by the appelate, is the critique of ideological and political views of Folha, without any intention of self-promotion of competing stories. This is based on the simple fact that the website would not feature the same stories sought by the consumers of Folha.

The Bocchini brothers have not yet decided whether to put the site back online again.

In an interview with Caros Amigos magazine, Lino Bocchini said:

It would be very bad if their theory prevailed that it was a simple business question — this made no sense since there was no commercial banner, no ads, nothing was being sold.

The NGO Article 19, which fights for freedom of expression worldwide, welcomed the STJ's decision:

For the entity, the process was moved on the basis of the newspaper's intolerance of the criticism directed against it.

In this sense, Wednesday's ruling by the STJ represents a victory for the right to freedom of expression and should be considered as jurisprudence in other similar cases that may occur in the country.