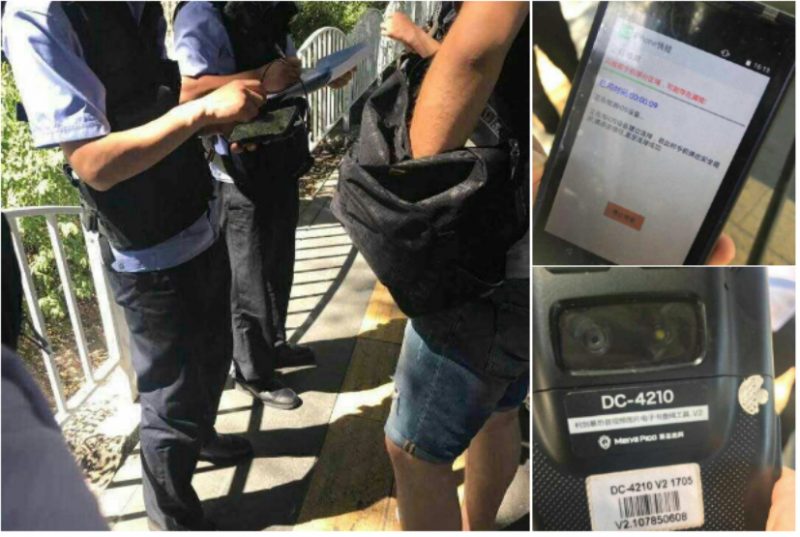 Residents of Xinjiang, an ethnic minority region of western China, are being forced to install spyware on their mobile phones.

On July 10, mobile phone users in the Tianshan District of Urumqi City received a mobile phone notification from the district government instructing them to install a surveillance application called Jingwang (or “Web Cleansing”). The message said the app was intended to “prevent [them] from accessing terrorist information.”

But authorities may be using the app for more than just counter-terrorism. According to an exclusive report from Radio Free Asia, 10 Kazakh women from Ili Kazakh Autonomous Prefecture were arrested for messages sent to a private WeChat group chat soon after they installed the app.

The notification from police said the application would locate and track the sources and distribution paths of terrorists, along with “illegal religious” activity and “harmful information,” including videos, images, ebooks and documents.

Jingwang is a protection service with an adult and child categorization system introduced by Jiangsu Telecom. The main function is to block pornographic websites, online scams, trojan horses, and phishing sites; to alert users of how much time they spend online; and to enable remote control of one's home network. The tool is intended to help kids develop a healthy lifestyle by building a safe web filter for the minors.

Of course, any tool with these capabilities could be used in multiple ways. For example, the app's “remote control” feature could enable state actors or even hackers to manipulate or steal from a person's home network.

The move is consistent with other measures of control over digital activities in the region. While stories of digital censorship in China often focus on the experiences of users in major cities in the east and south, the reality is often more bleak for those living in remote, embattled ethnic minority regions such as Xinjiang and Tibet. Seeking to contain unrest and discontent in conflict areas, authorities often impose extreme censorship and surveillance measures and routine Internet shutdowns.

A Twitter-based media outlet, “Images from mainland China” (即时中国大陆映像), which covers censored news in China, posted photos taken from a checkpoint where police officers randomly checked residents to see if they have installed the surveillance app:

Authorities from Xinjiang are checking to make sure that people are using the official Jingwang application. A mobile notification demanded people install the app within 10 days. If they are caught at a checkpoint and their devices do not have the software, they could be detained for 10 days. This is a setback on the development of technology. They forced people to use devices designed for the elderly. It is a form of confinement by through surveillance technology. We are back to Mao's China.

“Images from mainland China” (即时中国大陆映像) also posted a product description of Jingwang which explained that the tool can negate the password requirement of a Windows operating system and access the computer hard disk with no restrictions.

Once installed with Jingwang, computers and mobiles in Xinjiang, would become electronic handcuffs.

The Jingwang requirement may be a response to the city party committee’s instruction to crack down on the distribution of illegal content. All government branches and government and party affiliated institutions, including universities and research organizations, are obligated to follow instructions from the Cybersecurity Office on managing their computer and communication networks.

In Xinjiang, authorities in a district of the regional capital Urumqi issued a notice on June 27 instructing all residents and business owners to submit their “personal ID cards, cell phones, external drives, portable hard drives, notebook computers, and media storage cards” to the local police post for “registration and scanning” by August 1.

The goal is ostensibly to identify and purge any “terrorist videos,” but the action violates the privacy rights of Urumqi's three million residents and exposes them to punishment for a host of other possible offenses, including those related to peaceful religious or political expression.