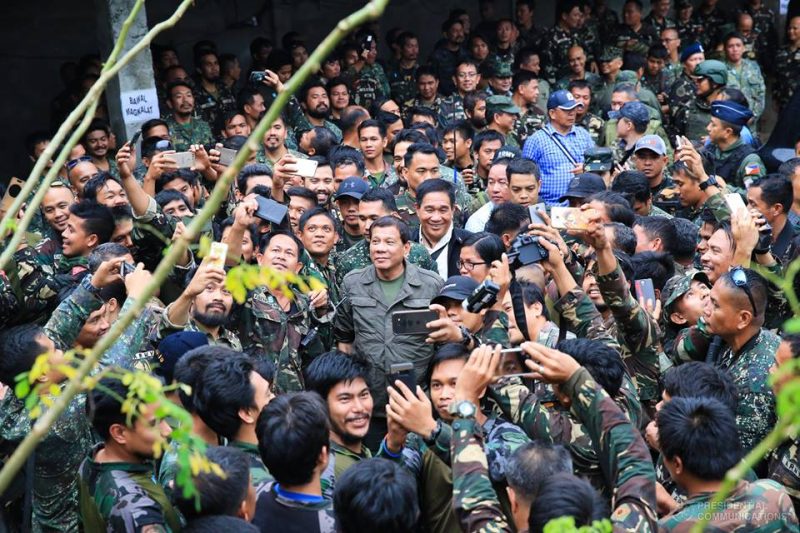 Soldiers taking selfie photos with Philippine President Rodrigo Duterte in an army camp in Mindanao. Photo from the Facebook page of Presidential Communications (Government of the Philippines).

A University of Oxford study has caused uproar in the Philippines for examining the administration of Rodrigo Duterte's efforts to manipulate social media through trolling and fake accounts. The findings confirmed what government critics have long suspected while stirring harsh denials by the president's supporters.

Duterte himself, however, later said in a press conference that he had in fact hired online commenters during the election.

Entitled “Troops, Trolls and Troublemakers: A Global Inventory of Organized Social Media Manipulation”, the July 2017 study by Samantha Bradshaw and Philip N. Howard focused on the use of cyber troops or troll armies by governments, the military, and political parties in 28 countries.

The researchers made an inventory of the kinds of messaging, tools and communications strategies used across countries as well as the different organizational forms that were deployed by those in power to manipulate public opinion through social media.

They found that in the Philippines, pro-Duterte trolls were engaged in flooding social media with pro-government comments while harassing and trolling social media users with contrary opinions by using of fake accounts and automated bots. 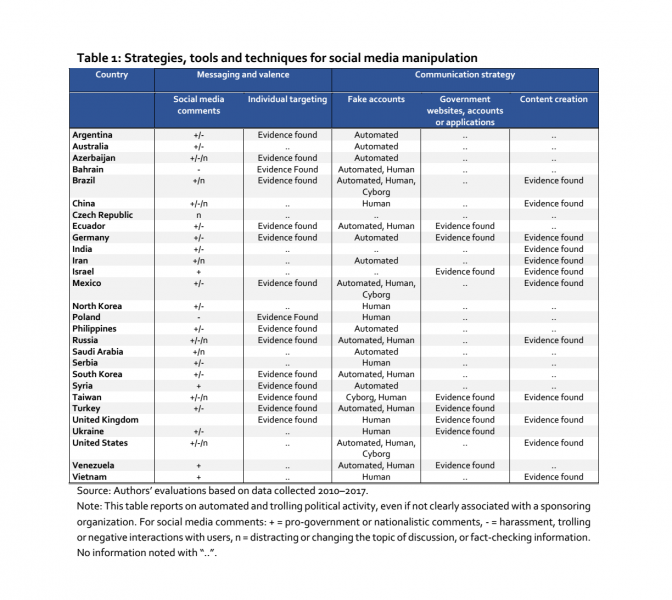 Evaluating the capacities of specific organizations created for gathering cyber troops, the Oxford study outlined that Duterte’s machinery for the 2016 elections not only relied on civil society volunteers and paid citizens, but also hired a private contractor: Nic Gabunada, former advertising executive and former senior vice-president of TV giant ABS-CBN.

Also assessing the organizational capacity of the Duterte cyber army in terms of staffing and budget, the researchers discovered that it is characterized by ad hoc membership with coordination across teams. As much as 200,000 US dollars or roughly 10 million Philippine pesos has been spent to fund the Duterte troll army, which has a regular staff capacity of 400-500 individuals, according to the study.

And as if to confirm the findings of the study, social media trolls and pro-Duterte bloggers quickly took to social media to condemn the Oxford study and Oxford University, flooding the institution’s Facebook page with acerbic posts. 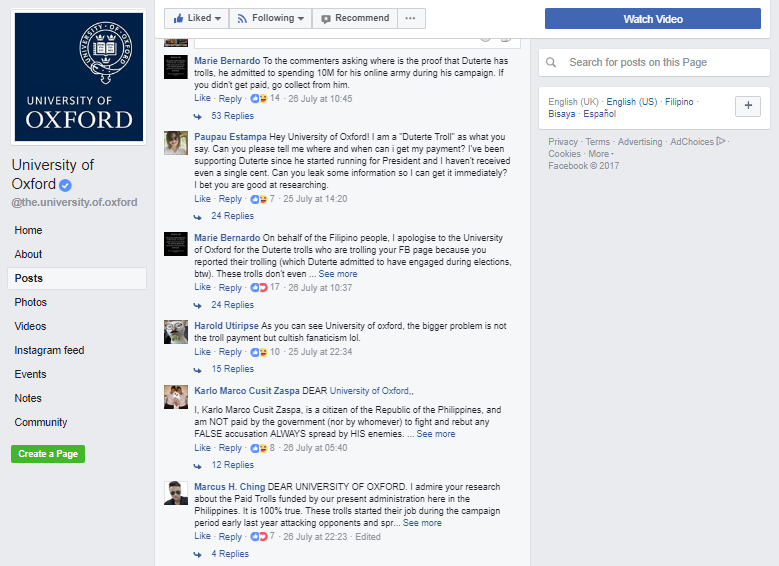 Screenshot of University of Oxford's Facebook page being flooded with pro-Duterte comments.

In a press conference, Duterte admitted that he did hire online defenders but only for the 2016 election campaign:

Dismissing the idea that government is bankrolling an online army to dominate social media, Duterte swore that he had no more need for defenders online:

Pero ngayon, hindi ko na kailangan [But now, I do not need it]. I do not need to defend myself against attacks. I stated my piece during my inauguration and my campaign.

To cap his spiel, Duterte, tagged by critics as the country's “troll-in-chief” and biggest bully, also attacked Oxford University, one of the world’s leading higher education institutions:

Oxford University? That's a school for the stupid people.

But an official of the president's political party denied that the campaign team hired online trolls during the 2016 election:

For the record, and I am speaking for the party @PDPLABAN, we NEVER hired nor used online trolls.

In the end, it would be best to take Duterte’s outbursts with a grain of salt. With his government regularly being hit for spreading falsehoods and the military establishment itself being criticized for propagating fake news in its counterinsurgency wars, what we now know may just be the tip of the iceberg.