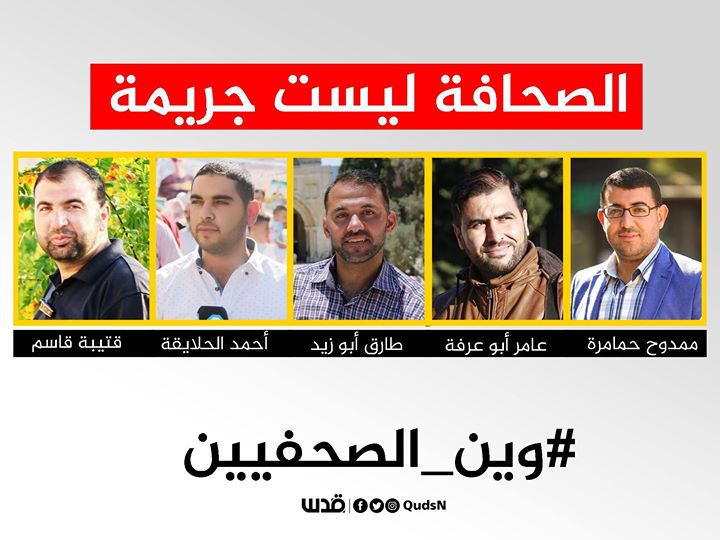 A photo collage of the journalists arrested by the Palestinian Authority. Captions read: “journalism is not a crime” and “where are the journalists”. Source: Quds News Network on Twitter

Just a few weeks after it adopted a controversial cybercrime law, the Palestinian Authority (PA) has has gone after five journalists alleging that they “leaked information to hostile entities.”

The government did not identify the entities in question, but four of the journalists arrested work with media outlets affiliated with Hamas, the political rival of the ruling party in the West Bank, Fatah.

On the evening of 8 August, agents from the Palestinian Intelligence Service arrested the five journalists from various cities in the West Bank. The security forces raided their homes and places of work, and confiscated their phones and laptops.

These journalists include Mamdouh Hamamrah from Bethlehem and Ahmed Halayqah from Hebron, both reporters for Al-Quds TV channel; Tariq Abu Zaid from Nablus, a reporter at the al-Aqsa TV channel; Amer Abu Arafah from Hebron, a reporter at the Shehab News Agency; and Qutaibah Qasem from Bethlehem who is a freelance journalist and a blogger for Al Jazeera.

Their arrests come just weeks after President Mahmoud Abbas signed a highly controversial cybercrime law that stifles Palestinians’ freedom of expression online by criminalizing speech deemed harmful to “social harmony”, “state security” and “public order”. While the Public Prosecutor’s office denied at first any link between the new law and the arrest campaign, it later referred to Article 20 of the law as the justification for the journalists’ arrests.

Article 20 stipulates that any person who uses information technologies to publish news that would “endanger the safety of the state, its public order or the internal or external security of the state” will be imprisoned for at least a year or will be fined a minimum of $1400 USD.

The Reconciliation Court issued orders to keep the journalists in detention for a number of days, but they were then released instead on bail on 15 August with no indictment. Relatives of the journalists believe the arrests were a politically motivated retaliation for the June 8 arrest of journalist Fouad Jaradeh, a reporter for the PA's official broadcast TV, who was arrested in Gaza by Hamas officers.

The clamp down on journalists has caused an uproar among other Palestinian journalists and activists who have launched a campaign on social media platforms under the Arabic-language hashtasg #وين_الصحفيين ( ‘where are the journalists’) and #الصحافة_ليست_جريمة (‘Journalism is not a crime’), to demand the immediate release of the journalists, and denounce the PA's use of the cybercrime law to repress media freedom.

The goal of the cybercrime law, which the authority enforced against the journalists, is to silence any voices opposing the government or inciting resistance against the occupation #Journalism_is_not_a_crime

The cybercrime law compels journalists to lock their mouths

Holding signs that read “journalism is not a crime”, families of the arrested journalists as well as other activists and journalists protested in Ramallah on 12 August against the PA’s rising repression of media and public freedoms and its passing of the new cybercrime law.