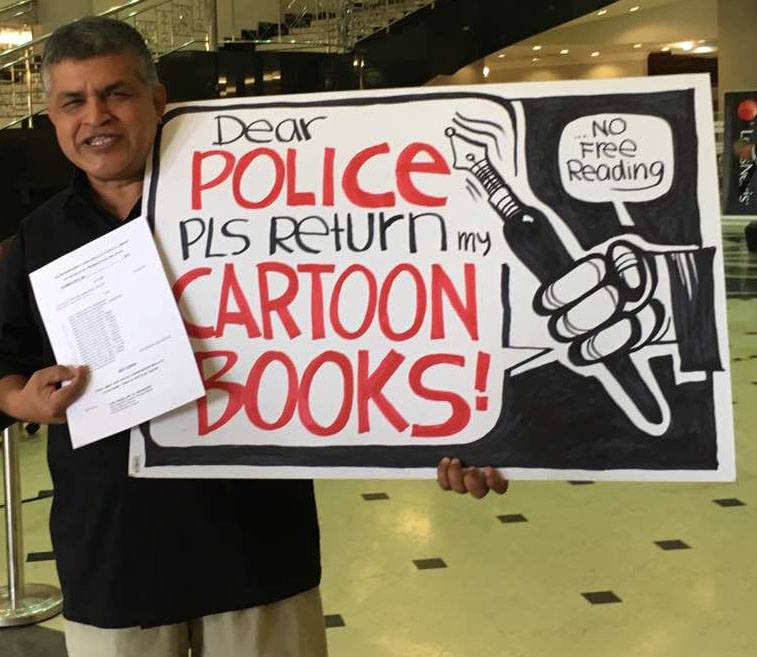 Zunar is demanding the police to return 1,187 books and 103 t-shirts which were seized during his arrest last December 17, 2016. Photo from the Facebook page of Zunar Cartoonist Fan Club

Malaysian cartoonist Zulkiflee S.M. Anwarul Haque, more popularly known as Zunar, has filed a case against the police for arresting him and seizing his cartoon books and t-shirts on December 17, 2016.

Zunar accused the police of making an unlawful arrest and confiscating a total of 1,187 books and 103 t-shirts during an event which he organized to meet his fans and raise funds. He explains his reason for taking legal action:

My books are not banned and I was only selling them to my fans during the fundraising event. What is wrong with that?

Zunar has been arrested several times in the past few years and charged with sedition for his cartoons that criticize government policies, abuse of power by the ruling coalition that has dominated Malaysia’s politics since the 1950s, and curtailment of civil liberties. Many of Zunar’s cartoon books have also been confiscated by authorities for allegedly threatening national security. Zunar has won recognition in and outside Malaysia as a press freedom fighter. He has won accolades from Human Rights Watch, the Committee to Protect Journalists and Cartoonist Rights Network International.

His December arrest was tied to a police investigation of him under Section 124C of the Penal Code for “activities detrimental to parliamentary democracy.”

He was interrogated for six hours and released after the police told him that “they will apply a law to ban all my books.” He issued this statement shortly after his release:

I would like to point out my stand: talent is not a gift, but a responsibility. It is my responsibility as a cartoonist to expose corruption and injustices. Do I fear jail? Yes, but responsibility is bigger that fear. You can ban my books, you can ban my cartoons, but you cannot ban my mind. I will keep drawing until the last drop of my ink.

Zunar could be referring to the corruption scandal involving the prime minister and 1MDB, a state-owned investment firm. The prime minister is accused of pocketing 680 million US dollars through alleged anomalous transactions made by 1MDB.

Zunar’s lawyer, N. Surendran, said the filing of the case against the police is intended to warn authorities about making another illegal arrest:

There will be no more tolerance for this kind of unlawful behaviour against a person whose only crime is to criticise the authorities. That is the democratic right of every Malaysian.

Zunar is demanding the police to return his books and t-shirts.