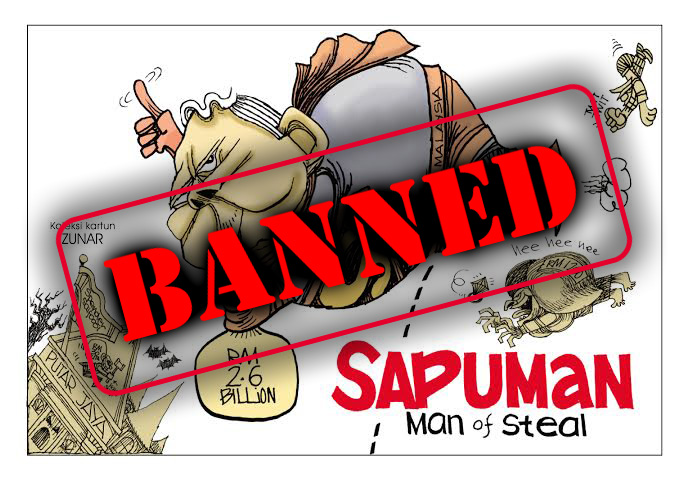 Malaysia’s Home Ministry has banned the sale and distribution of books by Turkish author Mustafa Akyol and two Malaysians, Ahmad Farouk Musa and Faisal Tehrani, for being “prejudicial to public order.” The order was signed on September 6 but was not reported until September 28. Akyol, Farouk and Faisal all promote a moderate and progressive Islam through their books.

Malaysia has a majority Muslim population and a government that claims to promote the harmonious relation of all races and religions in society. But in recent years, some hardline Islamic leaders and political groups have ascended in various state institutions and have used this platform to promote and impose a more strict interpretation of religion in governance.

Case in point is the brief detention of Akyol in Malaysia on September 25 after religious authorities accused him of teaching Islam without getting official authorization from the government. Akyol, a prominent journalist and scholar, was invited by Malaysia’s Islamic Renaissance Front (IRF) to give a series of lectures on Islam, human rights, and democracy.

And now… Malaysian authorities ban my book, “Islam without Extremes: A Muslim Case for Liberty,” which was published in Malay a year ago. pic.twitter.com/a704FbIXe7

Farouk Mousa, a member of the IRF, accused the government of bigotry and anti-intellectualism:

By banning books that provoke the mind to think critically, this government of ours showed its true colour of being an authority of bigotry and anti-intellectualism.

Tehrani said the recent ban on books proved that the ruling party which has been in power since the 1950s has already “reached a state of crisis and madness that aims to control society and people’s minds.”

“When the government is faulty, drawing cartoons is a duty”

Zunar, who was previously arrested on sedition charges for his cartoons, has won wide recognition for his work, earning accolades from the Committee to Protect Journalists and Cartoonist Rights Network International among others. Zunar's 10 other book titles are still banned by the government. 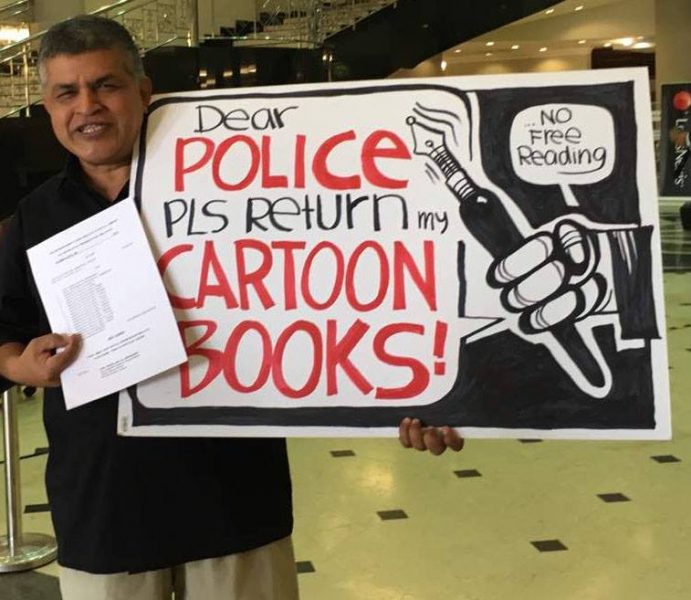 Zunar demanding the police to return 1,187 books and 103 t-shirts which were seized when he was arrested in December 2016. Photo from the Facebook page of Zunar Cartoonist Fan Club

On Twitter, he urged authorities to respect the freedom of artists.

Malaysian government announce the banning of Zunar's cartoon book, “SAPUMAN, MAN OF STEAL.” So far 11 titles of Zunar books have been banned pic.twitter.com/DPPGECvBrw

Referring to the prime minister implicated in a corruption scandal involving hundreds of millions of US dollars, Zunar continues:

I don’t make fantasy cartoons. My cartoons are results from my reaction on current issues, especially on corruption. Do not blame the cartoonist if politicians steal billions.

Zunar said he will challenge the ban in the courts and vowed to continue drawing even if his books are banned:

Karima Bennoune, United Nations Special Rapporteur in the field of cultural rights, warned that banning books “could lead to a failure to engage in much-needed debate.”

concerned 2 hear of the banning of books, incl about moderate & progressive Islam when the government extols those concepts abroad #Malaysia https://t.co/HZ4iOBKbAo

Muslim preacher Wan Ji Wan Hussin questioned the basis for banning the books by Akyol and other local scholars:

Likely to alarm public opinion? Only those with weak intellect will feel alarmed.

Such moves (book banning) are done by people who are against civilisation (Malay: tamadun). Those who are pro-civilisation would celebrate and take pride in intellectuals and their work.

In an interview with Free Malaysia Today, Eric Paulsen of the local group Lawyers for Liberty asserted that it is wrong for the government to prevent the public from accessing information:

Why restrict knowledge? Why allow the government to decide what can or cannot be read, and what is the right or wrong interpretation of a particular issue, no matter how sensitive?

The Home Ministry invoked the Printing Presses and Publications Act to justify the banning of books that are deemed harmful to public interest. Last July 2017, the Home Ministry also ordered the banning of a book on Islam and constitutional democracy. Perhaps it is time for Malaysia to review the arbitrary use of the law by authorities in restricting free speech in the country.