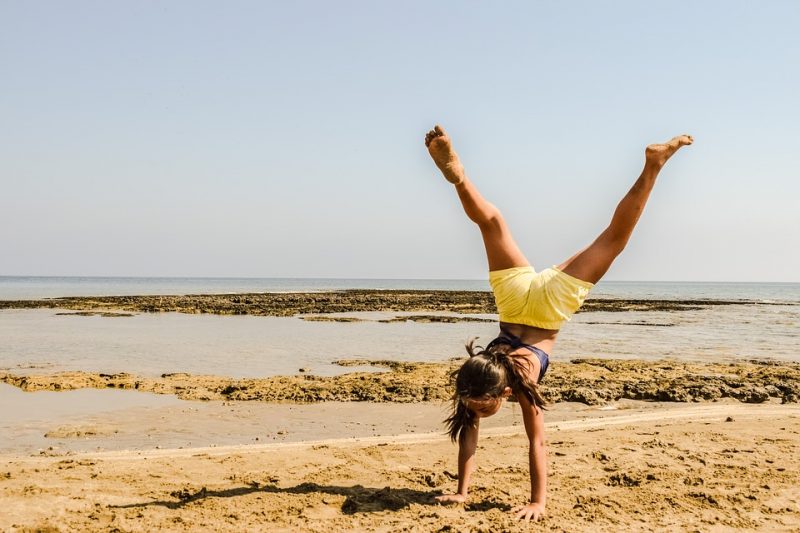 Photos like this could now be labeled “pornographic” by Weibo's supervisors. Photo by dimitrisvetsikas via Pixabay (CC0)

The policy is already having adverse effects on users, particularly young women, whose photos are being labeled “pornographic” if they show a woman's leg, abdomen or cleavage. Users who are found to violate the rules may have their “social credit” scores reduced, which can limit to their ability to use the platform.

The investigation of Tencent, Baidu and Sina Weibo

The Cyberspace Administration's Beijing and Guangdong offices launched a comprehensive investigation into Chinese internet companies Tencent, Baidu and Sina Weibo on 11 August 2017, charging that their social media platforms had violated newly passed Cybersecurity Law and were not adequately managing information published by their users.

After one month of investigation, the authorities concluded on 25 September that the three had violated Article 47 of the Cybersecurity Law by hosting “information of violence and terror, false rumors, pornography, and other information that jeopardizes national security, public safety, and social order.”

Article 47 of the Cybersecurity Law requires network operators to effectively manage content published by users. In contrast to major technology companies in the United States, such as Facebook and Google, these Chinese internet giants are now obligated to proactively censor illegal content and report it to the authorities.

Accordingly, the three companies were given the “heaviest fine” based on Article 68, which states the maximum fine is up to RMB 500,000 yuan (approximately 76,000 US dollars).

On 30 September, three days after the authorities’ fined Sina Weibo for violating the Cybersecurity Law, the company posted a notice on its official account inviting users to apply to become one of 1,000 “Weibo supervisors” — a team under the supervision of the Cyberspace Administration:

To enact corporate responsibility, motivate netizens to actively monitor [online content], clean up the Weibo community environment and handle the pornographic and harmful information on Weibo, under the supervision of the Beijing Cyberspace Administration, Weibo is launching a community supervisor system and recruiting 1,000 supervisors from the community. The Weibo supervisors will report on pornographic, illegal and harmful information circulating on Weibo through a special reporting channel. The site will release monthly subsidies [to compensate supervisors for their work and internet connection cost] based on these statistics. At the same time, those who file the most reports will receive special gifts, including iPhones, local brand cell phones or notebook computers.

While there are many pro-government comments supporting Weibo’s decision, one can still find a number of critiques online, including the following:

This is another mobilization of the masses against the masses. How do they define harmful? How do they make sure these people are qualified to do the content review? Who makes the final call [for censorship]? What is the difference between the “Weibo supervisors” and the community manager [a system set up a few years ago for community reporting]? What is the relationship between deleting a post and deleting an account? Is there any rule? Without openly and transparently stating rules, or specifying the operation and consequences of violating content rules, how can you kickstart the system?

No comment. As a platform, how can you set up standards for inappropriate content? Your principle should be open platform. Doesn’t this look like open recruitment of Chengguan [city management officers responsible for sanitation and environment who are notorious for their abusive use of power]? If there is any illegal content, we have courts and lawyers [to decide this].

Ordinary photos of young women are now labeled as ‘pornographic’

Weibo supervisors have been reporting content violations for more than a week now, and a group of female users are already feeling its effects.

One Weibo user explained the system and impact in detail:

Let me sum up the impact of Weibo supervisors on my friends and my friends’ circles. They have affected many cute girls.

Recently, many cute girls probably have received a message from a Weibo administrator notifying them that their scores will be reduced because someone has reported their photos showing their legs, cleavage, sexy swimwear. In the past, these were treated as ordinary photos. Now that they are labelled as pornographic, two points are taken away from the user account for each photo. Some of the cute girls who had always maintained an 80 score have been reduced to 40 in the past few days, some even lower. If your Weibo score has been reduced to lower than 40, no one can follow you and your post cannot be shared, which means all the fun has vanished.

According to the content deletion notification, when a supervisor files a report, the content in question is submitted to a company administrator, who reviews and if necessary deletes the content and sends a notification to the user. The notification also says that the user can appeal for another review.

The Weibo credit system was first introduced in September 2013 to crack down on the spread of “rumors” or information coming from independent sources not approved by the state. Each Weibo user begins with a social credit score of 80. They will lose five credits if a post of theirs is flagged as a rumor and deleted. If the user’s credit score is lower than 40, the person’s content cannot be shared and will not appear on public timelines. When a person's credit score drops to zero, their account is suspended.

The poster continued their explanation of how and why the supervisors were specifically targeting women:

The reason why so many posts are reported is that each supervisor has been given a specific quota every month. They have to file at least 200 reports in exchange for the RMB 200 subsidy for paying internet fees. This means they receive RMB 1 yuan in exchange for one report. If they excel at filing reports, they will get mobile phones as a bonus. Excuse me? No punishment [for abusing power]??? One party can file a report to make money, while the other party suffers from a poor user experience. Some even want to uninstall the app.

Just imagine, in the future, there will no more sexy bottoms, no more legs, no more swimwear, no more pretty ** [breasts] on the front page timeline, can we still be happy? Will people still hang out on Weibo? What I am saying here is not about pornographic materials, but images that reflect a form of beauty.

Male users are less likely to be reported, while female users’ selfies, leg photos or waist photos that show off the success of their workouts are subjected to reduced scores. Are such practices really good? Shouldn’t girls take photos to record their youth?

Yesterday I came across a swimwear costume video of a pretty lady. The video contains no pornographic element, it was very well taken and the color tuning was fine. Usually such videos can be shared 1,000-plus times without encountering any problems. But now, it was reported and could not be circulated on Weibo. It wasn’t easy to produce that video, it took time, money and a great deal of effort in performing the role. The shooting, costume and production cost at least RMB 1,000. Upon spending all these efforts, she wanted to others to praise her, to gain recognition. Now the supervisors have denied everything that she had done for just RMB 1 yuan. This is outrageous.

The power of a Weibo supervisor

The Weibo supervisor regulation also encourages users to file complaints against supervisors abusing their power. Some have started filing complaints or publicly questioned the qualifications of the supervisors.

Another Weibo user started to collect content deletion notifications and shared his observation on Weibo. Below is one of the observations that he made:

#Weibo Supervisors# I have seen four types of content deletion.

First, if the complaint was filed by other Weibo users, it would take 10 complaints to kickstart the review process. The post would be deleted upon review.

Second, if the report was filed by a Weibo supervisor, one report will trigger the review and deletion process.

Third, a cyber police officer can delete the content directly.

Fourth, automatic deletion, not sure who is in responsible.

According to these observations, Weibo supervisors have more authority than online civilization volunteers who have been serving the censorship machine by “spreading positive energy” and reporting on harmful content via the Weibo community system since 2015.

On Twitter, some Chinese users are comparing Weibo supervisors to online Red Guards, who target netizens said to be “politically incorrect.” They also believe that the supervisor system will trigger another round of migration to overseas social media.