#Istanbul10 Human Rights Defenders Have Been Behind Bars for 100 Days 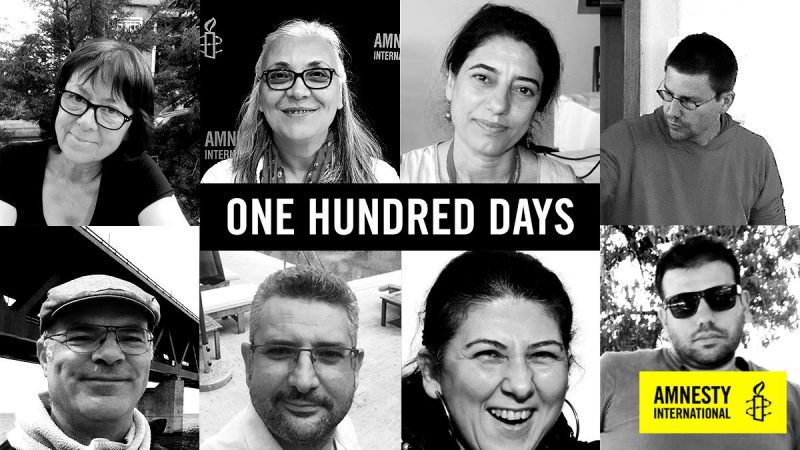 Eight members of the #Istanbul10 who remain in jail in Turkey.

October 12 marks 100 days since 10 human rights defenders were arrested in Turkey during a training workshop. As of this week, members of the group could now face up to 10 years in prison for their work supporting the defence of human rights.

The group had gathered for an information management and wellbeing workshop on one of Istanbul's islands, Buyukada, on July 5 when police raided the workshop, detained the participants, and confiscated electronic equipment including computers and mobile phones. Among those arrested was the director of Amnesty International Turkey, Idil Eser.

Amnesty International Turkey chair Taner Kilic was arrested one month prior to the raid and has been accused of partaking in a so-called “conspiracy” with the 10 defenders. All have since been charged with aiding an “armed terrorist organization” and were indicted this week by the public prosecutor, who is seeking multi-year prison sentences for each individual, according to state news agency Andalou.

All of those facing charges are Turkish nationals, except for trainers Ali Gharavi, a Swedish citizen, and Peter Steudtner, a German citizen.

Authorities have cited no conclusive evidence to support the charges, and the evidence that is cited includes a slide taken from Gharavi's computer with a map of language groups in Turkey, Iraq and Iran, and a sketch with stick people and icons drawn during the workshop by Ozlem Dalkiran, another member of the group. All of those detained have demonstrated over many years of work a commitment to peaceful, constructive protection of universal human rights in Turkey as enshrined in local laws and international human rights norms.

Following a court appearance on July 17, the detainees experienced a brief period of limbo in which some were released and then taken back into custody. Nejat Tastan and Seyhmuz Ozbekli are currently out on bail, but have been barred from travel beyond Turkey's borders, and must report to their supervision officers twice per week.

The truth is that these human rights defenders are being prosecuted not for an elaborate conspiracy, but to silence them and make their work impossible.

On September 19, a group of more than 60 organisations including the Association for Progressive Communications, IFEX, and Article 19, delivered an oral statement at the 36th session of the UN Human Rights Council, calling particular attention to the work of IT consultant Ali Gharavi, and digital strategy and wellbeing trainer Peter Steudtner:

Gharavi and Steudtner were arrested doing their jobs, imparting knowledge and skills that are essential to the exercise of human rights in the digital age, as they have done for many years with civil society groups around the world.

Since August 1, Steudtner has been held in Silivri prison, a high-security prison outside of Istanbul. In a letter he wrote from his cell, he described his daily life in prison:

Everyday life in prison takes place between the opening of the courtyard at 8am and the locking of the cells at 8pm: inspection of attendance, searching the cells, doing our laundry, cleaning the cell, playing chess and backgammon (both self-made boards).

On September 22, the day of the Berlin Marathon, Steudtner ran part of the marathon in solidarity, using the yard of his prison cell. Steudtner's colleagues from Kurve Wostrow, the Centre for Training and Networking in Nonviolent Action, reported that he managed 1,500 rounds of his small yard, running approximately 22.5 kilometres in total.

I always believed in the working methods and principles of the organisation and the importance of human rights; and I will keep believing in them. I am proud to be the Director of Amnesty International Turkey.

October 14 marks Eser’s birthday, a day being celebrated in solidarity with her by groups across the world.

Alongside his IT consultant skills, Swedish citizen Ali Gharavi is also a writer and poet. In mid-September, politics and culture magazine The New Statesman published one of Gharavi's stories. For the past few years, he has been working on a fiction/memoir project about family and migration, from which the story is drawn.

On October 9, Swedish officials summoned the Turkish ambassador for the third time to discuss the case, specifically of Gharavi. On Twitter, Ali’s friends, family, and supporters are sharing posts for him using the hashtag #ForFutureAli and #HaikusForAli.

Both Ali and Peter have been recognised by the digital rights group Access Now as “Heroes” for their activities in supporting human rights defenders to use technology.

We join their supporters in calling for the immediate release of the accused. Share messages of support on Twitter with the #Istanbul10 hashtag and #100DaysTooMany, and learn more about the lives and work of the #Istanbul10.