In Iran, Music Streaming Sites Soundcloud and Spotify Are Back Online

Streaming music websites Soundcloud and Spotify are now accessible in Iran. Screenshot of a music channel based in Tehran called “Iran Music”.

Iranian social media has been filled with celebratory posts since the sudden un-blocking of Soundcloud and Spotify music streaming services on October 17.

There is no doubt that the unfiltering of this popular service will be welcome news for artists and those active in the music community in Iran.

On that same day however, users reported that the platforms’ mobile applications were still inaccessible on the networks of some telecommunications providers.

But Iranians still can't use Spotify

The change doesn't bring much value for would-be Spotify users, who are still unable to register with the website, due to Spotify's internal corporate rules, which explicitly prohibit Iranians from using its services. The company has never officially explained the reason behind this rule.

In the screenshot below, a user explains on a Spotify community forum that his access was recently blocked, even though his subscription came from the US. 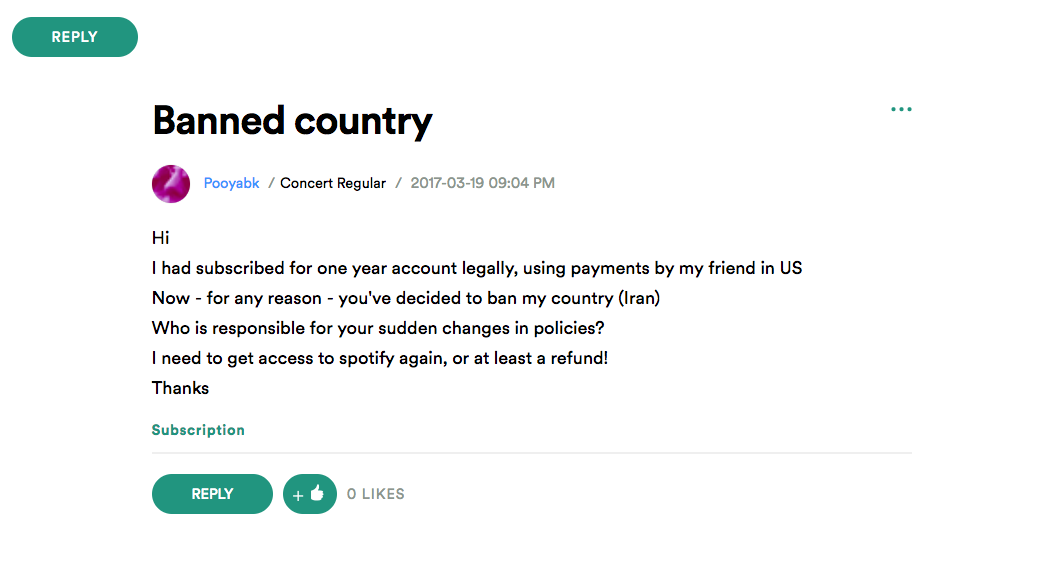 A screenshot of a Spotify user asking the company why his account was blocked in Iran, despite having registered through the US.

Why were these sites unblocked?

The government has made no comment on why these music platforms are suddenly accessible. Some Iranians have interpreted this silence to mean that this unblocking was a mistake by Iran's censors.

By the way, I still think the issue of #soundcloud and #spotify are mistakes and soon enough they will be filtered again. :-/

Others interpreted the move as a deliberate effort to loosen restrictions on internet content.

Blogger Pooria Asteraky thanked the new Minister of ICT, Azari Jahromi, for the decision to make the platforms accessible once again.

Jahromi had previously signaled his intentions to unblock more websites for Iranians. He has also made noise about unblocking Twitter and YouTube, and has suggested that the government was keen to “negotiate” a plan for unblocking Twitter. This has not yet come to pass.