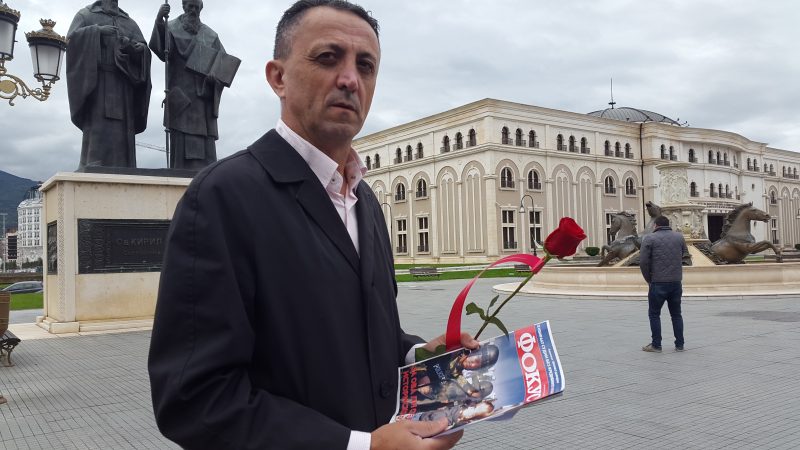 Tomislav Kezarovski on Oct 23, 2015 at memorial of a 2013 protest for his release, which included police intervention against the protesters. Photo by Filip Stojanovski, CC BY.

Macedonian journalist Tomislav Kezarovski can finally expect to be formally exonerated of political charges against him, after nearly five years of struggle.

Kezarovski was sentenced to four and a half years in prison on trumped-up charges in October 2013, but a new court verdict from a related case has de facto exonerated him.

In May 2013, while investigating the death of a colleague, Kezarovski (sometimes also written as Kežarovski or Kezharovski) was arrested and prosecuted for an article he had written in 2008, about a high-profile murder that took place in 2005.

A Macedonian court convicted the journalist of disclosing the identity of a protected witness in his coverage of the murder of 75-year-old Lazar Milosevski and police activity surrounding the killing. Kezarovski had quoted a man who was later revealed to have been pressured by police to act as a false witness, indicating a conspiracy within the judiciary. This allegation was confirmed in a court verdict this week. Previously the key witness changed his initial statement in court, admitted to committing perjury, and was convicted of providing false testimony.

The trial in the Milosevski murder case that was the subject of Kezarovski's 2008 reporting lasted nearly a decade, with five retrials, as the Court of Appeals overturned the initial sentence four times. The latest sentence concluded that there was a lack of evidence to convict the initial suspects for the murder that took place in 2005. Milosevski's family demanded a new investigation and trial involving evidence related to other possible suspects, that was not taken into consideration due to the cover up.

Kezarovski spent the better part of the next three years as political prisoner, under conditions tantamount to torture.

In a 2015 account, he described his living conditions for most of the time he was imprisoned:

Dimly lit cell of 4 by 2 and a half meters, including the toilet. Four, and sometimes five, persons had to live within these 8-9 square meters… As soon as you enter any of these cells, the sharp stench of mold and aroma of urine nest into your nose and throat.

He said the cells were infested with insects, including large centipedes, which crawled over the prisoners when they went to sleep. The toilet was disinfected with hydrochloric acid every Thursday, and prisoners had to suffer inhaling the vapors.

The question of why Kezarovski was prosecuted in 2013 for his work on a 2008 story — a mere five years after the fact — has also loomed large as these events have unfolded.

At the time of his arrest, Kezarovski was working on a story about the untimely death of fellow journalist Nikola Mladenov, who was killed in what authorities said was a “classic traffic accident.” Kezarovski's arrest and conviction effectively stymied public debate about Mladenov's death at the time. 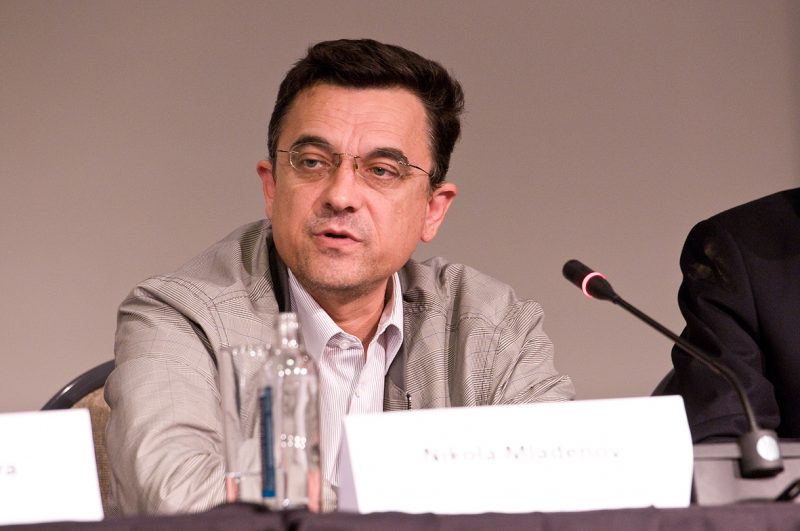 The government's case and campaign against the journalist was officially code-named “Liquidation,” and was condemned by professional journalists’ organizations, human rights organizations and the OSCE Representative on Freedom of the Media. The European Commission also addressed it within the context of wider decline of freedom of expression in Macedonia.

Kezarovski, who spent a year and nine months in detention and several months under house arrest of this case, issued a statement on his Facebook profile this week, following the verdict: 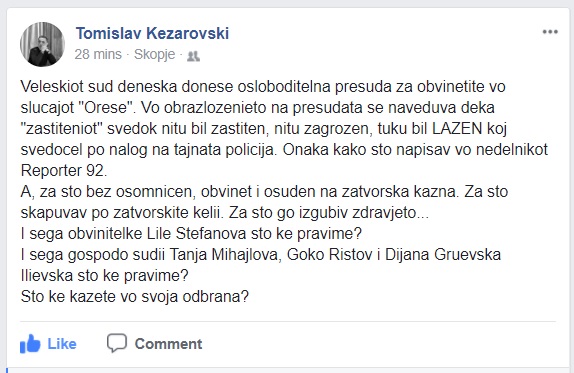 The explanation of the verdict states that the ‘protected’ witness was neither protected nor endangered, but was a false witness who was testifying after being instructed by the secret police just like I wrote about in the weekly magazine “Reporter 92” and for which I was a suspect, the accused and imprisoned.

Why was I rotting in prison? Why did I lose my health for?

And now, Ms. Public Prosecutor Lile Stefanova, what shall we do? And now, judges Ms. Ranja Mihajlova, Mr. Gjoko Ristov and Ms. Dijana Gruevska – Ilievska what shall we do now? What will you say in your defense?

After a series of protests and legal wrangling, Kezarovski was released from prison on probation due to health reasons in January 2015. Since then he had become an advocate for improvement of the basic living conditions in Macedonian prisons.

In 2015 the disclosure of wiretaps conducted illegally by Macedonia's secret police indicated wrongdoing in regard to the investigation of death of Nikola Mladenov. Then-opposition leader Zoran Zaev (who become prime minister of Macedonia May 31, 2017) called for renewal of the investigation.

It is likely that both the investigation into Mladenov's death will be renewed by a reformed judiciary, and that Kezarovski shall press charges against the officials involved in his imprisonment.