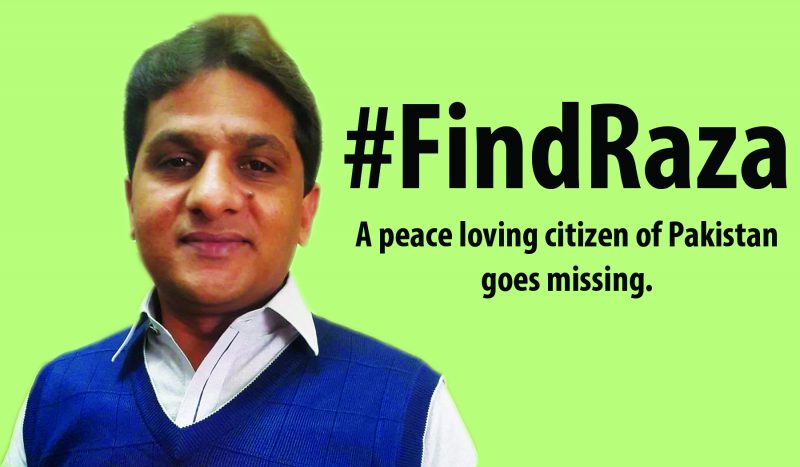 On December 2, 2017, human rights activist Raza Mehmood Khan went missing prompting fears for his safety. Khan was last seen at an open event on extremism in the city of Lahore, Pakistan. Khan, aged 40, was a member of the Aghaz-e-Dosti (Beginning Of Friendship) group, which is working towards building peace between the people of Pakistan and India.

Having searched privately, 24 hours after his disappearance, Khan’s friends and family lodged a First Information Report (FIR) with the police. 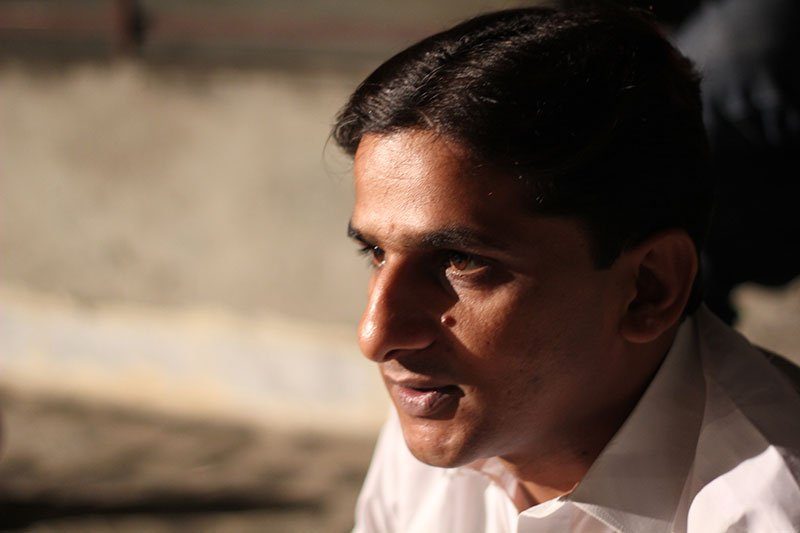 As his family awaits his safe return, activists have launched a social media campaign to build pressure for the authorities to take action. The hashtag #FindRaza is being used to demand his recovery.

A society with a conscious would nurture and celebrate its organic intellectuals, not make them disappear! #FindRaza pic.twitter.com/iXWHppnTwX

#FindRaza
Please spread this message. Raza khan, a young activist from Lahore went missing on Dec 2. We request you to kindly join us in finding him and raising voice in asking the state to find him. pic.twitter.com/RqUiKiCLWv

Journalist Umer Ali tweeted a photo from a protest held in Lahore:

In the Lahore protest against the abduction of a peace activist, Raza Khan, a lawyer asks:
“who's turn is it next? Yours or mine?” #FindRaza pic.twitter.com/WqXVE4lPCD

Saeeda Diep, an activist who had been working with Khan, appealed to Pakistan's president and prime minister for Khan’s recovery through a video message and Naya Daur, an initiative to establish a progressive Pakistan, tweeted:

As a result of the campaign and the filing of the writ by his family, the Supreme Court of Pakistan summoned the police over the missing peace activist's case. One Reuters report stated that:

The Lahore High Court took up the case on Wednesday and the presiding judge, Anwar ul Haq, asked for the officer in charge of the police station handling the case to appear at the next hearing on Dec. 19.

History of missing activists in Pakistan

The issue of enforced disappearances is not new to Pakistan. In early 2017, five social media activists went missing. Like Khan, they were critical of state and military institutions. After 21 days, the bloggers were finally released.

Since their return, they have publicly spoken about torture at the hands of government agencies while in detention. Their interviews allege how military institutions held them hostage along with hundreds of other men in the same detention center, and subjected them to constant abuse and sleep deprivation, along with other forms of physical, sexual and psychological torture that went on for days.

There are 1,498 cases of enforced disappearances pending, with an investigative commission set up by the government to address the situation, according to a report submitted to Pakistan's Supreme Court.

There was also widespread speculation that they were abducted on account of committing blasphemy, a criminal offense under Article 295-C of the Pakistan Penal Code, which grants the death penalty to the offender. Yet, there was no proof of these claims, and no-one took responsibility for their disappearances, which brought hundreds of people onto the streets to participate in peaceful demonstrations to demand the activists’ safe return.

Cybercrime laws in Pakistan: Used for good or bad?

The Prevention of Electronic Crimes Act (PECA), commonly known as the cybercrime law, was passed in 2016 in order to control the levels of cybercrime in the country. But, as feared by civil society organizations, the law has since been used to curb freedom of speech by restraining dissent on online platforms.

Secular Pakistanis argue that religion has become a weapon for anyone to silence dissent. They argue that laws  — such as the cybercrime law — are being used to derail people from expressing their views against the atrocities of state and security agencies.

These sentiments have a place in history: when British colonial rule concluded in the subcontinent 70 years ago, two independent nations came into existence — Pakistan and India. The penal code that was eventually enacted in Pakistan was originally drafted by British rulers in 1860.

While this was rehashed to suit Islamic principles, the gist of the legislation remained the same and after several amendments, the current version is the concoction of Islamic jurisprudence under the shadow of English laws, reinforcing the British colonial mindset and the protection they put forth to control citizens.

One example of this was the amendments to the Constitution of Pakistan in 1985. The infamous dictator, Zia-ul-Haq, who was known for his Islamist sentiments, enforced this law. This not only strengthened the banned militant groups, it harmed the democratic system of Pakistan. These laws, even though they were periodically passed and protected in the name of safeguarding citizens’ constitutional rights, have been, in practice, sheltering the vested interests of the rich and powerful in public office to this day.

Pakistan has long been ranked one of the world's most dangerous countries for journalists, and with the decades-long ‘War on Terror’ that the country has witnessed, people's mobility and freedom of expression have been further reduced to the margins of the imagination.

The most viable way that citizens find themselves manifesting their concerns to a larger audience — and to the lawmakers in particular — has been through online platforms. However, recent attacks on online dissent, in the name of protecting national security or the glory of Islam, have caused fear amongst the public.

The crackdown on dissent and the enforced disappearances of human rights activists is validation enough that the passage of draconian laws and their out of context implementation frequently scrape what is left of freedom of expression for the people of Pakistan.

In the midst of political upheaval, anger over persistent injustice, and attempts to silence the few and vulnerable voices offering alternative narratives to the largely conservative discourse, the last thing citizens of any country might want is to fear for their safety. Yet, in Pakistan, it seems they must.