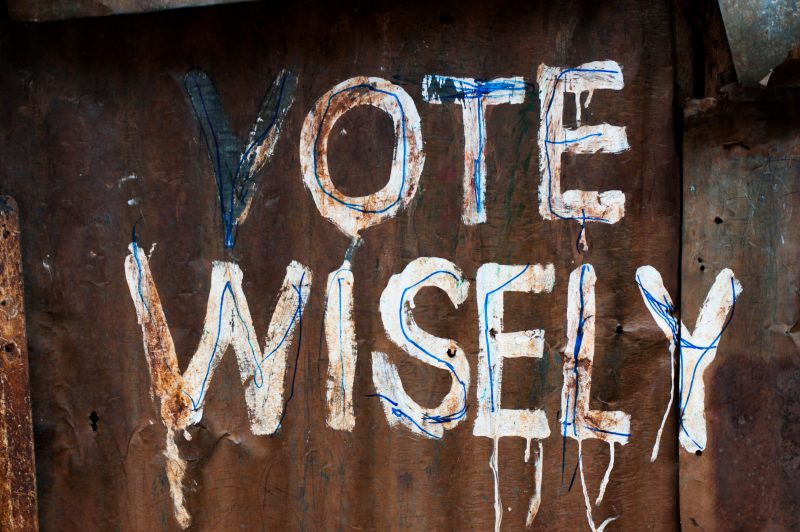 Encouragement on the streets of Kibera in Nairobi, Kenya ahead of election. Photo by Pernille Baerendsten, used with permission.

Elections annulled. Media gagged. A citizen deported. These phrases are easy to find in today's headlines in Kenya.

The ceremonial “swearing-in” was meant to be a symbolic gesture by the main opposition party led by Raila Odinga. But it has triggered a series of events leading to a clampdown on media freedom and a threat to the right of citizenship in Kenya.

To understand what is happening in Kenya, one must begin with the contentious presidential elections of August 2017. After the results showed sitting president Uhuru Kenyatta winning by a slim margin, opposition candidate Raila Odinga challenged the results in court.

On 1 September, the Kenyan Supreme Court annulled the election of Uhuru Kenyatta, due to “irregularities and illegalities” in the system, making Kenya the first country in Africa to have a presidential vote annulled by a court ruling. The court subsequently called for a repeat election.

Some (but not all) Kenyans return to the polls

Raila Odinga did not participate in the re-run, and encouraged his supporters to do the same, arguing that systemic flaws that produced these irregularities had not been addressed, and that a free and fair election was therefore impossible. Repeat elections took place on 26 October and were marked by protests, multiple incidents of violence and destruction of property.

In the repeat election, Kenyatta garnered only 7.4 million votes from a voting population of 19.6 million. His win was upheld by the same Supreme Court.

Due to the dubious legitimacy of the repeat election, and the fact that Kenyatta did not earn the support of even half of eligible voters in Kenya, Odinga's National Super Alliance (NASA) party have since argued that the people of Kenya were denied their right to vote for him as their president.

This became the basis for symbolically swearing him in as the so-called “people’s president” , which was planned for 31 January of this year.

Odinga gets ‘sworn in’ and the media get shut down

Days before the oath ceremony that was set to take place in the country’s capital city Nairobi, President Uhuru Kenyatta and other executive staff were reported to have summoned media managers and “threatened to shut their stations down and revoke their licenses” if they proceeded with the broadcast, which the government felt was a threat to national security.

All the major TV channels ignored this directive and went ahead with the live broadcast. What followed was the switching off of the transmission signals of four privately owned media outlets: NTV, KTN, Citizen TV, its sister station, Inooro TV.

Three journalists at NTV — Linus Kaikai, Larry Madowo and Ken Mijungu — told Reuters that security agency sources warned them they'd be arrested, and that plainclothes officers came to their office and hovered outside the entrance, threatening to arrest them if they tried to exit the building.

The Kenya Media Council condemned the network suspensions and muzzling of the press by the government, calling the situation “the greatest threat and assault on freedom of expression.”

On February 1, Kenya's High Court suspended the shutdown of the affected stations. The government defied the court order for a week, until it finally switched NTV and KTN News back on after seven days, and Citizen TV and Inooro TV after ten days, on 8 February.

‘Anything for them, going forward, will be fair game’

The clampdown on the TV stations’ transmission signals over an event that was largely viewed by Kenyans as symbolic (and not official), left many in shock.

EDITORS’ GUILD condemns move by the government to shut down three private TV stations; calls on the State to rescind the gagging orders immediately. #MediaShutDownKE pic.twitter.com/e3VM7p4rDe

The country is split down the middle on the issues in play. Some have voiced support for the move by the government, “so that it may be a lesson” to the opposition.

People are talking to each other more.

More shocking are the people loudly supporting the government move to shut down the media.A government that has the audacity to shut down media in 2018 is a dangerous government.They have crossed the red line and anything for them,going forward, will be fair game #MediaShutDownKE pic.twitter.com/bL8IJm6T4m

One thing I love about Kenya is when something happens its affects all of us. the Media shut down affected all both jubilee and NASA supporters . That's is how hunger will do with Us Kenyan. #MediaShutDownKE#JamboKenya

A cross-section of Kenyans did not see the shutdowns as an infringement on media freedom or their right to seek information, as many took the time to berate news organizations, arguing that they did not having the interests of Kenyans at heart:

Dear TV Stations,
When you are done with the Government, take time and go for a retreat, and rethink. Re-engineer the whole approach to information industry. Because your consumers are no longer with you. They do not miss you, most are not bothered.#MediaShutDownKE

Day Kenyan media realize that Politicians & Ministers need media as fish need water & when they also always side with the people & not profits, then they will have True Freedom. Look at New York Times & Washington Post.. they are untouchable not even by Trump.. #MediaShutDownKE

Kenyan civil society, however, has condemned the government's actions as violating fundamental rights. The media shutdowns have been followed by intimidation and harassment of journalists, including the aforementioned NTV journalists, and staunch NASA supporters.

Hivos statement: Media shutdown in #Kenya is an affront to press freedom and a human rights violation! On day two of the #MediaShutDownKE we ask: Is it wrong to do the right thing? Read more https://t.co/1s5P8I0mVb pic.twitter.com/AZxNZiBn4z

On 7 February, many woke up to the news of the arrest and deportation of Miguna Miguna, the barrister who oversaw the swearing-in of Odinga as Kenya’s “people’s president”. Miguna is a writer, solicitor, and firm supporter of NASA.

Miguna was deported to Canada on 7 February, in what many government authorities described as his “return home.” Miguna was born in Kenya, but also holds citizenship in Canada. He had run for Nairobi governor — and was cleared by the electoral body to do so — in the 2017 election, but he lost.

This recent turn of events has brought to the fore the question of citizenship. Many Kenyans are split on whether the government had a basis and legal right to deport a Kenyan citizen out of his country, though the constitution clearly protects the citizenship of any person born on Kenyan soil.

In a press statement released by AllAfrica.com, Miguna described the events that led to his deportation. The Ministry of Interior claims that he revoked his Kenyan citizenship, which he holds by birth, but Miguna said he had never done so.

Miguna subsequently filed suit against the government and on 15 February, Kenya's High Court ruled in his favor. Justice Kimaru said that Miguna's deportation “had no merit in law” and ordered authorities to relinquish his Kenyan passport within seven days.

Many Kenyans have expressed their anger at the latest government move in what is a clear violation of the human rights of a Kenyan citizen, whose only offense was to use his power as a barrister to legitimize Odinga's symbolic swearing-in.

How can you say someone born in Ahero, who went to Onjiko High School, NYS training at Gilgil before joining UON not a Kenyan. Do you guys even have Conscience? @OleItumbi , Power is fluid it won't last forever, that's Miguna @MigunaMiguna at UON #migunadeported pic.twitter.com/b43QzgHC6v

The media clampdown, disregard for the Kenyan judicial system by the executive branch, and the illegal deportation of a Kenyan citizen despite a standing court order is going to have far-reaching implications for human rights in Kenya.

With the recent events, the illusion of an independent Kenyan media that is free from state interference has evaporated. The disregard for human rights continues to play out in the local and international media as Miguna Miguna continues to fight his extradition from Ontario, Canada.