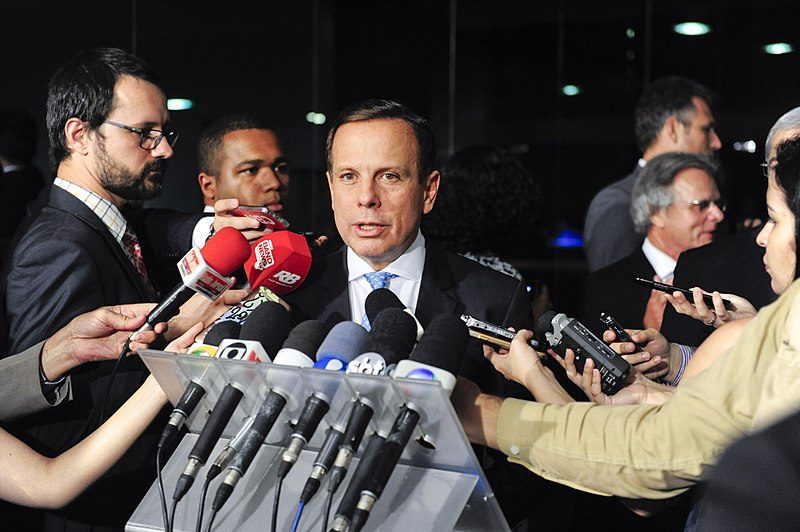 Mayor João Dória takes question from major media outlets, but not from all citizens. Photo by Jonas Pereira/Senado Federal via Wikimedia Commons (CC BY 2.0)

Moderators for the official Facebook page of São Paulo's city hall are actively blocking users and banning words used to mock the current mayor João Dória, according to a new report by Ingrid Alfaya for local news site R7.

With 350k followers, the page is a popular communication channel between citizens of Brazil's largest city and its administration.

Drawing primarily on documents obtained by R7 via Brazil's access to information law, the report reveals the opaque moderation practices of the page, casting some light on the uncharted legal territory of how official digital accounts of public institutions are administrated when they are hosted by private platforms, such as Facebook.

There are currently 33 words blacklisted by the moderators. Any comment on the City Hall page that includes these words is deleted. Some people who used blacklisted words in their comments on the page report that they have been blocked from commenting on the page altogether. Documents obtained by R7 confirm that there are currently 80 users blocked from interacting with the page.

Among the banned terms are words that social media users have used to mock Dória, such as “prefake” (a wordplay with prefeito, which means mayor in Portuguese), “João Dollar” and “doriagray” (a reference to Oscar Wilde's famous narcissistic character). Comments containing “http” and “https” are also forbidden.

These rules are not explicitly stated in the page's code of conduct. The rules say that moderators will delete comments that promote illegal activities (“including harassment, fraud, libel, discrimination”), that contain “offensive comments, swearing with threatening tone or personal attacks”, “false, distorted or misleading information” and “partisan-political propaganda or favorable and contrary opinions to candidates and political parties”.

But they fail to specify which “offensive comments” are prohibited, or what would constitute false and misleading information. The code also does not say that users who violate the rules may be blocked, nor does it mention a blanket prohibition on all links, which the ban on “http” and “https” seems to imply.

Three Facebook users were quoted in Alfaya's story saying they had comments deleted for criticizing the Dória administration, and one of them was blocked by the page.

The Facebook page also states that it is non-partisan and represents the public interests of the city and its inhabitants. Yet the R7 report indicates that page administrators are not entirely willing to allow for open dialogue to take place between citizens and public officials when the dialogue includes public criticism.

Didn't This Happen With Donald Trump?

A similar situation unfolded last year after Donald Trump blocked several Twitter users from replying to his tweets or appearing in his Twitter feed. A group of these users sued Trump, arguing that his account amounts to a public forum in which he, as a government official, cannot bar people from participation.

The lawsuit argues that by blocking people from reading his tweets, or from viewing and replying to him, Mr. Trump violated their First Amendment right to freedom of speech.

The lawsuit includes arguments that Mr. Trump was imposing an unconstitutional restriction on the plaintiffs’ ability to participate in a designated public forum, get access to statements the government had otherwise made available to the public and petition the government for “redress of grievances”.

Though this marked new territory for such interpretations of the First Amendment, it was not without precedent. In 2017, the US Supreme Court unanimously overturned a state-level ban (in North Carolina) on social media use by convicted sex offenders, on the grounds that the state law violated the First Amendment because social media had become “the modern-day public square”.

Nonetheless, many of legal arguments that ensued hinged upon whether Trump's personal Twitter account could be considered an official channel. The controversy with Mr. Dória, on the other hand, took place on the official page of City Hall — which would leave little leeway for such an argument.

It is unclear how the current Brazilian law could be applied in such a case, despite the country's 1988 Constitution having some robust provisions that enshrine a citizen's right to be informed. Those include the 2011 Access to Information Law, which, among other things, establishes the centrality of online communication by making it mandatory for public institutions to make information of collective or general interest available specifically on “official sites on the world wide web”.

Both cases also bring to the surface broader questions about whether private internet companies — i.e. Facebook and Twitter — should adhere to special obligations when it comes to the accounts of public officials. When a public official blocks users from commenting on their official pages, they effectively censor those users’ voices within a space for civic debate.

This isn't the first time that Mr. Dória has punished social media users for being critical of him. Since the beginning of his term in January 2017, a team of lawyers has been privately demanding that users take down posts he deems offensive. These demands have typically been sent via Facebook Messenger.

A Messenger screenshot from May 2017 obtained by BuzzfeedNews Brazil shows how one lawyer, after introducing himself as a person “from João Dória's legal team”, asked a user to edit a post in which he suggested Dória would end up having eggs thrown at him, in retaliation for his public comments about a general strike that took place in April 2017. Out of fear, the user ended up editing the post as requested. João Dória nevertheless was hit by an actual egg a few months later, during an official trip.

Also in April 2017, the same lawyers won a legal challenge in which they demanded that Facebook reveal the identity of the owners of a Facebook page entitled “Leave the Left Free”, which organized a mock version of São Paulo's Virada Cultural street festival in front of João Dória's house. This was intended to spoof the actual Virada Cultural, São Paulo's largest yearly street festival, after Dória transferred most of the music stages to a racetrack on the outskirts of the city.

Dória's legal team told Buzzfeed that it represents the mayor in a personal capacity and has no links with São Paulo City Hall. But with Secretary of Justice Anderson Pomimi having only recently stepped down from working as an associate of the practice (he resigned in upon taking public office, but remains a shareholder), the line between private and public remains undeniably blurry.