Why did China take its own propaganda film offline? Netizens point to US tech sanctions 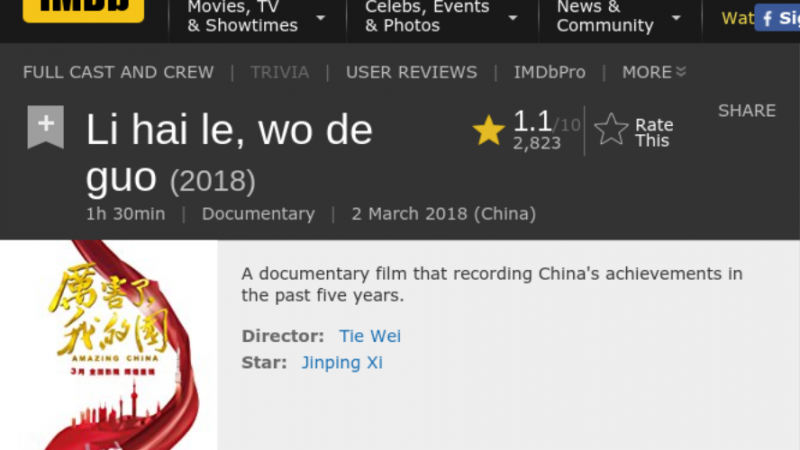 Amazing China, a documentary film that displays China’s achievements in science, technology and poverty reduction under the leadership of Xi Jinping, had suddenly been taken offline.

We are grateful to your company’s support for our copyright business. In order to nourish a harmonious online environment, we are issuing an announcement about the distribution of “Amazing China”

We received notice from the leader of the propaganda department instructing all commercial online video platforms to take down [the film] until further notice. Please follow the instruction seriously and please accept our apology for the inconvenience caused.

The documentary film, which was based on a series of feature reports produced by the China Central Television, was released and shown in cinema on March 2, 2018.

As “Amazing China” is a major propaganda film, a majority of state and party affiliated organizations and companies were mobilized to watch the documentary. By April 14, the film had earned RMB 465 million yuan [approximately USD $105 million], setting a new record for documentary film earnings in China. Below is a trailer promoting the film.

There is no official explanation for why the film would affect China's “harmonious” online environment. Some have wondered if the take-down was just intended to extend the film's time in theaters.

However, Twitter user “Four seasons commentary” posted the take-down notice and speculated that the film was taken down as a response to the new US sanctions of ZTE, a Chinese telecommunications hardware company:

“Amazing China” said China has successfully developed quantum semi-conductors and conducted experiments on carbon nanotubes. Even the US has not mastered such advanced technology. Now that the ZTE incident has been exposed, the grand documentary has to be taken down all of a sudden. Who has harmed our country?

The above tweet references the putonghua pronunciation of Amazing China which is Li hai le, wo de guo. This can also mean “You have harmed my country.”

Last week, the US government banned American companies from doing business with China’s ZTE Corp for making false statements during an investigation of the company’s business deal with Iranian entities.

On Weibo, China's most popular social media platform, many users also see the US-China trade war and the ZTE incident as a heavy blow to China's image as a strong country.

US sanctions on ZTE should have shattered the illusion of “Amazing China”. China was on the weak side in the US-China trade war and could only restrict agriculture imports to press Trump's voters in the agricultural section. But the real impact is small considering the US economy. On the other hand, the US has monopoly status in advanced technology – semiconductors, compression ignition engines, optics, biomedical, new materials, chemical, precision machine tools. Any sanctions on these technological sector products would hit the Chinese industry really hard.

Indeed, the incident has exposed China's vulnerability as a technology innovator. China relies heavily on the import of semiconductors for the manufacturing of computers, mobile phones, aircraft, vehicles and more. Currently, 60 percent of computer chips sold globally go to China every year.

But “Amazing China” tells a different story. The film presents China as a country that once imported chips but has ascended the ranks and now become a major chip exporter. It also suggests that China is leading the world in semiconductor technology.

As anticipated, people reacted to the contradictions between the film propaganda and what appears to be the real story. Twitter user Zhang Yujin said:

It has taken me some time to get a copy of “Amazing China,” a propaganda film for a new era. This is a grand production in which you see China as a chip export country which holds the largest number of chip patents. The scale of performance has broken the world record, etc. I am so confused. How come ZTE did not buy chips from the film director?