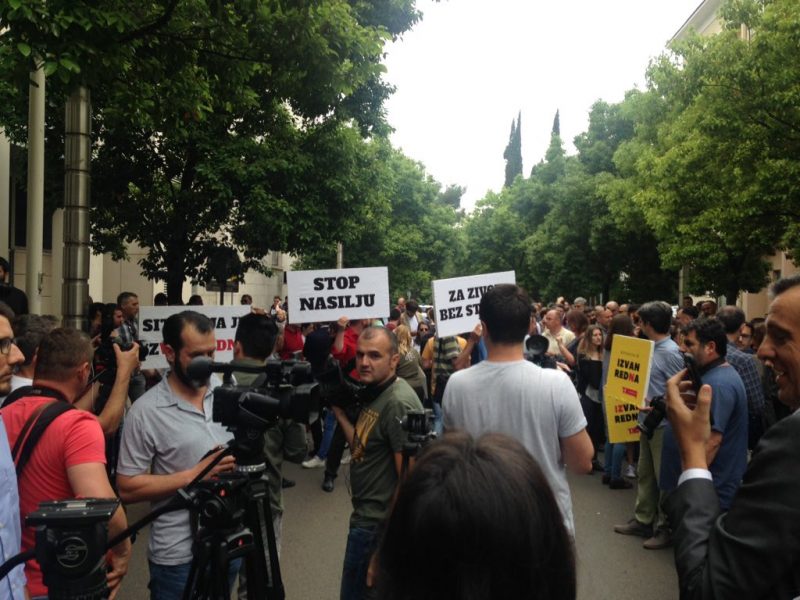 “Stop the violence” protest in Podgorica, 9 May 2018. Photo by Damira Kalac, used with permission.

Montenegrin journalist Olivera Lakić was shot in the leg on May 8, in what appeared to be a targeted attack.

On May 9, several hundred people protested in the capital city of Podgorica, demanding end to impunity for violent crimes and life without fear.

Unknown perpetrators shot Lakic, a journalist with the daily news outlet Vijesti in front of her apartment building in the center of Montenegrin capital. After she fell wounded on the pavement, she saw two men running away. Vijesti reported that while she has to remain in hospital, the wound to her right leg is not considered life-threatening.

With about 643,000 inhabitants, Montenegro is one of the smallest countries in Europe. Since 1991, the Balkan country had been ruled by the same political elite, headed by current president-elect Milo Đukanović. Journalists who report on crime, corruption, business and politics say that intimidation and direct threats are not uncommon.

Balkan Insight reported that Lakic has been attacked in the past. In 2012, she was physically attacked by a man in front of her apartment building, shortly after she had reported on the activities of the Montenegrin Tobacco Company.

Similar to other journalists covering corruption issues in the region, she had been receiving death treats for years.

Local police announced they've “blocked the city,” but no suspects have been apprehended yet.

Yesterday evening Montenegro journalist Olivera Lakic was shot in front of her apartment in Podgorica.

Important to remind that since 2014 three attempted murders, 103 physical attacks against journalists & 257 threats have been registered in the WB.https://t.co/J8N9i65h5S

Journalist Sloba Georgiev compared the situation with that of Slovakia, where massive protests after the murder of investigative journalist Ján Kuciak triggered the resignation of Prime Minister Róbert Fico.

The intensive smear campaign by the Montenegrin authorities against all who express different opinions created fertile ground for a murderer to step out from the dark and shoot our female colleague from Vijesti.

Citizens of Montenegro should react too, maybe like the citizens of Slovakia did.

Association of Professional Journalists of Montenegro (DPNCG) called for protest in front of the government on May 9, noting that:

Countless unsolved instances of attacks, including some which soon become obsolete [i.e. the authorities are no longer required by law to resolve them], create an atmosphere where ambushing a female journalist in front of her home becomes nothing unusual, but a regular event. We are even more concerned in this case because a firearm was used. The only other time this has happened was in the murder of Duško Jovanović…

Social media users from Montenegro are using the hashtag #BezStraha, meaning “Without Fear” when posting about the attack and the protest.

Several hundred people, including journalists, opposition party members and civil society activists joined the May 9 protest in front of the government. Vijesti Director Željko Ivanović said that such crimes are not surprising in a society where all critics of the government of Milo Đukanović are defamed as traitors.

Tweet: Photo story from the civic protest due to the attack on Vijesti journalist Olivera Lakić. #WithoutFear
Signs: “The situation is extraordinary/emergency” [pun]; “Stop the violence”; “For life without fear”; “It's not a standard to get a bomb per capita”;

At the protest, Ivanović said that this attack would not have had happened if the authorities had conducted a proper investigation of the 2012 attack on Lakic. According to him, the institutions gave the impression that they had solved the previous attack on Olivera Lakić by arresting some “lowlife from the suburbs”, but had never identified who ordered the attack on the journalist. 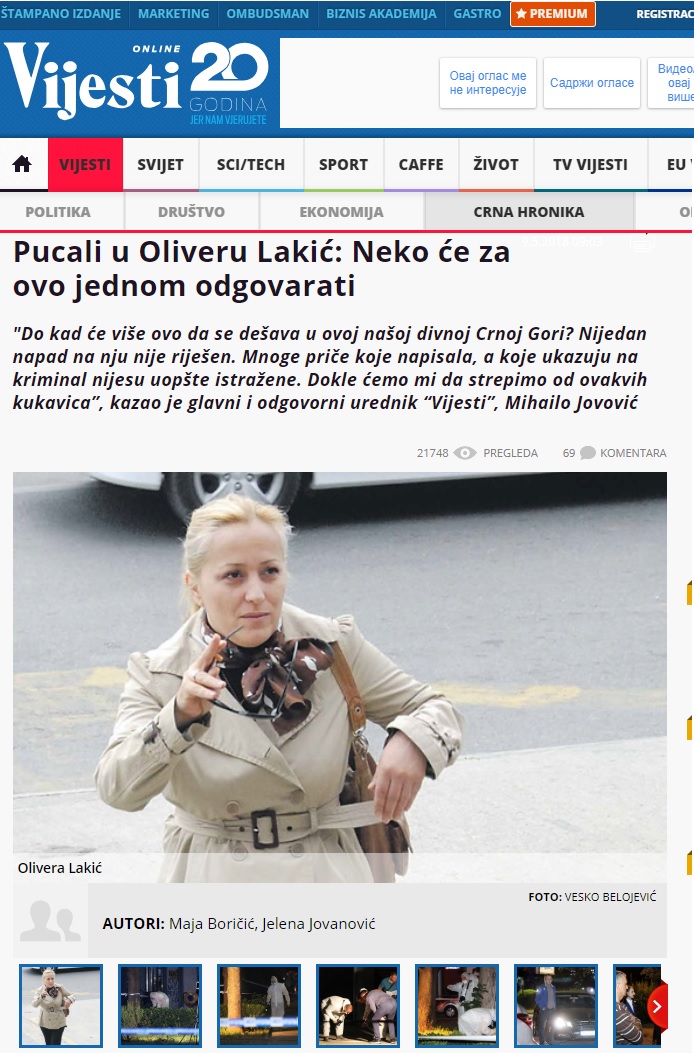 “Olivera Lakić shot: Someone will have to answer for this in the future” – screenshot of a page from Vijesti website.

Nikola Marković, head of the Commission for Investigating Attacks on Journalists, said that they have been warning that a backlog of unsolved cases enables impunity. “None of the cases of attacks against ‘Vijesti’ had been solved properly,” he said at the protest.

#SafeJournalists #SMCG condemns the brutal attack on our colleague Olivera Lakić, journalist of @Vijestime and asks the relevant institutions: how long journalists in ?? will have to fear only because they want to do their job the best they can? https://t.co/DFSUA60hjA

Several hundred citizens gathered in front of the Government of Montenegro to express their dissatisfaction with the latest attack on our colleague Olivera Lakić, journalist of Vijesti daily! #VilenceAgainstJournalists #FreedomOfMedia #Media #Montenegro

NGOs and citizens also contributed with their reactions:

The attack on the Vijesti journalist Olivera Lakić is an attack on the freedom of speech and investigative journalism in Montenegro, said executive director of the NGO Prima Aida Perović Ivanović.

Some citizens also criticized the insensitive statements of public officials, who focused on the gender and not the essence of the attack.

These assertions about this being an “attack on a Woman!” by Government Minister Nuhodžić and his team are horrifying.

Others also criticized the turnout at the protest, which they considered too low.

At the protest, as expected – #Montenegro has no citizens. 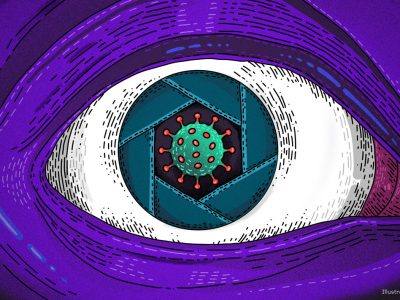 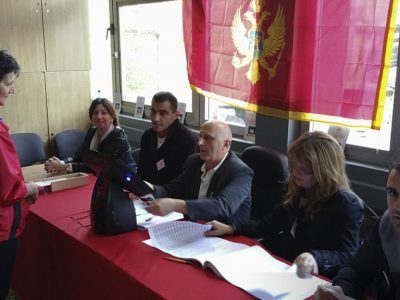