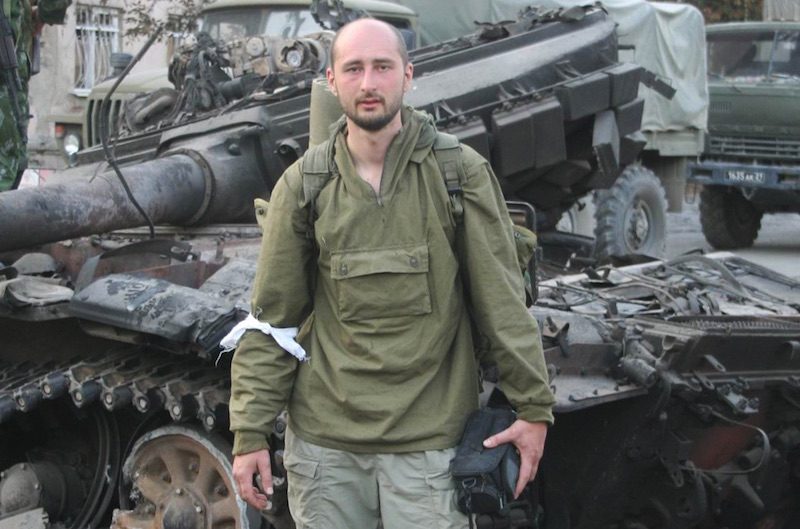 The murder of Russian journalist Arkady Babchenko broke on May 29, with multiple media outlets reporting that Babchenko suffered three fatal gunshot wounds in the back at his apartment building in Kyiv.

The news shook the world, prompting leaders in media and government to express outrage and condolences to his wife and daughter — until it was revealed, just a day later, that the murder was a fake.

At press conference on May 30, Ukrainian officials brought out Babchenko, clearly alive and well, to the shock of all those around him. Officials explained with pride that the incident was staged by the SBU, Ukraine's domestic intelligence agency, as a part of a special operation to stymie an alleged plot to assassinate Babchenko and 30 other Russian political emigres in Ukraine and other countries.

BREAKING: BABCHENKO LIVES. This is unbelievable. Arkady Babchenko lives! I’m at his apartment now and his neighbors are crying talking about him while the security service of Ukraine parades him in front of tv cameras. pic.twitter.com/6NPw6ss4c8

A veteran war reporter and a fierce critic of Vladimir Putin's policies, Babchenko fled Russia in 2017 after a controversial post on Facebook where he refused to mourn the victims of a fatal plane crash. It made him a target of a propaganda campaign on Russian state media and provoked numerous threats on his life.

According to the head of SBU, Vasyl Gritsak, the murder of Babchenko was ordered by the Russian security services, who had recruited a Ukrainian army veteran through a local subcontractor. The price for the execution of the murder was reported to be $40,000.

The plan was allegedly foiled after the veteran contracted to assassinate decided to cooperate with Ukrainian law enforcement and is now as a witness in the trial. In order to convince the conspirators behind Babchenko's assassination of its success, SBU faked a photograph of the ‘dead’ journalist, complete with a pool of pig blood, as Babchenko himself revealed during the press conference.

Ukraine's security services were so visibly triumphant during the press conference that some journalists covering Ukraine found it disconcerting:

Surely, the Security Service knew this was an unusual and shocking operation with a worthy aim. A solemn, serious press conference without victory laps, score settling or gloating would have cost nothing and gone a long way to make it appear legitimate. (5/8)

Other journalists were caught red-faced after sharing heartfelt obituaries and breaking what seemed a genuinely tragic news story at the time:

By lying to the media, Babchenko and the Ukrainian authorities have made fools of everyone who reported yesterday’s “murder.” I apologize to all my followers for circulating what turns out to be total baloney. The lesson here is to distrust reports from Ukraine.

Associated Press reporter Nataliya Vasilyeva raised concern about the implications of the stunt pulled by Babchenko and SBU on the credibility of the media in general:

There's a long list of the the things every journalist gets thrown in the face by people incl: you lie, you distort what people say, you're irresponsible. Now people are going to tell me: and you guys also fake your own deaths! Who knows if (the journalist killed) is really dead?

The incident deeply undermines the credibility of Ukrainian officials and journalists. And in a region where “fake news” and disinformation already run rampant, the prospect of actual events being faked or distorted sets the bar even higher for journalists seeking to report the truth.

Similar concerns were raised by media freedom advocates. Harlem Desir, the Representative on Freedom of the Media for the Organization for Security and Cooperation in Europe, criticized Ukrainian authorities’ decision:

Relieved that Arkadiy #Babchenko is alive! I deplore the decision to spread false information on the life of a journalist. It is the duty of the state to provide correct information to the public.

The Committee for the Protection of Journalists had a similar message:

What is known is that the Ukrainian government has damaged its own credibility. And given the SBU is an intelligence agency, which engages in deception, obfuscation, and propaganda, determining the truth will be very difficult.

After miraculously coming back to life, Babchenko wrote on Twitter that he was “tired” of dying:

Screw them. I won't give them the satisfaction. I made a promise to die at the age of 96, after dancing on Putin's grave and taking a selfie on an Abrams tank on Tverskaya street [Moscow's central thoroughfare] — and I'll do my best to accomplish it. It must be my fate: coming back from the dead every four years. My god, dying is so tiresome. Good morning.

The investigation into Russia's alleged plot to assassinate Arkady Babchenko is pending.