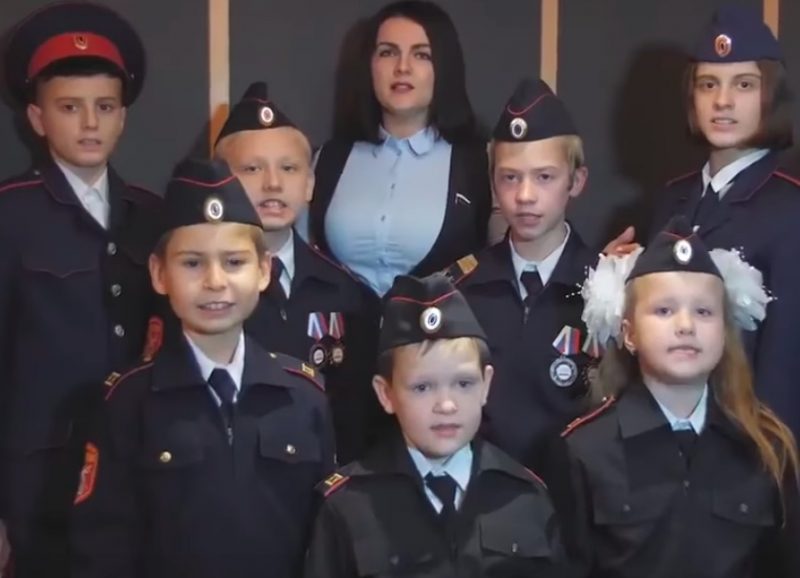 On May 24, 2018, reporter Alexandra Terikova was forced to resign for posting an Instagram video of kindergarten students singing a song for Russian president Vladimir Putin and then giving an interview about it to an independent channel.

Terikova, who works with N1, a small local TV network in Nizhnevartovsk in western Siberia, posted a video of her daughter and other children in their nursery school singing a song with the chorus “Uncle Vova, we are with you!”

Uncle Vova, we are with you. Now in our kindergarten as well. I’m not actually very keen about any commanders leading my Alisa to a last-ditch battle. #unclevovawearewithyou #staples

The hashtag #staples (#скрепы) is a sarcastic nod to Vladimir Putin's annual address to the Russian parliament in 2012 where he lamented Russian society's lack of “spiritual staples” holding the nation together. She also quotes the song's lyrics (Vova is short for Vladimir):

The twenty-first century is here, the planet is tired of wars,
The planet's population is tired of hegemony,
There's no unity in the European Union, the Middle East is languishing in misfortune
And a president across the ocean is robbed of his power.
Chorus:
And our land is the northern seas, all the way to the southern frontiers,
From the Kuril islands to the Baltic shores.
We wish the Earth could live in peace, but if our commander in chief
Beckons to fight the final battle, we are with you, Uncle Vova!
And what will my generation have left,
If we let our guard down and lose the country?
Our truest friends are our Army and the Navy,
The memories of friendship and my grandpa’s red star.
Chorus
We will never surrender this ridge to the Samurai,
We will defend the amber capital [Kaliningrad, Russia’s westernmost exclave] with our lives,
We will preserve Sevastopol and our Crimea for future generations
And we will return Alaska to its home harbor in the motherland.

The song initially appeared last November as a music video directed by Anna Kuvychko, a State Duma (lower chamber of the Russian parliament) lawmaker with the ruling party United Russia. The video, starring students from a local cadet school in Volgograd — formerly Stalingrad, the site of the most ferocious and deadly battle of the Second World War — has a ratio of 17,000 likes to 40,000 dislikes on YouTube and caused a massive backlash online for its jingoistic tone and exploiting children for militaristic propaganda:

On June 6, Terikova gave an interview to TV Rain (Dozhd), an independent TV channel, where she explained that some of her fellow parents in the kindergarten were quite supportive of the performance and cheered on their four and five-years-old kids as they awkwardly sang out lyrics. She protested to the teacher, but her complaints were dismissed, she says.

On June 8, Terikova’s supervisor, her network’s chief executive officer, “very rudely” informed her that “with political ambitions like yours, your place is at the channel you just gave an interview to”, said Terikova in a follow-up interview to TV Rain.

She then posted a photograph of her resignation notice, saying that she was the first Nizhnevartovsk reporter to be fired for her dissident views.

Journalists losing their jobs over critical statements or attending opposition rallies are a common occurrence in Russia. In 2012, Pavel Lobkov, who now works for TV rain, was fired from the NTV channel. In 2015, Konstantin Goldenzweig was fired from the same NTV for giving an interview to a German TV station where he referred to Vladimir Putin's “well-known cynicism.”