Netizen Report: Israeli legislators look at new laws that would stifle speech and surveil the public 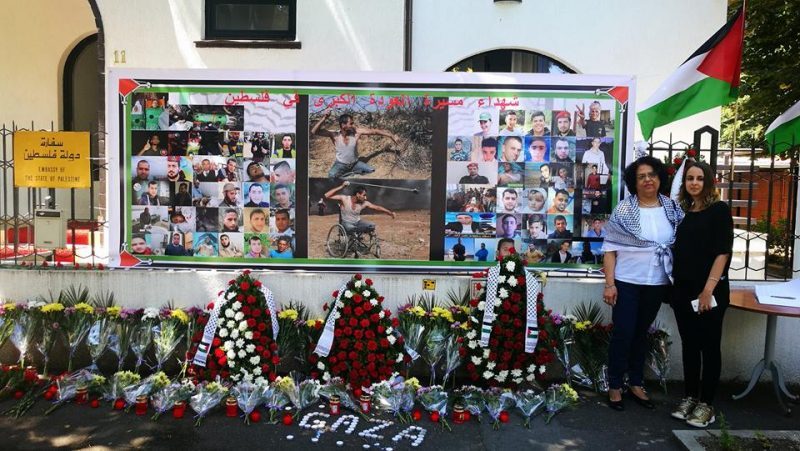 Memorial for the victims in Gaza held outside the Palestinian embassy in Bucharest. Picture taken from @RomaniaPalestineSolidarity on Facebook.

Israeli legislators are pushing multiple bills that would further restrict speech by activists and journalists critical of its policies in Israeli-occupied Palestinian territory.

The first bill would place restrictions on the filming and photographing of Israeli Defense Forces (IDF), prescribing a five-year prison term against anyone convicted of “filming, photographing, and/or recording soldiers in the course of their duties, with the intention of undermining the spirit of IDF soldiers and residents of Israel.” If a court ruled that the photographer's intention was to “harm [Israeli] state security,” the penalty would extend to ten years in prison.

The “Prohibition Against Photographing and Documenting IDF Soldiers” would also criminalize the dissemination of the photos or footage on social networks and mainstream media.

The second bill would streamline processes for government officials to demand that social media platforms remove online content considered “incitement to violence,” and is set to be approved by the Knesset.

A third proposal, the Cyber Security and National Cyber Directorate Bill, would create a government unit tasked with identifying and monitoring cybersecurity threats. The bill would give this unit the authority to access (hack into) private or organizational devices and extract data from them, without prior court approval.

According to Nadim Nashif, executive director of the Arab Centre for the Advancement of Social Media (7amleh), located in Haifa, the unit’s authority to hack into devices and confiscate data has “always been enforced against Palestinians.” Nashif says the government is now trying to legitimize and codify these practices into the law.

Protesters hit the streets of Kampala on July 11, demanding an end to Uganda’s so-called “social media tax,” which puts a levy on the use of 58 different websites and applications, including WhatsApp, Twitter and Facebook. Demonstrators reported that police broke up protests using teargas and physical force, and that several protesters were arrested. Petitioners have also taken the government to court over the tax, arguing that it violates Uganda’s constitution and human rights commitments.

Popular singer Bobi Wine has been a leading voice in the protests on the street and on Twitter, where he tweeted:

…there's no amount of bullets, teargas or arrests that will stop us. Some of our colleagues have been beaten up and others arrested. They must be freed for they have nothing against the police but rather the terrible tax.#PEOPLEPOWER_OURPOWER #ThisTaxMustGo pic.twitter.com/cxgo0No7EF

On July 9, the Islamic Republic of Iran Broadcasting TV network aired video of a series of forced confessions by three high-profile Iranian Instagram users who have been in detention since early May 2018 for posting videos of themselves engaging in “illicit activities” such as dancing. The arrests and subsequent confessions have sparked a broad public outcry.

A man was arrested under Kenya’s new cybercrimes law over a Facebook post in which he described a local legislator as a “devil worshipper.” According to County Directorate of Criminal Investigations (DCI) Zachary Kariuki, the post also suggested “County Senator Ledama ole Kina had allegedly sold his soul to the ‘devil’ and that the MCAs were executive’s bark dogs.”

US court jails man for failing to unlock his phone

After they stopped William Montanez for a minor traffic violation, police in the US state of Florida searched Montanez’ car and found and seized a small amount of marijuana and two mobile phones, which they later presented in court, along with a search warrant. When the judge asked Montanez to unlock the phones, he refused to do so and was promptly jailed for 180 days. TechDirt blogger Tim Cushing described the incident as a “fishing expedition” that could end with Montanez spending “an indefinite amount of time in jail without ever having been convicted of a crime.” His lawyer is appealing the case.

The satirical Twitter account Crudo Ecuador (currently @CrudoEcuador4), well known for commentary and mockery of now-former Ecuadorian President Rafael Correa, was suspended for the third time by Twitter this week. The account’s administrator, who spoke with local NGO Usuarios Digitales, shared a screenshot of the notification sent by Twitter, which indicated that the account had been suspended for “demonstrating characteristics consistent with automation” (or bot activity), despite the account being run by a real person, who posts original messages. The suspension may be part of Twitter’s effort to purge bots and other false accounts.

Legislators in Honduras are considering a proposed law on cybersecurity and hate speech that would obligate website operators to block or moderate “illegal content” and “discriminatory expression” on their sites. Failure to follow the law could result in fines of up to USD $42,000. UN Special Rapporteur David Kaye and Inter-American Commission for Human Rights Special Rapporteur Edison Lanza have asked the Honduran government for further information about the law, and Access Now is encouraging followers to tweet about the harms the law could bring for free expression.

Why does my iPhone crash every time I type ‘Taiwan’?

It has been less than five months since Apple handed ownership of its mainland China data center to the state-owned company Guizhou-Cloud Big Data. Last week, a peculiar bug in iPhone software raised suspicion among Apple users that the company is bowing to requests from the Chinese government. According to cybersecurity researcher Patrick Wardle, certain iPhone models with a Chinese language setting and China location setting were experiencing device crashes when they typed “Taiwan” or received messages with the Taiwanese flag emoji. Apple has released the latest iOS version  11.4.1 to fix the problem.