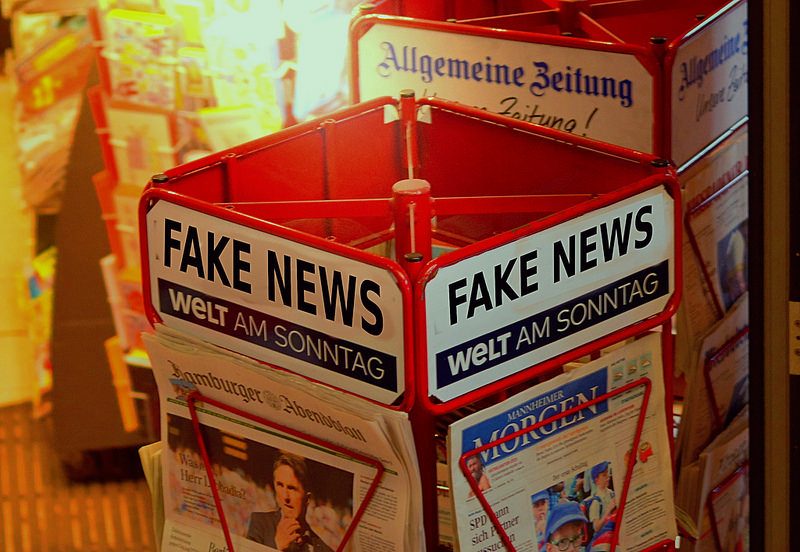 Fake newsstand. Image by freie-presse.net via Flickr (CC BY 2.0)

While media and technology experts in the west have thrown themselves into the fraught and potentially impossible task of figuring out how to identify and reduce the impact of so-called “fake news”, governments around the world are also taking measures against the scourge.

But what counts as “fake”? It depends on who you ask.

On the heels of recent legislation in Malaysia, Philippines, Brazil and France, the latest draft laws on “fake news” come from Sudan and Russia.

Our partners at SMEX reported earlier this week on Sudan’s newly approved Law on Combating Cybercrimes, which would impose steep fines and/or up to one year in prison for “anyone who uses the internet, or any means of communications, information or applications to disseminate any news, rumor or report, knowing it is fake, to cause public fear or panic, threaten public safety and offence the reputation of the State.”

The government says they also want to regulate online publishing. Dr. Sami Abdelhalim Saeed, a specialist in legal reforms in Sudan who spoke with SMEX, emphasized that even with relatively low internet access levels in Sudan, “social media plays a major role in criticizing government policies, and online platforms allow the journalists to publish articles banned by security services in newspapers.”

Meanwhile, the State Duma in Russia — a country that has distinguished itself in many regions as a industrial-strength creator of fake news — is considering a bill that would outlaw inaccurate posts on social media platforms and any website with more than 100,000 daily visitors.

The law would require websites to take down factually inaccurate posts within 24 hours of them being notified of their existence, or face fines of up to 50 million rubles, about USD $800,000.

This would put the onus on websites and social media companies to determine what is inaccurate. Given the stakes, it is highly likely that companies and websites would err on the side of caution and censor all material that might fall afoul of the law, in an effort to avoid fines.

The proposed law is only in the lower house of parliament at the moment. But if it were to pass, it would give the Russian government an even stronger hand in decided what counts as “fake news”.

Last week, the Netizen Report focused on a bill before legislators in Israel, that would have required social media platforms to remove “terror inciting’’ content from the internet. The bill was unexpectedly blocked by Prime Minister Benjamin Netanyahu, who told media that the law could “damage freedom of speech,” and that he blocked its passage “in order to ensure the right of the citizens of Israel to freely express criticism on the internet.” Although originally proposed in an effort to force Facebook and other social media platforms to remove content that Israel deems “incitement”, the bill later was expanded to apply to all websites.

Palestinians already face a disproportionate amount of censorship and legal threats in response to online criticism of Israel and online advocacy for basic human rights protections. Palestinian free speech and human rights advocates expected this law to make things even worse for their communities, but do not expect its failure to generate any positive change.

The government in the state of Manipur, India suspended internet services from July 20-25, in what it described as an effort to curb the spread of “provocative” messages on social media. Local experts say that the suspension was triggered by rising tensions between police and student protesters led by the Manipur University Student’s Union. The New Delhi-based Software Freedom Law Centre’s internet shutdown tracker has confirmed 92 regional internet shutdowns thus far in 2018.

Indian student jailed over a WhatsApp message sent by another user

A university student in Madhya Pradesh, India has been in pre-trial detention for five months, for being the administrator of a WhatsApp group where an “objectionable” message, sent by another user, was reported to police. The student, Junaid Khan, has been charged with sedition, and with violating India’s IT Act. His family says he was not the administrator of the group at the time the message was sent, and that he had been given this status as a default — not by his own choosing.

A joint investigation by the global journalists’ network Organized Crime and Corruption Reporting Project and BuzzFeed News revealed that the first among the infamous networks of disinformation websites from the Macedonian city of Veles were not started by “Macedonian teenagers,” as was widely reported surrounding US elections in 2016, but by several adults connected to right-wing politicians in the US. They’ve also inspired some teen copycats, who later claimed no political affiliation.

Without establishing a direct link to the Veles phenomenon, the investigative reporters also discovered that a Russian operative who specialized in running “troll factories” had a working visit to Macedonia in 2015, at the height of its political crisis, during which Macedonia’s Russia-supported right-wing populist government was grappling with deep popular discontent over corruption.

On July 3, the Indonesia communications ministry blocked the Chinese video-making and sharing app Tik Tok – globally the most downloaded app in the first quarter of the year – while promising to unblock it once it removed all pornography, blasphemy and other inappropriate content. A week later, it had unblocked the app after it said the app agreed to censor content. In the lead up to Indonesia’s national children’s day, the app encouraged users to create educational videos for kids.

The internet censorship analysis group Turkey Blocks confirmed numerous user reports that the Google-owned blogging platform Blogspot — a leading platform in Turkey — was blocked by major internet service providers in Turkey on July 24, leaving millions of blogs inaccessible for subscribers. Access to the platform was restored as of July 25. Turkey’s ICT authority, which oversees internet blocking orders, provided no public information on the matter.

Philippines new site Inquirer.net has removed multiple articles from its site that reported on Philippine Senate President Vicente Sotto’s alleged attempt to cover up accusations of rape of a local actress in the 1980s. In response, the National Union of Journalists of the Philippines issued a statement, saying: “…this humiliating self-censorship  betrays not only the spirit in which the Inquirer was founded, it  betrays a profession whose practitioners have fended and continue to fight off all attempts to muzzle it.”

This statement by CIJ highlights the continuing threats against free speech even after the victory of the opposition last May. The statement cites the sedition case filed against a lawyer-activist who blogged about the relationship of the monarchy and the political elite in Malaysia.