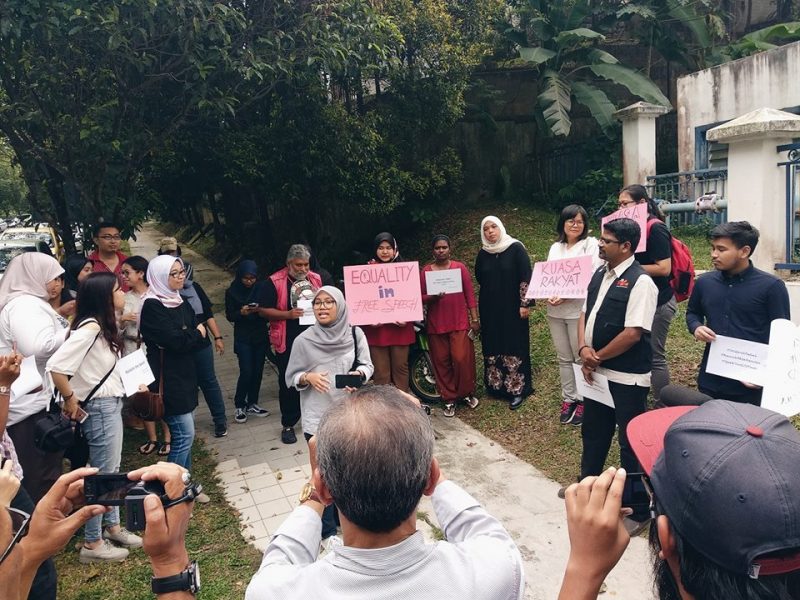 Activists gather in support of lawyer and activist Fadiah Nadwa Fikri who was summoned by the police for allegedly posting a seditious blog article about the monarchy. Photo from Facebook page of Daniel Mizan Qayyum

As it approaches its 100 days in office, has Malaysia's new government fulfilled its promises to protect freedom of expression?

On May 9, 2018, the Pakatan Harapan (PH) party defeated Barisan Nasional (BN) which had held power for the past half century.

During the campaign period, PH released a manifesto pledging to review and potentially abolish regulations that undermine free speech. These include the Sedition Act 1948, Prevention of Crime Act 1959, Prevention of Terrorism Act 2015, Communications and Multimedia Act 1998, and the Anti-Fake News Act 2018.

Since the election, Malaysians have seen some improvements. Independent news websites such as the Sarawak Report and Medium have been unblocked. The travel ban on political cartoonist and activist Zunar, a fierce critic of former PM Najib Razak, has been lifted. But other outspoken voices are still under pressure.

Lawyer under probe for blogging about monarchy

The Centre for Independent Journalism (CIJ) warned that despite the campaign pledge of PH, “violations against freedom of expression are still occurring.”

The group cited the case of lawyer and activist Fadiah Nadwa Fikri who was summoned by the police last July for questioning the role of monarchy in politics in her blog. Fadiah is now under probe for posting an allegedly seditious online content.

CIJ advised the police and the government to stop using draconian laws while parliament is considering the repeal of these measures:

We call upon the Government to make clear its stand on freedom of expression; to condemn this investigation; and to speedily institute a moratorium on all oppressive laws pending their repeal and/ or amendment…If Malaysia is to undergo true democratisation critical, respectful discourse and debate needs to be fostered and protected.

The article written by Fadiah certainly did not constitute incitement to hatred or violence. She was expressing an opinion on an issue of public interest.

Her right to freedom of expression as a social activist and intellectual must be respected because such are the demands of pluralism, tolerance and broad-mindedness that our founding fathers and mothers wanted for our democratic society and especially now, the supposedly “new Malaysia”.

Deputy Minister Hanipa Maidin, in Prime Minister's Department, reiterated the commitment of PH to repeal repressive laws but asked for patience as the government prepares for broader reforms in the bureaucracy:

I only hope the people can be a little more patient with us, just as we have been very patient with BN over the past 60 years…This is because there is far too much damage left by the previous regime for us and for you. This is not an excuse, but a sincere request from us.

Another official affirmed the intention of the government to remove controversial laws such as the Anti-Fake News Act and the Security Offences Special Measures Act (SOSMA).

A welcome development was the decision of the government to withdraw the nine sedition cases it filed against political cartoonist Zunar. This was confirmed by Zunar himself through his Twitter account:

FREE AT LAST!!
All sedition charges (9 altogether) against me has been dropped. The “Fight Through Cartoon” prove to be worthy. But the battle is not over yet. Dangerous “Cartoon-O-Phobia” virus is now infecting all politicians around the world pic.twitter.com/ykD3a14pDc

Zunar was a prolific and prominent cartoonist who criticized the corruption and other abuses of the previous government. Aside from being charged with sedition, his drawings were confiscated by the police and he was prevented from leaving the country.

The Penang police also said they will return a collection of Zunar's books, t-shirts, and other artworks that they confiscated from him in 2017.

Malaysians continue to face significant challenges as they campaign for greater freedom and democracy in a society undergoing transition in governance. It is reassuring that the new government has not yet reneged on its vow to pursue legislative reforms that will strengthen media freedom and human rights protection.

We hope this new government is in fact new, and will back up their rhetoric with committed and decisive action. In these crucial early days, as the government sets the tone for its administration, we hope to see a genuine departure from the old oppression, and a transition into a Malaysia where all ideas can be discussed peacefully and our constitutional rights exercised maturely.