Facebook bans 196 pages in Brazil, attempting to rein in abuse and disinformation 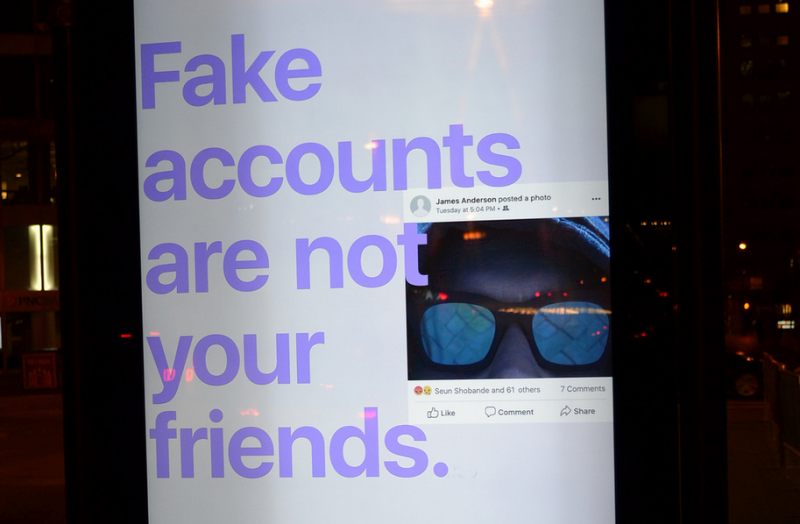 An advertising campaign by Facebook, urging users to avoid “fake” accounts, seen in Chicago, US. Photo by Kevin Tao via Flickr (CC BY 2.0)

On July 25, 2018, Facebook banned 196 pages and 87 profiles based in Brazil, several of which were associated with the conservative group Movimento Brasil Livre (Free Brazil Movement, or MBL), which has played a pivotal role in the rise of online conservatism in Brazil. The pages had a combined total of 500,000 followers.

Shortly thereafter, MBL published a note calling the removals “arbitrary” and accusing Facebook of exercising a political bias against “right-wing leaders and institutions”.

The move comes as Facebook continues to face condemnation and threats of regulatory restrictions in the US, India and the EU, where allegations of disinformation and political agendas promoted by fake accounts reached a tipping point in early 2018. Just last week, the company removed multiple pages associated with the right-wing conspiracy theorist website InfoWars from its platform, reasoning that the website disseminates false information and encourages hate speech, both of which stand in violation of Facebook's policies. Major platforms including Apple and YouTube took similar measures on the same day, citing a similar rationale.

This is not the first time MBL has found itself at odds with Facebook's policies. In May, Facebook partnered with two fact-checking agencies in Brazil, Aos Fatos and Agência Lupa, both part of International Fact-Checking Network (IFCN). Facebook’s move was met with a campaign by MBL, who called the move “an attack on freedom of expression”. They proceeded to discredit the agencies reputations and sharing personal posts and data off their staff in an effort to prove their “leftist bias”.

In an official statement following the removals in Brazil, the company claimed the decision to delete the accounts came after “a rigorous investigation” and that the pages and profiles were part of “a coordinated network that hide under the use of fake accounts and hide the true nature and origin of its content with the purpose of generating divisiveness and spread misinformation”. The note continues:

The actions we are announcing today are part of our ongoing work to identify and act against ill-intended people that violate community standards. We are acting only against pages and profiles that have violated our policies, but we will continue to watch for other types of abuse, and we will remove any additional content that we identify as having violated our rules.

MBL was at the forefront of the demonstrations in 2015 calling for the impeachment of ex-President Dilma Rousseff and represents a key player in the rise of conservative, right-wing political views in Brazil over the past five years.

The movement's growth over the past four years has accelerated thanks to Facebook, where MBL has more than 2.8 million followers.

Despite having described itself as a liberal movement – which in Latin America mainly means defending minimal government – MBL has consistently taken conservative stances, for example positioning itself against the legalization of abortion and education policies regarding gender in school.

An in-depth 2015 report by Agencia Publica identified an association between MBL and the US-based libertarian organization, Students for Liberty, in what appears to have allowed Students for Liberty to receive donations from US groups including the Koch brothers.

False rumors that Franco had been involved with drug trafficking groups started to spread through the internet just a day after her death.

A crucial node in this groundswell of fake news was an article published by Ceticismo Político, a relatively small right-wing website with 25,000 followers on Facebook. MBL, with its million-strong following base, shared Ceticismo’s publication, boosting its reach into the hundreds of thousands of shares on Facebook and millions of impressions on Twitter.

Facebook provided MBL with fertile ground for amplifying and spreading these lies. As journalist Denis R. Burgierman observed in a piece for Nexo, Facebook's technology rewards and amplifies speech that seems to spark interest — even if that “interest” is not authentic:

The problem is that this strategy is imperfect, because the algorithm can be tricked: with money, social movements can be faked. One way of fraud it is to create a false ecosystem: hundreds of pages and profiles, that are actually under the same command, sharing content all at the same time, to pretend a crowd is doing it. This is one way of cheating the algorithm, fabricating the feeling that a topic interests to a lot of people…

When Facebook changed its the algorithm in late 2017 in an effort to give preference to personal posts instead of commercial pages, MBL felt its engagement falling. In March, a report by O Globo newspaper revealed that the group was using an app called Voxer to share its content inside the network. Voxer created post in personal timelines as if they were spontaneous. The app was banned by Facebook after for violating its rules.

How to cheat an algorithm

After a federal prosecutor demanded the information from Facebook, the company published a list of all the usernames and pages that it banned in this recent effort on August 6. Among the pages is the same one that spread false rumors about Marielle Franco.

Pablo Ortellado, a philosopher and professor at University of São Paulo analyzed it the list as follows:

The set of pages and profiles suggests a highly sophisticated practice of attracting users with popular themes, from football or funk music to job posts and comedy. The pages were likely alternating between posting links related to these themes and links to news and disinformation…[thus] tricking users and the platform’s algorithm. […] It is also likely that Facebook took down only a chunk of the fake profiles network connected to MBL, since their main page is still available — if that is true, MBL’s network inside Facebook might be much bigger.

Since the removal of pages and profiles, several right wing outlets and personalities have accused the company of censorship.

But for Miguel Lago, political scientist and one of the founders of the NGO Nossas Cidades, the platform that “gestated MBL” is not censoring it:

Facebook is not hurting freedom of expression to anyone of them. It is a basic principle that all argumentation has to be well substantiated. The freedom to express oneself should not be used as an excuse to profess lies unpunished.

While it is true that Facebook and other similar platforms enable free speech at an unprecedented scale, they are typically unable to consistently enforce their own policies related to abuse, hate speech and disinformation. With consistent enforcement, pages like those of MBL or Alex Jones’ InfoWars might never have lasted on Facebook, as moderators would have swiftly seen that they were violating the company's policies.