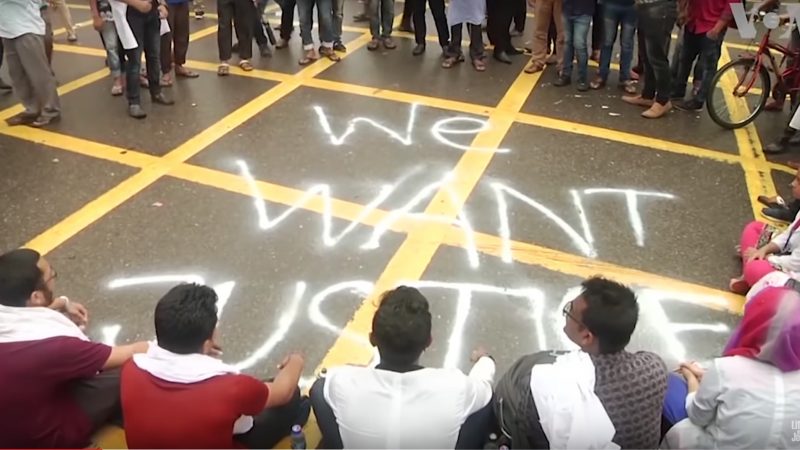 On July 29, Bangladeshi students spontaneously launched a protest movement demanding safer roads and traffic enforcement in the country, after two students were hit and killed by a municipal bus.

Over the course of a week, tens of thousands of students from 6th grade to university level filled the streets, chanting for road security and even directing traffic to prove their point. The protests were widely followed by international media, with Bangladeshi students using hashtags like #CNN #ALJAZEERA #REUTERS and other global media tags to draw attention their cause.

Demonstrations began peacefully but turned violent on August 3 when rumors of police abusing and kidnapping students triggered confrontations between police and protesters, with police resorting to tear gas and rubber bullets.

In a few days’ time, nearly 1,000 people were wounded, among them 45 police personnel.

Use of social media to spread rumors and disinformation generally has been on the rise in Bangladesh, particularly via Facebook, which is the most popular social media platform in the country — in fact, Bangladesh's capital Dhaka has the second highest number of Facebook users per capita among major cities across the world.

The government has blamed social media users and activists for trying to create unrest by sharing provocative posts and content on Facebook. On August 5, in the heat of the protests, police arrested 22 students on vandalism charges.

The government also arrested Shahidul Alam, an acclaimed photographer and civic activist, who had been documenting the assaults on students and journalists. His arrest has been condemned by local and international organizations.

In one of his posts, Dinesh Khanna shared on Facebook:

Shahidul Alam matters because he is our Voice. His life as a photographer, educationist, and thinker has been informed by his activism, his belief in what is just. It is this commitment that has made him one of the most admired international figures in the world of photography and media. Delhi Photo Festival was inspired by Chobi Mela and Pathshala, both founded by him, and we were privileged to have him as the keynote speaker at our first edition in 2011. Shahidul cannot and should not be silenced.

In the days following the protests, Bangladesh police arrested at least 12 social media activists accused of spreading rumors on Facebook during student protests. Among them are prominent media figures like actress Kazi Noushaba Ahmed. Media reports quoting police officials confirmed that the authorities have investigated more than a thousand Facebook profiles which allegedly incited violence during the unrest. DMP’s Deputy Commissioner of Cyber Security and Crime Division Md Alimuzzaman said: “Scrutinizing over 1,500 profiles on different social media, we have found over 150 accounts as vibrant and some 80 to 90 have appeared as highly vibrant.”

In total around 100 people have been arrested so far and 51 police cases were filed. Human Rights Watch said in a statement:

The recent wave of arrests, targeting student protesters and journalists, has created an atmosphere of fear, putting a serious chill on free speech.

Students are gone, traffic chaos is back

Fear of arrests and investigations of online activities has led many students to go quiet on social media — some have even deleted their posts. Meanwhile, Dhaka's roads are back to their chaotic form. The complexity of the problem is often underestimated as a Facebook user writes (link omitted for the safety of the user):

I found one benefit of this recent road safety movement and that's also from my own perspective. Now common people realized that traffic police is not the sole agency to streamline the traffic issue of this city. It is a huge relief. Even the highly educated citizens used to believe that the inefficiency of traffic police was the only cause of traffic jam or if police wanted, they could solve this issue just like this! Now they know there are many issues and agencies [Road transport authorities, Bangladesh bus truck owners association, Dhaka Transport Coordination Authority, Bangladesh Rickshaw Owners Association] are involved, Police is just one of them.

On Friday, August 10, a city bus bumped into the Home Minister's car amidst the Traffic Week which followed the demonstrations. The driver’s assistant was behind the wheel at the time of the accident.