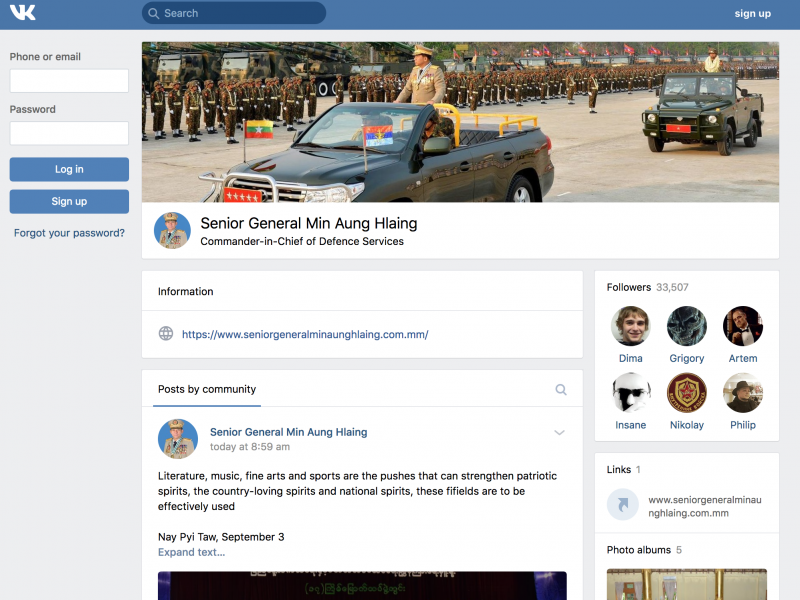 After being banned from Facebook, Myanmar's military chief was quick to create a new account on Russian social media site VKontakte.

Facebook announced its decision to ban a total of 18 accounts and 52 pages related to Myanmar's military, including the account of Senior General Min Aung Hlaing, commander-in-chief of the Tatmadaw (Myanmar Army) on August 27, 2018. The pages had a significant presence on Facebook, with almost 12 million followers combined.

Immediately after the bans were implemented, the office of the Myanmar Military Chief created a new account on Russian social media site VKontakte and gained 2,000 followers within 48 hours. The page had more than 35,000 followers as of this writing.

Facebook justified its removal of the military accounts on grounds that they were using the social media site to promote ethnic violence against the Rohingya people, a claim supported by a United Nations fact-finding mission. In a subsequent report, Facebook added that it identified a covert Myanmar military propaganda campaign on its platform.

The UN group issued a report accusing the Myanmar military of committing genocide against the Rohingya people. Myanmar-born Rohingya people are neither recognized as an ethnic group nor as citizens by the state of Myanmar. Last year, conflicts and military operations in the northwestern state of Myanmar resulted in displacement of more than 700,000 Rohingya residents, many of whom taking refuge in neighboring Bangladesh.

On Facebook, the former presidential adviser and writer Nay Zin Latt has been urging his followers to open VKontakte accounts. His post which accused Facebook of being a “dictator” got more than 5,000 likes and 1,400 shares.

…not being able to log on to social media and post your daily propaganda hurts your ego and ability to change public opinion. But the military is adapting well.

No doubt the reason Myochit are migrating to this Russian platform is the Facebook’s tightening of its policy. That means they are now spreading their hate freely on the site without any moderation.

The blogger also noted that several media outlets have created their pages on VKontakte although it is not known if these are official accounts.

When it comes to social media and online communication, Facebook is far and away the most popular platform Myanmar, so the military move to VKontakte may not result in an instant reconstitution of the massive following that Min Aung Hlaing and other military leaders had before.

Facebook's decision to ban the accounts of Myanmar military officers was met with mixed reactions online. Some lauded it as a timely intervention to stop the spread of hate speech. But some also raised the question of censorship and whether it was consistent with Facebook's policy on removing accounts.

Will VKontakte be a more hospitable platform for these accounts? Not necessarily. Despite Myochit Monitor's interpretation, VKontakte (similar to Facebook) prohibits content that “propagandizes and/or contributes to racial, religious, ethnic hatred or hostility, propagandizes fascism or racial superiority.” Also similar to Facebook, the Russian company is not known for implementing its Terms of Service in a consistent or transparent manner.

Time will tell if the strategy serves the military's best interests.