Wanna compare the world’s largest tech companies on human rights terms? Now you can do it in Korean — and five other languages 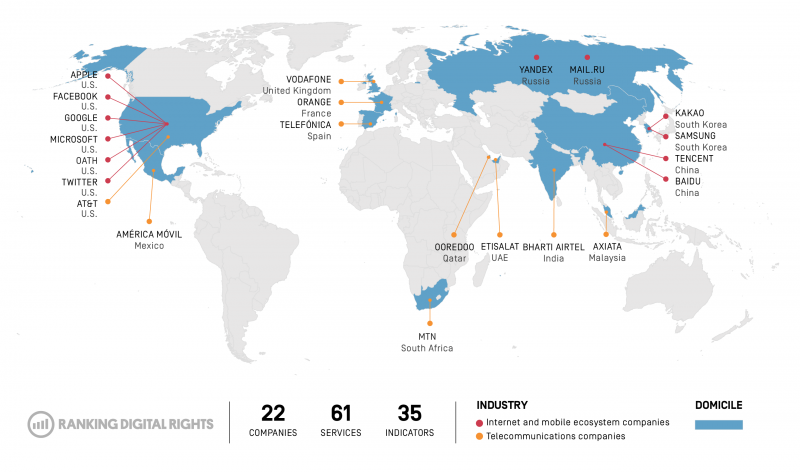 Earlier this month, Google caved in to pressure from Russian authorities and took down videos promoting a protest rally against an unpopular pension reform law. This, reportedly, was the first time that Google decided to comply with a Russian censorship demand. However, actions like these, where Google or other ICT companies fail to ensure respect of users’ freedom of expression and privacy in their policies and practices, have now become too common.

Tech giants and telecommunication service providers are increasingly facing public scrutiny over their direct or indirect involvement in human rights abuses including misusing user data by sharing and selling data without users’ consent to third-parties and censoring legitimate speech at the request of governments are just two ways in which this happens on a regular basis. For telecom operators, the ability to shut down their networks or slow down access to certain services and platforms has been abused at the behest of governments in South Asia, the Middle East and across Africa.

To help shed light on the policies and practices of these kinds of companies, the non-profit research initiative Ranking Digital Rights (RDR) has been working with partners around the world to promote greater respect for freedom of expression and privacy rights among information communications technology (ICT) companies.

In April 2018, RDR released their third Corporate Accountability Index, a ranking of corporate policies affecting freedom of expression and privacy.

For the Index, the Ranking Digital Rights research team evaluated 22 companies from 13 countries (China, France, India, Korea, Malaysia, Mexico, Qatar, Russia, South Africa, Spain, the UK, the US and the UAE), whose products and services are accessed by a majority of the world’s 4.2 billion internet users.

These platforms and services are part of the daily lives of people who access them to exercise fundamental human rights to communicate, access information, express themselves, organize and protest. Yet users remain largely in the dark as companies fall short of disclosing basic information about the design, management, and governance of the digital platforms and services that affect human rights, according to the RDR research.

Companies are evaluated on 35 indicators across three categories: governance, freedom of expression and privacy. Several issues stood out in these areas:

Governance: Too few companies make users’ expression and privacy rights a central priority for corporate oversight and risk assessment. Companies do not have adequate processes and mechanisms in place to identify and mitigate the full range of expression and privacy risks to users that may be caused not only by government censorship or surveillance, and by malicious non-state actors, but also by practices related to their own business models.

Security: Most companies withhold basic information about measures they take to keep users’ data secure, leaving users in the dark about risks they face when using a particular platform or service.

Privacy: Companies don’t disclose enough about how users’ information is handled, including what is collected and shared, with whom, and under what circumstances. This includes how user information is shared for targeted advertising.

Expression: Companies do not adequately inform the public about how content and information flows are policed and shaped through their platforms and services.’’

To make these findings more accessible to companies, civil society, and policy makers in these regions, RDR partnered with Global Voices Translation Services to translate key components of the 2018 Index into six major languages—Arabic, Chinese, French, Korean, Russian, and Spanish.

The two Chinese companies performed poorly in the Index. Baidu earned the lowest score of all internet companies in the Index, disclosing almost nothing about policies affecting freedom of expression and privacy. Tencent was more transparent but it also revealed little information.

A summary of the overall findings of the Index and the company report cards for the Chinese tech companies Tencent and Baidu are now available in Chinese.

The French multinational group group ranked fourth among the 10 telecommunications companies evaluated. While the company disclosed a strong commitment to freedom of expression and privacy as human rights, it lacked transparency about its policies and practices affecting freedom of expression and privacy. It disclosed nothing about how it handles government requests to block content or restrict user accounts, and did not provide enough information about its handling of user information.

A summary of the overall findings of the Index and the company report card for Orange are available in French.

Kakao ranked sixth out of the 12 internet companies evaluated, and failed to disclose sufficient information about policies and practices affecting freedom of expression and privacy. However, the company outperformed Samsung, the other South Korean internet company evaluated, by roughly 21 points. While Samsung disclosed a strong commitment to freedom of expression and privacy as human rights, it lacked transparency about its policies and practices affecting these fundamental rights.

A summary of the overall findings of the Index and the company report cards for Kakao and Samsung are available in Korean.

Yandex and Mail.ru performed poorly in the Index, occupying the ninth and 11th positions, respectively. Both companies disclosed little information about policies affecting users’ freedom of expression and privacy. For example, they revealed almost nothing about how they handle government demands to remove content or to hand over user data.

A summary of the overall findings of the Index and the company report cards for Russian companies Mail.ru and Yandex are now available in Russian.

Telefónica ranked third out of 10 telecommunications companies evaluated, after Vodafone and AT&T. The company disclosed a strong commitment to protecting users’ freedom of expression and privacy, but was less transparent about policies affecting these rights in practice. For example, the company lacked transparency about how it handles user information and what steps it takes to keep user information secure.

América Móvil ranked fifth out of the 10 telecommunications companies evaluated, disclosing little about policies and practices affecting freedom of expression and privacy. For example, the company lacked disclosure about how it responds to government requests to shut down networks, and did not clearly disclose how it handles government or private requests to restrict content or hand over user information.

A summary of the overall findings of the Index and the company report cards for América Móvil and Telefónica are now available in Spanish.

The Index allows users, investors, and activists to compare how—and whether—internet, mobile and telecommunications companies are making substantive efforts to respect freedom of expression and privacy. Advocates can use this information to demand more transparency and action from companies.

Digital rights groups and researchers are also encouraged to use and adapt the Index methodology to produce local research evaluating the human rights policies and practices of companies and services in their regions.