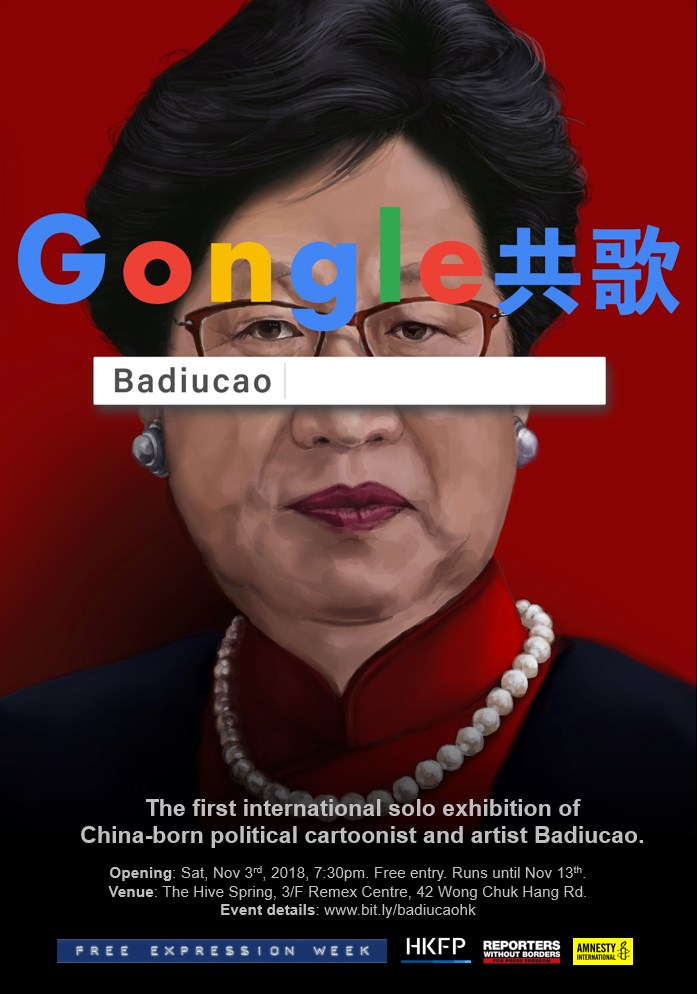 “Gongle”, by Badiucao. Used with permission.

Hong Kongers enjoy more freedoms than their counterparts in mainland China under a principle known as “One Country, Two Systems.” This autonomy is enshrined in Hong Kong's governing doctrine, known as the Basic Law, which went into force in 1997 when the United Kingdom handed the former colony over to China.

But in recent years, Beijing has more forcefully asserted its influence over Hong Kong. Hong Kongers who support more democratic rights, such as genuine universal suffrage, or outright independence have faced fierce repression. The so-called “Umbrella Movement” protests of 2014 saw thousands of Hong Kong citizens take to the streets to demand full voting rights, only to be disbanded by authorities.

On July 1 2017, President Xi Jinping declared a “red line” barring all suggestions of independence for Hong Kong on the ceremony of the 20th anniversary of Hong Kong’s 1997 return to China. Since then the “red line” has been extending to suggestions of self-determination and apparently even the hosting of a talk about Hong Kong independence, as in the case of Andy Chan.

Free Expression Week will launch with the first international solo exhibition of China-born political cartoonist and artist Badiucao on November 3. Badiucao has built his reputation on Twitter, drawing political cartoons that challenge censorship and dictatorship in China. His work has been featured by The New York Times and The Guardian.

As described by the official press release of the event:

The title of his first solo is “Gongle 共歌” — a dark comic reference for Hong Kong, China and the world.

The word “Gongle” is a play on words, commenting on Google’s effort to re-enter China with a censored search engine. The word Gongle sounds like “共” in Chinese – the short term for the Communist Party – “共产党.”

Google’s Chinese name – “谷歌” – is altered to “共歌.” The character “歌” means “singing” or “song.” Thus, “共歌” literally means “communist songs” or “singing for communism”, though it can also mean “singing together” – a metaphor for free expression.

Below is a selection of Badiucao's works to be exhibited in Hong Kong: 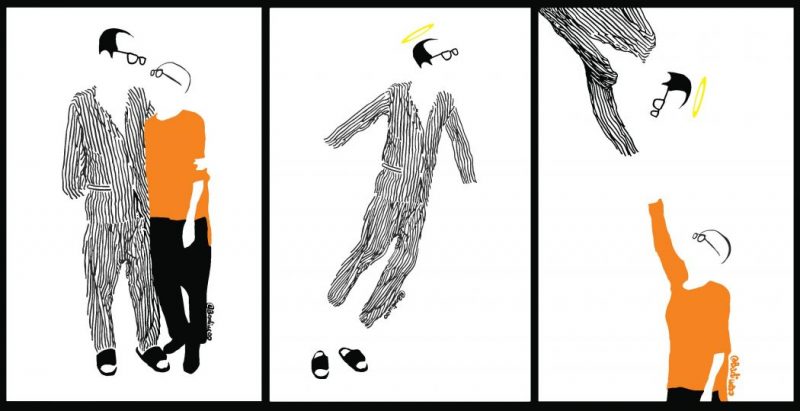 A political cartoon about the death of Nobel Peace Prize laureate Liu Xiaobo and his wife Liu Xia. Used with permission.

Chinese democracy advocate and literary critic Liu Xiaobo was sentenced to 11 years in prison in 2009 for “inciting subversion of state power” for his involvement in Charter 08, a manifesto that called for democratic reforms in China. He won the Nobel Peace Prize in 2010 for his human rights work. He died of liver failure in 2017. 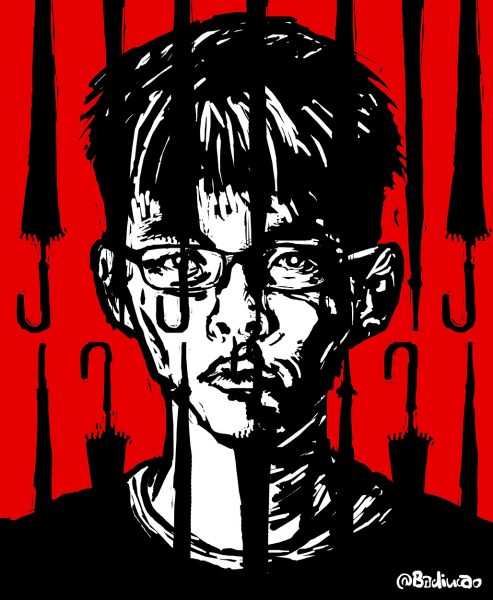 Joshua Wong, one of the major student activists leading the Umbrella protests in 2014. Use with permission.

Joshua Wong played a central role in the 2014 pro-democracy “Umbrella Movement” protests. Wong has since been convicted of unlawful assembly and ultimately sentenced to six months behind bars. He has also been the subject of targeted surveillance. 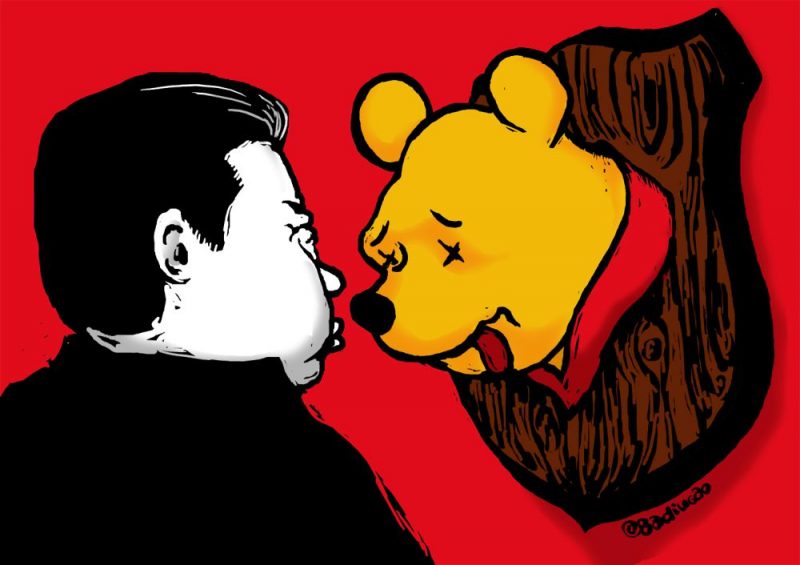 Political satire about the censorship of Winnie the Pooh in China. Used with permission.

Chinese president Xi Jinping is often compared to Winne the Pooh because of his apparent resemblance to the tubby cartoon bear. In August, the new Winnie the Pooh movie, Christopher Robin, was banned from Chinese cinemas.

In addition to Badiucao’s exhibition, Free Expression Week also will include screenings of two documentaries, Umbrella Diaries: the First Umbrella directed by James Leong and Last Exit to Kai Tak directed by Matthew Torne, as well as a panel discussion on the speech and press freedom environment in Hong Kong since 2014.

Below are the trailers of the two documentaries:

The Umbrella Diaries is a chronology of the 2014 pro-democracy protests with an attempt to trace its origins and explain why so many people were willing to take risk and join the massive sit-in through the eyes of the activists and ordinary Hong Kong citizens.

Both films shed light on a generation of Umbrella Movement activists who have been advocating for the rights of Hong Kong people to determine their future. While some of the activists have left the democratic movement, some continue to work in grassroots organizations and participate in elections and have become targets for political repression.

In 2016, six newly elected law makers, majority of them are Umbrella activists who advocate for either Hong Kong independence or self-determination, were disqualified for expressing their political stand during the oath-taking ceremonies.