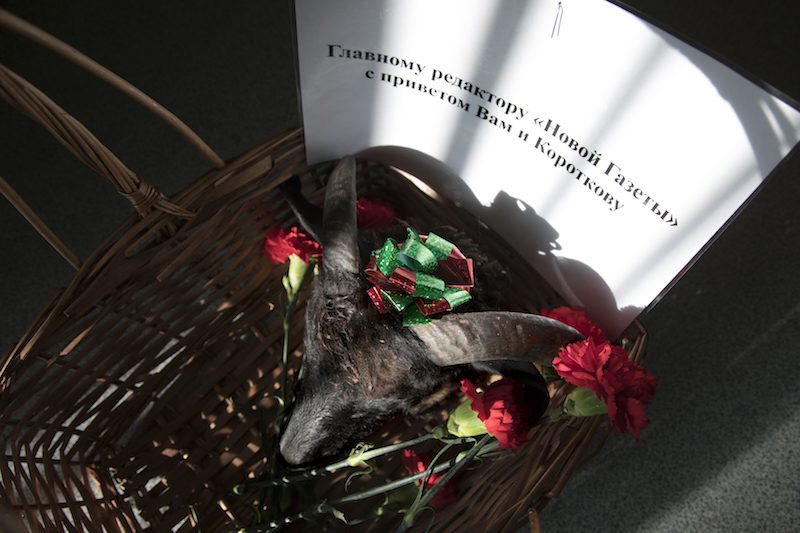 A severed ram's head on the doorstep of Novaya Gazeta newspaper in Moscow. The note reads “With best regards to Novaya Gazeta's editor in chief and [Denis] Korotkov.” Photo by Anna Artemyeva/Novaya Gazeta, used with permission.

These grisly deliveries appeared at the doorstep of Novaya Gazeta, an independent media outlet based in Moscow, in a clear attempt to threaten — and silence — investigative reporters at the newspaper.

On October 17, staff found a funeral wreath and a written warning to one of its reporters, Denis Korotkov. A message attached to the wreath called Korotkov “a traitor to his motherland.” Later that day, a courier personally delivered to Korotkov another bouquet of four carnations with a mourning ribbon and a message: “We won’t forget you.”

The next day, a severed ram’s head in a basket with six red carnations appeared at Novaya Gazeta's doorstep. These flowers are traditionally laid on a fresh grave in even numbers in Russia and some ex-Soviet countries. The basket also contained an ominous message to Korotkov and Novaya Gazeta’s editor-in-chief, wishing them “best regards”.

There is no surefire evidence of who is behind these deliveries, but a series of eerily similar messages have been directed at Korotkov from media outfits associated with the Kremlin and with Yevgeny Prigozhin, a close associate of Vladimir Putin. Progizhin was one of the 13 Russians indicted by Robert Mueller in the ongoing investigation of Russian interference in the 2016 US elections.

In a published response to the threats, Novaya Gazeta wrote:

On October 15 several articles appeared on websites, including RIA FAN, which are connected to Prigozhin. In these articles Korotkov is labeled a “traitor”, a “betrayer of the motherland” and “accomplice to the terrorists,” while social media are awash with identical messages denouncing Korotkov. These users’ profiles are similar to those of bots.

Prior to joining Novaya Gazeta, Korotkov worked for Fontanka, an independent news website in St. Petersburg where he broke multiple stories about a secretive private military company dubbed the “Wagner Group” that has bolstered Russian military involvement in the Syrian civil war. Fontanka and other media have published evidence that Prigozhin is the chief sponsor of the Wagner Group.

In 2017, after Korotkov wrote a piece detailing Wagner’s losses in Syria, he began getting threats from various sources that ultimately forced him to leave his home. Russian police have thus far failed to investigate the threats.

In Russia, Prigozhin is infamous for allegedly sponsoring the St. Petersburg Internet Research Agency which had been exposed by Russian journalists for running influence operations on Russian social media long before it made the international headlines for its involvement in the 2016 US elections. In 2017 it attempted to rebrand itself as a legitimate media empire which includes several news websites with government-issued broadcasting licenses.

After the ram's head appeared on their doorstep, Novaya Gazeta’s staff tweeted an appeal to Russian interior ministry and attorney general’s office, demanding that they investigate the threats:

“Well-wishers” have been sending threats to @novaya_gazeta’s reporters for two days in a row. @mvd_official, @genproc, we demand to investigate these threats and prosecute the perpetrators.

Later, Novaya Gazeta published a statement on its website, saying that they were “sorry for the animal’s fate” and warning against the “atmosphere of hate”:

Slander is a dangerous weapon in our times. Libel and false accusations lead to wars, assassinations and attacks on civic activists and journalists.
The people who are waging this campaign on social media against Novaya Gazeta and its reporters are well aware of the impact their letters are having in the atmosphere of hysteria and hate, which has been running amok in Russia.

Novaya’s statement also refuted the allegations of endangering the lives of Russian servicemen, saying that they have never published anything to that effect, in the newspaper or on the website.

Novaya Gazeta made international headlines when reporter Anna Politkovskaya was murdered in 2006. Founded in 1993, the newspaper has had more reporters assassinated on the job than any other media outlet in Russia.