Al-Ghomgham was arrested in 2015 along with her husband, activist Mousa Al-Hashim, over their roles in anti-government protests in Al-Qatif back in 2011, when pro-democracy protests spread across the Middle East and North Africa. 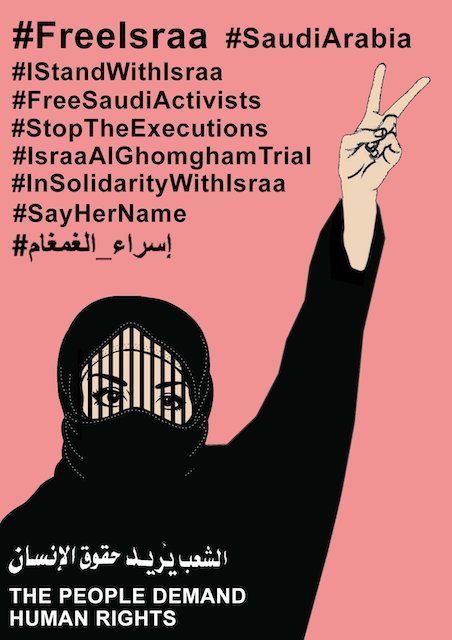 Al-Qatif is located in the Eastern Province, where most of the country’s Shiite minority — who make up 10 to 15 percent of the population live. Shiite Muslims in the Sunni-dominated kingdom face ”pervasive discrimination”, including unfair treatment under the justice system, government interference with their religious practices, exclusion from public sector jobs, in addition to stigma and sectarian speech, according to Human Rights Watch.

Alongside many other Saudi Shiites, Al-Ghomgham and her husband were protesting these injustices and demanding that the Saudi government uphold their human rights.

Al-Ghomgham faces eight charges including “preparing, sending and storing material that would harm the public order” under Article 6 of the Cybercrime Act of 2007. She also stands accused of “inciting rallies and young people against the state and security forces on social networking sites”, and posting photos and video of these protests online. State prosecutors for her case are seeking the death penalty.

She was put on trial in early August 2018 before the counter-terrorism court, the Specialised Criminal Court (SCC). A second hearing took place on October 28, but neither her nor the other defendants in the case were brought to court, the Gulf Center for Human Rights reported. The next hearing is scheduled for November 21.

Today #IsraaAlGhomgham second court hearing did take place, but neither Israa nor the other activists being trialled alongside her were present.

In addition to Al-Ghomgham, five more individuals are standing trial before the SCC this week for charges related to exercising their peaceful rights to freedom of expression, association and assembly, according to Amnesty International. The human rights organisation documented eight cases where activists are facing the death penalty:

The Public Prosecution’s recurring calls to resort to the death penalty in the past three months for at least eight individuals raises the alarm about the fate of dozens of activists who are currently detained without charge or trial and for those currently on trial before the SCC.

Among those who stood trial this week was religious cleric Salman al-Awda. State security officials arrested him in September 2017 and charged him with a litany of offenses, including calling for reforms and regime change in the Arab region. He also faces the death penalty.

Meanwhile, Saudi Arabia's attorney general Saud al-Mujib arrived in Turkey on Monday, October 29, to join an investigation into the murder of journalist Jamal Khashoggi in the Saudi consulate in Istanbul. Al-Mujib has often been sent after political rivals of the monarchy, and those who challenge the kingdom's de facto ruler, Crown Prince Mohammed Bin Salman. Leaders around the world have pointed at Bin Salman, accusing him of playing a role in the journalist's murder.

Many are wondering how Bin Salman can endeavor to bring justice to Jamal while at the same time seeking the death penalty against those practicing their rights to freedom of expression.