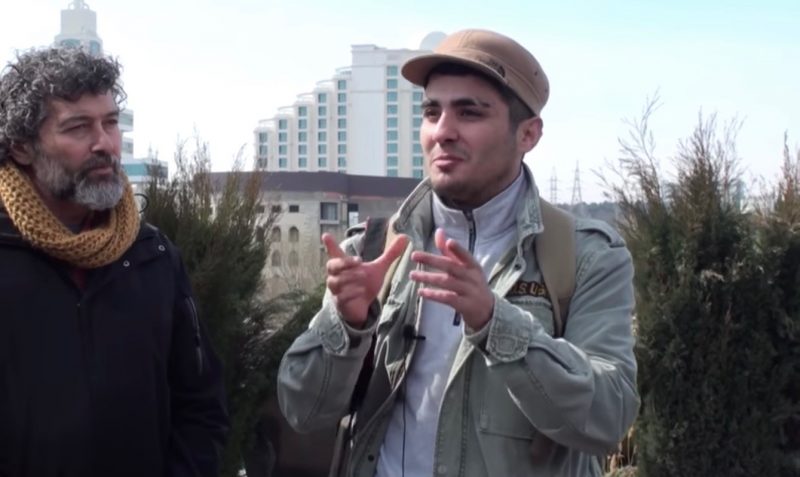 On December 26, imprisoned blogger Mehman Huseynov began a hunger strike in protest of what he says is the latest in a series of bogus charges levied against him by authorities in Azerbaijan.

After 12 days without food or water, Huseynov is now facing severe stomach pain and other health complications. His lawyer, Shahla Humbatova, visited him in prison on January 7 and reported that his physical condition had deteriorated rapidly. Prison guards had to physically hold him up when accompanying him to meet with Humbatova. On January 8, his brother Emin Huseynov reported that he had begun drinking water and milk, but continues to refuse solid and other foods.

Prior to his arrest, Huseynov was an administrator of a popular Facebook page where he shared videos on social issues in Azerbaijan, ranging from poor working conditions to the lavish lifestyles of government officials and their ownership of real estate. His page had more than 300,000 followers.

Huseynov was serving a two-year sentence on defamation charges related to his Facebook page. While in prison, he had an encounter with a prison guard that resulted in a new charge of “resisting a representative of the authorities with the use of violence dangerous to his health and life,” that could carry an additional sentence of up to seven years in prison.

Immediately after the new charges were levied by the Penitentiary Services last month, Huseynov was placed in solitary confinement.

A rally and a rap to #FreeMehman

Young, popular and politicized, Huseynov is precisely the type of figure Azerbaijan's government has targeted repeatedly in its multi-year crackdown on civil society, media and political opposition. The response among local activists to the charges against him has been overwhelming.

On social media, supporters repeatedly shared the blogger's own words:

“I shall prevent other [bad] things from happening with my death”. These are the words of political prisoner Mehman Huseynov, who has been on hunger strike for 11 days protesting new bogus charges against him, which would extend his arrest by 7 years.#freeMehman #FreePress pic.twitter.com/A0caby1XcA

A rare rally in the capital Baku held in response to the new charges against Huseynov was dispersed violently by police and resulted in several administrative detentions on January 4. The popular youth movement N!DA launched a campaign #FreeMehman calling for his immediate release on the same day.

Supporters have flooded the social media accounts of the ruling President Ilham Aliyev and the first lady Mehriban Aliyeva for good measure.

Your crown is our crown, your sister is our sister
We know all of your family, that is our duty
Your nose is our nose, YAP [the ruling party] is our only path
Our money is your money, and these people are your slaves.

Allow me to interrupt you sweet dreams
You are the creators of your own fears
But that's not the most frightening
So I ask you one last time as a human being
Push back your army of dogs!

Huseynov has been joined on hunger strike by his father Rafig Huseynov, former political prisoner Tofig Yaqublu, Tofig Mammadov, who is a member of the Popular Front Party, and Elshan Hasanov, the head of the monitoring center for political prisoners.

#MehmanHuseynov‘s father decided to join the hunger strike to protest his son's treatment by the authorities. It is time for the #azerbaijani authorities to be held accountable for their actions. Stop the injustice against the free media! #FreeMehman pic.twitter.com/qR6kUOKJKc

On January 6, the opposition Musavat party announced that it would stage a political rally in support of Mehman and other political prisoners on January 12.

Very concern about the safety of imprisoned blogger #MehmanHuseynov in Azerbaijan and ask for immediately release and drop of new trumped up charges #@presidentaz #FreeMehman #irfs.org pic.twitter.com/Hl617wRDZz

He faces new trumped-up charges and he has been placed in isolation https://t.co/iVHB1fY7m1 Lift these charges, #FreeMehman NOW! pic.twitter.com/BFqKgBpPzc

Azerbaijan: co-rapporteurs of the Parliamentary Assembly of the Council of Europe (PACE) call upon authorities to review Blogger @Mehman_Huseynov’s case#freemehman https://t.co/NnYYmNSNDA pic.twitter.com/9Y6Sda1Znk

So far, there has been no official response to such demands by authorities, who kept themselves busy last month turning the screws on other dissenting voices.

Just three days before the prosecutor announced new charges against Huseynov, another prominent journalist and anti-corruption figure, Khadija Ismayilova, was ordered by the Baku Economic and Administrative Court to pay 23,000 Euros (US$26,240) for allegedly failing to pay taxes while working as the local bureau chief for Radio Free Europe. Her personal bank account was frozen the next day.

In another instance, news website editor Anar Mammadov is facing a possible eight-year jail term for allegedly calling to overthrow the government, abuse of authority and spreading misinformation. In a trial that began on December 28, authorities zeroed in on Mammadov's website, criminalaz.com, where he reported on a July 2018 incident in which the mayor of Azerbaijan's second largest city, Ganja, was shot and wounded. Following critical coverage of the incident, the criminalaz.com website was blocked, along with several other independent news sites that reported on the incident.

As for Huseynov, the future remains uncertain. While he was scheduled to be released in March, after serving his original sentence, authorities have yet to announce whether and when he will face a new trial for the charges most recently levied against him.