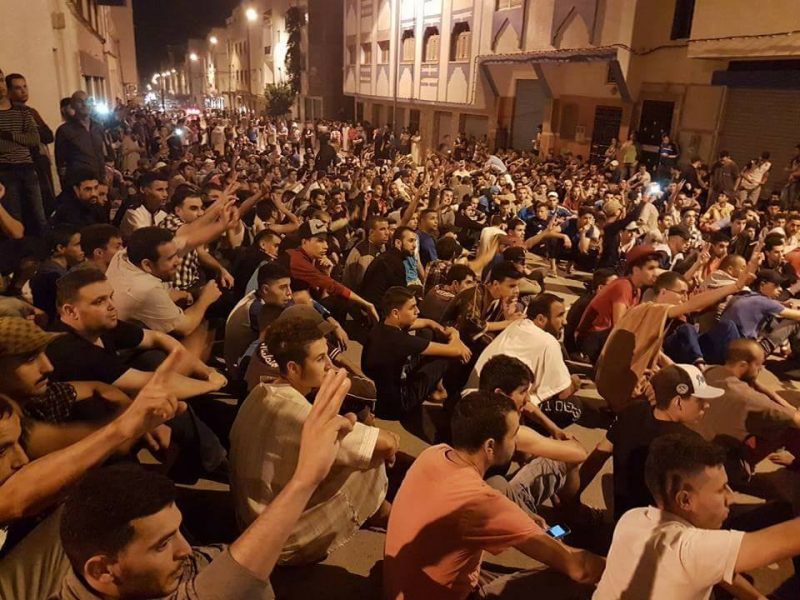 Protesters at a sit-in in Imzouren, 14km from the city of Al-Hoceima in the Rif region. Photo by AlhoceimasOfficiel. Used with permission.

This story is the first in a two-part series on media repression and “fake news” in Morocco. It was written in collaboration with Access Now.

In September 2018, Nasser Zefzafi, imprisoned leader of Morocco’s Hirak protest movement in the Rif region, was nominated for the European Parliament’s prestigious Sakharov Prize For Freedom of Thought. The annual award was established in 1988 to honor ‘’individuals who have made an exceptional contribution to the fight for human rights across the globe.’’

Zefazfi is currently serving a 20-year prison term for his role as a leader in the Hirak protests. The protest movement first took hold after the death of Mohsin Fekri, a fish vendor whose product was seized by authorities in the city of Al Hoceima on October 29, 2016. When Fekri tried to reclaim the fish, he was crushed to death by a garbage truck.

Zefzafi made it to the list of three finalists for the Sakharov Prize, but did not win. It was instead awarded to Ukrainian film director and writer Oleg Sentsov.

Following the announcement of the winner on 25 October, Moroccan news site Cawalisse published a fabricated story alleging that the European Parliament “withdrew Zefzafi’s name from the list of winners’’ because he is a “criminal who has no link to human rights.” 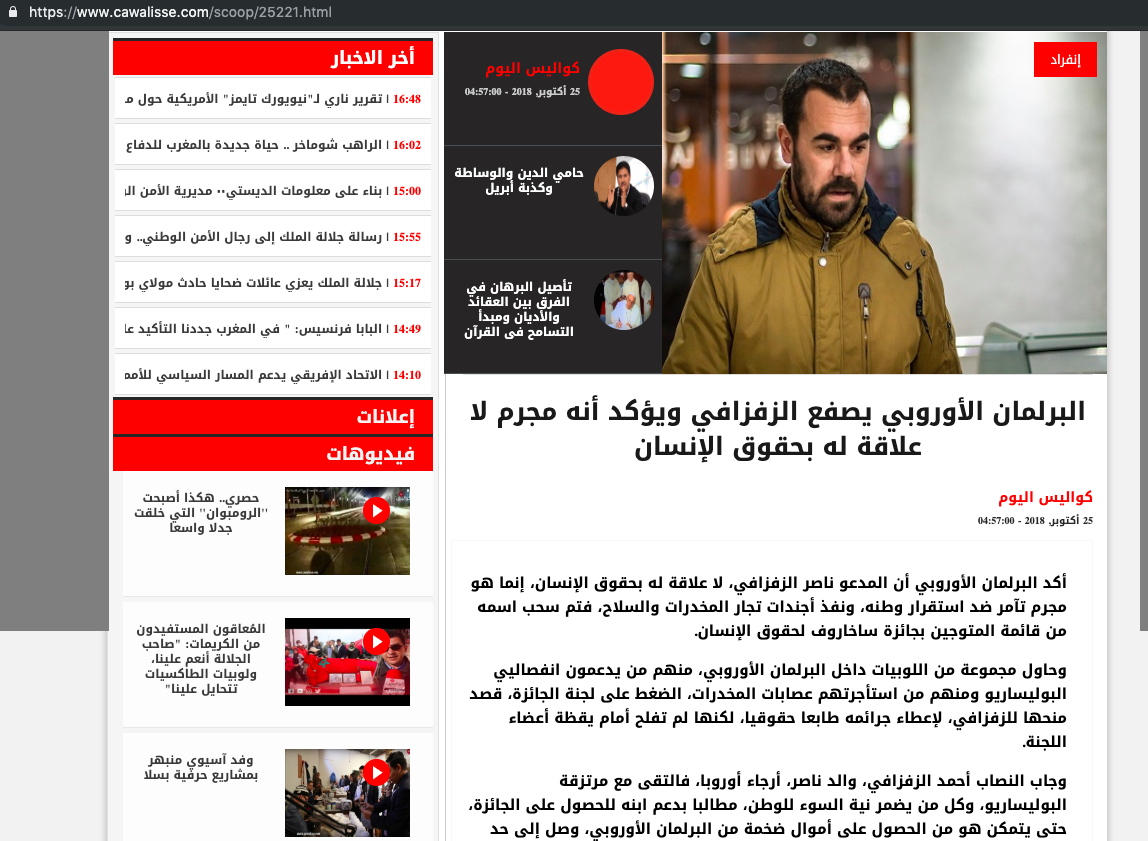 Screenshot of the fabricated Cawalisse story alleging that the European Parliament deemed Zefzafi  a ”criminal’.

The article (which does not list an author) states that “a group of lobbies from within the European Parliament, including those that support Polisario separatists and those hired by drug gangs, pressured the prize’s committee to award it to Zefzafi and give his crimes the label of protecting rights.”

The story is completely false. It is based on fabricated facts and conspiracy theories. The European Parliament never maintained that Zefzafi was a criminal, nor did they withdraw his name “from the list of winners.” He was simply not chosen to win the prize. In fact, there was no “list of winners” in the first place, but only one winner, Oleg Sentsov.

The Rif protests and the crackdown that followed

The government ignored protesters’ demands, which included an end to corruption and improved infrastructure. Protesters were instead labelled ‘’separatists’’ and were accused of being foreign agents who were attempting to destabilize Morocco. Documented attempts at censoring them included blocking internet connections during protests.

On June 26, 2018 the Casablanca Court of First Instance convicted 53 protesters, including leaders of the movement, of an array of charges including arson, rebellion, damaging public property, staging unauthorized protests, and harming the state’s internal security. They were sentenced to prison terms ranging from one to 20 years.

In August 2018, King Mohammed VI pardoned 184 Hirak activists, including 11 of those arrested in the June 2017 crackdown. The rest remain behind bars.

This is not the only story that was published by pro-government media to smear Zefzafi, nor is he the only Hirak activist to be targeted in these campaigns. As the movement grew, government-aligned media and supporters launched online smear campaigns to discredit the movement, accusing its leaders of being “traitors,” “corrupt,” or  “terrorists” as a way to deter them from carrying out their protests. The disinformation campaigns continued as the activists were thrown in jail and brought to trial.

Nawal Benaissa, another leader of the Hirak movement, was prosecuted and sentenced to 10 months in jail over comments she posted on her Facebook account between June and August 2017, in which she called on residents of Al Hoceima to join protests. As soon as she joined the movement, fake stories started to appear on local media and social media claiming that she is “an agent who works for embassies” and that she was receiving funds from foreign countries to spread violence and destabilize the region.

A Moroccan journalist who chose to remain anonymous for safety reasons, told Access Now that Moroccan authorities’ use of defamation campaigns to pressure and discredit opponents and independent activists started in 2011 during the Arab uprisings.

“Facts and events may be created as part of a set-up, or in some cases, the facts may be real, but deeply altered and presented with the intent to discredit the target,” he said.

He further explained that the recurring themes in these false stories seeking to “defame organizations and individuals who are not loyal to the existing political system” include sex and morality, and receiving compensation to serve foreign interests. Several fake stories by pro-government media claimed that Zefzafi and his father were receiving funds to destabilize the Rif region and Morocco.

The targeted harassment of the Hirak activists is yet further evidence that while the internet can provide a platform for the marginalized, it can also facilitate their victimization. The potential cost of this rapid spread of disinformation is painfully demonstrated in the silencing of the Hirak activists and the decline of their movement which only fought for basic rights.