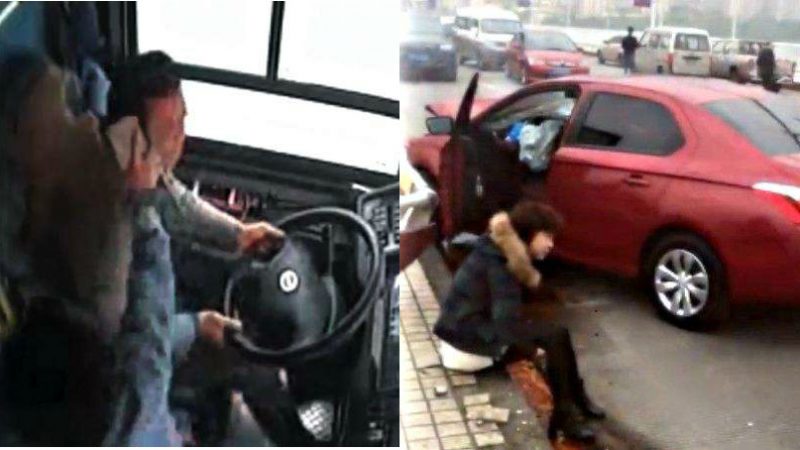 Two drivers from the Chongqing bus accident. Image from Weibo.

The Chinese government has long justified its censorship practices as necessary for keeping fake news and online rumors out of circulation, both in traditional and online media. But a 2018 bus accident in Chongqing marked one of few news events where government censors found themselves censoring news coverage by state-affiliated media outlets.

The bus accident took place in the Wanzhou District of Chongqing on 28 October 2018. On a two-way bridge, the vehicle swerved into oncoming traffic, collided with another car and then flew off the bridge, plunging into the Yangtze river. All told, 15 people were killed as a result of the accident.

State-affiliated newspaper Beijing News was the first media outlet to report the news on Weibo, with a story suggesting that the accident was caused by an oncoming car. The report emphasized the fact that the driver of the car was female, and alleged that she had been driving on the wrong side of the road.

Later, Xinhua news agency quoted the Beijing News story and the news was published on major news sites and media outlets. For example, Global Times's headline was “The cause of bus plunge accident: a female driver drove in the wrong direction”. 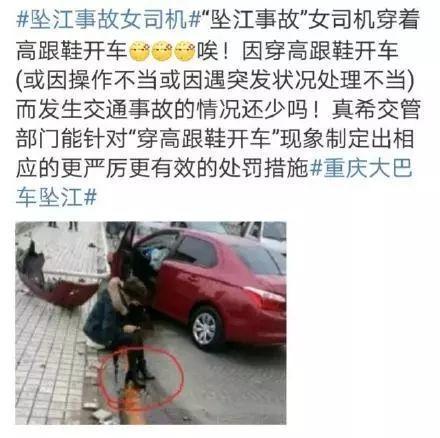 Netizens blamed a female driver for the bus accident, attributing it to her wearing high heels. (viral screen capture image from Weibo)

The news went viral online, with a majority of netizens praying for the accident victims. A few made comments reflecting gender stereotypes, criticizing the female driver. Then on Weibo, a user posted an original photo from the scene of the accident, showing the driver, who incurred only minor injuries, had been wearing high heels. The photo went viral immediately, eliciting comments including “she deserves to die” and “murderer”.

A few hours later, Wanzhou District police reported that it was the bus driver, not the woman in the car, who had veered into oncoming traffic. The female driver had done nothing wrong.

The police clarification also went viral and public opinion reversed. Some criticized the original reports for misleading the public. But the media outlets involved simply removed their stories in silence, without making any public apology. Notably, Beijing News ran another report “Attacking the female driver was straying from the point”, as if it had played no role in misleading the public.

Five days later, surveillance footage taken from the bus again went viral online. It revealed that five minutes before the crash, a passenger had had a quarrel with the driver. The quarrel then escalated into a physical fight and the driver lost control of the vehicle.

As predicted, the footage caused another uproar online and attracted a huge number of comments. Many people saw the escalation of tension as an allegory of China's political turn in recent years.

The Wechatscope database revealed that some official outlets removed the misleading news stories on WeChat soon after Wanzhou District police released the details of the bus accident. For example, Legal Daily published a post with the headline: “Chongqing bus plunged into the river to avoid crashing with the female driver who had taken the wrong lane. The bus has sunk 65 meters and is now at the bottom of the river. Two bodies have been found” (重庆公交车为躲避逆行女司机撞破护栏坠江 沉入65米深江底 已打捞出两具遗体). The post was published on 28 October 28 and then deleted just two days later, on 30 October.

With this and other stories, the removals were not enforced by an outside authority. Instead, media outlets themselves were self-censoring (or self-regulating) their own misinformed news content. The content removal notices issued by WeChat indicated that these posts were taken down by their own publishers.

At the time of this story's writing, similar headlines about women driving in the wrong lane had been removed from all official news outlets and could not be found in search results.

At a later stage, after the surveillance footage had been released, censorship authorities stepped in and labelled reflective and critical commentaries as “illegal”. The WeChatscope data set offers a glimpse at what authorities deemed to be “illegal” content — this proves that authorities’ interventions were not intended to stop the circulation of fake news or misinformation, but rather of opinions and views.

Below are three posts that circulated widely on the WeChat public domain, but were then deleted quickly.

This post was published and deleted on November 4. It was labelled as illegal content according to WeChat's take down notice. The writer quoted social media discussions and used these to build an allegory, comparing the bus accident with China's trajectory in recent years. One line of the piece read:

Don’t attack the person who is in charge, or else he makes a sudden left turn, everyone in the vehicle will be doomed.

The post was published on November 3 and deleted on November 6. It was also labelled as illegal content. The writer criticized onlookers who have witnessed wrongdoings but chosen to remain silent, warning that when people tolerate barbaric behavior, all of society suffers.

Published on November 5 and deleted on November 7, this story also was labelled as illegal content. The post interprets the incident as a typical tragedy of an era in which good people cannot speak up and act out, lest they be buried alive with evil people.

In each of the above examples, we see that the censorship authorities were forced to step in and label related content as “illegal” only when interpretations of the news story had the potential to challenge the political status quo.

This case study shows that the spread of factually inaccurate information in mainland China could be dramatically reduced if state-run media conducted more self-regulation and employed higher reporting standards. And the second set of examples shows that in censorship authorities’ crackdown on rumors, the real target is independent political views.