The massacre is the most censored topic online in China. 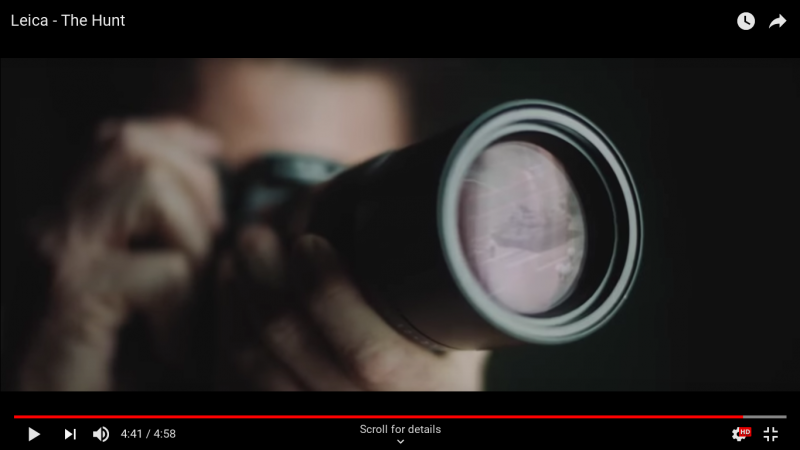 A new video promoting the German camera company Leica has caused an uproar on the Chinese internet, resulting in a ban on the video and its derivatives.

Produced by Leica’s ad agency F/Nazca Saatchi & Saatchi, five-minute video was launched in Brazil on April 16 to celebrate 100 years of the brand.

The video, titled “The Hunt”, features a collage of photographers documenting violence and hardship in different parts of the world. It is book-ended with scenes from inside a Beijing hotel in 1989, where a photographer is harassed by Chinese military officers but then left alone. Gunfire can be heard in the background as the photographer walks to the window, and raises his camera. Reflected in the lens, we see the infamous image of military tanks moving through Tiananmen Square towards a single protester standing before them.

Viewers familiar with this history will know the reference to the infamous “Tank Man” photo, originally shot by Jeff Widener at Tiananmen Square on June 4, 1989. On that day, the Chinese military carried out a brutal crackdown on student-led demonstrations calling for democratic reforms. At the time, the Chinese Red Cross estimated that 2,700 civilians were killed, but more recent estimates from US and UK government agencies put the number above 10,000.

Researchers at the University of Hong Kong have shown that the Tiananmen Square massacre, often referred to simply as “June 4″, is the most heavily censored topic on the Chinese internet.

Reacting to the video, some social media users said it was “insulting China”, while others began questioning the business partnership between Leica and Huawei, China’s largest mobile phone manufacturer and 5G network developer. Huawei has been promoting Leica’s lenses in some of their phones.

Though the video was not targeted at a Chinese audience, it swiftly circulated on Chinese social media and went viral overnight.

Chinese censors reacted quickly and issued the following instruction, which were leaked on April 18 (via China Digital Times):

As quickly as possible, all video websites find and delete video and images from the Leica advertisement. (April 18, 2019)

For the next few days, users were forbidden from writing the words “Leica” in English and “徕卡” in Chinese on Weibo.

Twitter user @woilgoo posted a screenshot of the censorship notice that users received when trying to publish these words on Weibo. The notice cites “a violation of relevant laws and regulations or the Weibo Community Convention”.

Nevertheless, conversations about the video continue to emerge on Weibo. Users who are active on mainland Chinese platforms and Twitter have been documenting some of the conversations on Twitter, which is blocked in China, but still accessible via VPN.

Although #TheHunt video cannot be found on #Leica’s Weibo account, Chinese social media users still managed to comment on an earlier post, subtly referring to the controversial ad and expressing appreciation and surprise that the account is still up and running #徕卡 pic.twitter.com/El2nE6nPmt

After the censorship machine stepped in, the incident cooled off quickly and all traces of the video were removed from major Chinese social media platforms.

Now, social media users can publish posts about Leica, so long as the term is not connected to other sensitive content.

Outside China, the video continues to circulate. On Facebook, many overseas Chinese users shared the video to commemorate the 30th anniversary of the June 4 massacre. On YouTube, the majority of the feedback has been very positive:

Good job Leica. Salute to all the brave journalists in the world!
You earned my respect Leica, dare to tell the truth…but may god bless your business at mainland China…
a great video, why people of china dislike it who knows… Maybe they cant face the truth of about there [sic] government …