The law allows government ministers to decide what is "false". 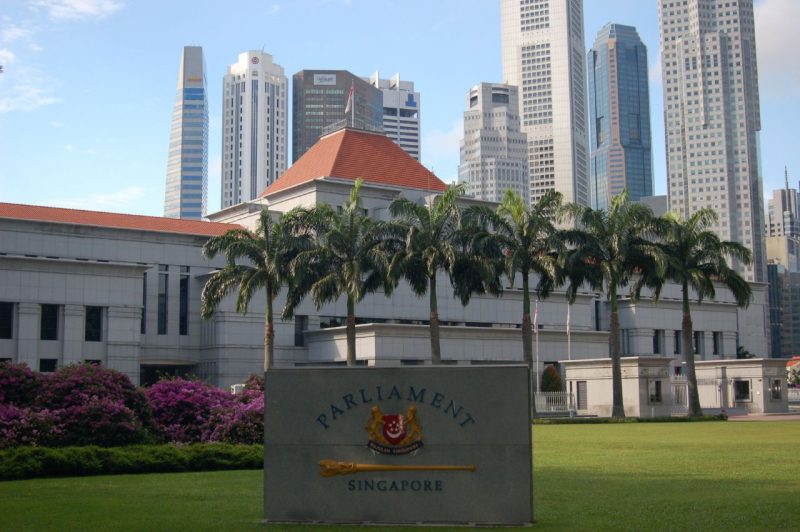 Singapore parliament passed the Protection from Online Falsehoods and Manipulation Act on May 8, 2019 amid concern that it contains provisions undermining free speech. Photo by Flickr user Teddy Sipaseuth (CC BY-SA 2.0)

Singapore’s parliament approved the Protection from Online Falsehoods and Manipulation Act (POFMA) on May 8, 2019.

Commonly known as the anti-fake news law, POFMA gives broad, unchecked powers to government ministers to determine what online information is “false” and demand that it be censored or corrected.

The Ministry of Law says the legislation will help stop the circulation of “deliberate online falsehoods” which it says are being used “to divide society, spread hate, and weaken democratic institutions.”

But media groups and human rights advocates see the law as another tool to suppress free speech in Singapore. The law will come into force in a national environment where free speech is already under threat, as seen in multiple recent defamation claims against independent media and commentators.

The proposal to make a law aimed at tackling false information was discussed during a parliamentary committee deliberation in 2018. POFMA was introduced in parliament on April 1, 2019. A total of 72 members of parliament voted in favor of the measure while nine opposed it.

Under the law, any government minister can compel website administrators, internet service providers, and even private chat groups to immediately correct or remove ‘fake news’ from their domains. But the law's definition of what counts as fake or false is remarkably vague.

Article 2 states that “a statement may be found to be false if it is false or misleading, whether wholly or in part, and whether on its own or in the context in which it appears.”

Worker’s Party Non-Constituency MP Leon Perera identified three other provisions of the law which could be used to curtail the right to freedom of expression:

Section 2 – defining what a Minister deems a misleading presentation of facts, not only false claims of fact, as correctable;

Section 4(f) defining harmful falsehoods as including those that diminish confidence in the government; and

Section 6, which establishes Ministers as the decision-makers of truth and falsehood in the first instance.

In a press release, the Ministry of Law clarified that the law does not cover opinions, criticisms, satire or parody. It insisted that corrections are not criminal sanctions, and that “only those who act to deliberately undermine society using falsehoods will be subject to the criminal offences.”

The Ministry also emphasized that the law “will not affect most average citizens,” and that it is a vital piece of legislation, reasoning:

It will help ensure online falsehoods do not drown out authentic speech and ideas, and undermine democratic processes and society. The aim is to keep in place the conditions for Singaporeans, as individuals and civic society, to build a healthy and robust public discourse, informed by the facts.

Law and Home Affairs Minister K Shanmugam reiterated during the parliamentary deliberations that the law will only affect “falsehood, bots, trolls and fake accounts” and not free speech. He also argued that corrections ordered by a government minister contribute to transparency:

You put up an article, Government says this is not correct. You carry a correction (and) let your readers judge. What’s the problem? More transparency, the better.

In a letter sent to Singapore’s prime minister, UN special rapporteur on the promotion and protection of the right to freedom of opinion and expression David Kaye expressed his concern about some provisions in the measure.

…the Bill confers on select executive officials excessive authority to restrict, censor and punish online expression it designates as “false,” with limited opportunity for appeal.

…I am concerned that this overbroad definition of falsehood will lead to the criminalization and suppression of a wide range of expressive conduct, including criticism of the government, and the expression of unpopular, controversial or minority opinions.

Several journalists signed a joint statement detailing their apprehensions about the law:

By failing to distinguish between a malicious falsehood and a genuine mistake, the proposed legislation places an unnecessarily onerous burden on even journalists acting in good faith. Such a law will hinder rather than encourage the free flow of accurate information. News organisations might feel compelled to withhold important stories simply because certain facts cannot be fully ascertained.

Southeast Asian Press Alliance warned about how POFMA could further restrict press freedom in the country:

This bill clearly demonstrates that the government is setting itself up as the arbiter of truth and falsehood – a manifestly dangerous proposition, especially for a society that is already reeling from a raft of repressive laws.

Singapore-based journalist Kirsten Han, who is also a Global Voices contributor, added that POFMA might be another tool of the dominant People's Action Party (PAP) to silence government critics:

POFMA is thus likely to be yet another weapon in the PAP government’s arsenal against its critics…the legislation is worded broadly enough to give government ministers the option of wielding it selectively against particular targets.

PAP, the ruling party, has been in power in Singapore since the late 1950s.

Tech companies Facebook and Google also are worried about the implications of the new law. Google said the law could “hurt innovation and the growth of the digital information ecosystem” in Singapore and the southeast Asian region.

Jeff Paine of the Asia Internet Coalition said that the restrictive provisions of POFMA could be used as a model in other countries:

As the most far-reaching legislation of its kind to date, this level of overreach poses significant risks to freedom of expression and speech, and could have severe ramifications both in Singapore and around the world.