China’s censored histories: The struggle to carry memories of the Tiananmen Massacre into the future

Despite pervasive censorship, there is a continued effort to remember.

To mark the 30th anniversary of the Tiananmen Square Massacre, research teams at the University of Hong Kong's Weiboscope and the University of Toronto's Citizen Lab gathered a collection of June 4 related content that is censored on social media in China. We explain our analysis of the censored contents in a series of articles published on Global Voices. The first post was published on April 17 and the second on June 27.

For thirty years the Communist Party of China and citizens have been locked in a struggle over the memory of the Tiananmen Square Massacre of June 4, 1989. Every year, around late May, the state censorship machine gears up to stop memorials of the incident from surfacing online and offline. Nevertheless, citizens continue to engage in acts of remembrance manifested in annual commemorations, historical preservations, music, and online memes. Citizen Lab and Weiboscope’s collection of censored content related to June 4 provides a view into this struggle.

Books and documentaries that document and analyze the history and outcomes of the Tiananmen student democracy movement are heavily censored on social media in China. Censored content includes references to The Gate of Heavenly Peace, a book by historian Jonathan D. Spence on Chinese revolutions, and a film of the same name by American filmmaker Carma Hinton that chronicles the student protests and military crackdown.

On the Chinese microblogging social media platform Weibo, users collectively gather historical information from a grassroots perspective, including numbers of deaths and injuries, confrontations between the military and the protestors, eyewitness testimonies, and timelines of the protest movement and the ensuing massacre. Many June 4 related posts on Weibo that are censored include information on the event supported by validated sources, including journalistic coverage, video footage, photographs, books, archives, and documents. Despite the pervasive censorship, these posts signal disagreement with state propaganda aimed at covering up the facts surrounding the massacre.

Artists also used music and other forms of expression to remember June 4 over the past 30 years. Musicians from mainland China, Hong Kong, and Taiwan voiced some of the strongest support for victims of the Tiananmen Square massacre and democracy movements in China. Posts censored on Weibo between June 1st and June 4th of each year between 2012 and 2018, include album covers and photos of artists such as Beijing-based Chinese rock music pioneer Cui Jian, Hong Kong singer Anita Mui Yim-fong, and Taiwanese singer and songwriter Lo Ta-yu who all made popular songs to commemorate the event. 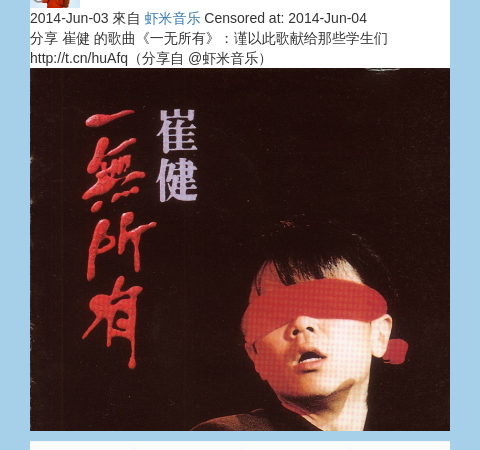 The user caption reads: “Sharing Cui Jian’s song ‘Nothing to my name’: I would like to dedicate this song to the students”. (Shared on June 3, 2014 and censored the following day.) Image from Weiboscope. 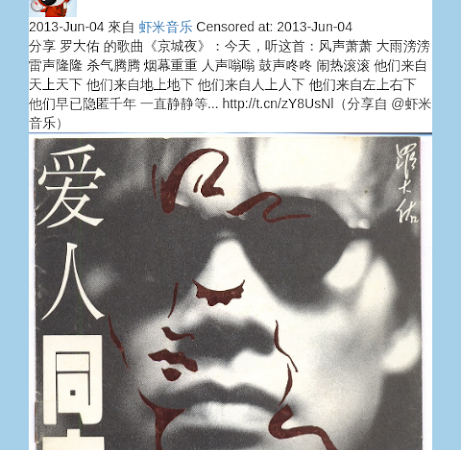 User caption reads: “Sharing Luo Ta-you’s song ‘Beijing Night’: Today, listen to this song: the wind is rustling, the rain is thundering, the thunder is murderous, the murderous smoke is heavy, the vocals, the drums, the noise, hot, hot, the singer, the singer, the singer, They come from above and below, on the ground and underground. They have been hiding for thousands of years and have been quiet”. (Shared on June 4, 2014 and censored on the same day.) Image from Weiboscope.

Keywords found to be censored on social media include references to songs like “Mother, I have done nothing wrong” (妈妈我没有做错), by Hong Kong rock and roll artist Danny Summer, and “There Should Be Love in June” (六月里应该有爱), by Chinese punk band Punkgod. Both songs were written on the occasion of the 20th anniversary of the Tiananmen Movement in 2009. Danny Summer, known in some circles as the godfather of rock and roll in Hong Kong, wrote the song to show support and sympathy for mainland students who participated in the protests in 1989. Punkgod, a band from Jiangxi in Southeast China, dedicated an entire album to commemorate the Tiananmen Movement on its 20th anniversary in 2009.

Each year, Chinese netizens attempt to dodge social media censorship by posting memes that symbolize June 4. Weibo posts collected by Weiboscope in 2012-2018 and made available to the public this year, show a range of creative ways adopted by users to outsmart Chinese censors. Much of this content make references to the tanks used by the government in the military crackdown on civilians. Posts playfully arrange cigarette packages, yellow duck toys, books, logos, and other objects to make subtle references to the iconic photo of Tank Man standing in front of a line of tanks at Tiananmen Square. Other posts share comics and artwork that generally depict tanks. 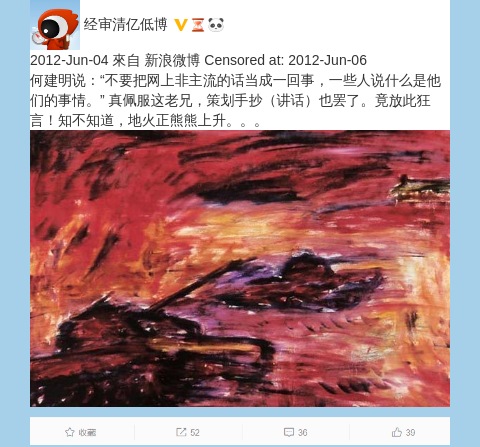 An abstract painting of a tank with a user caption that has nothing to do with the June 4 incident. (Shared on June 4, 2012 and censored on June 6, 2012.) Image from Weiboscope. 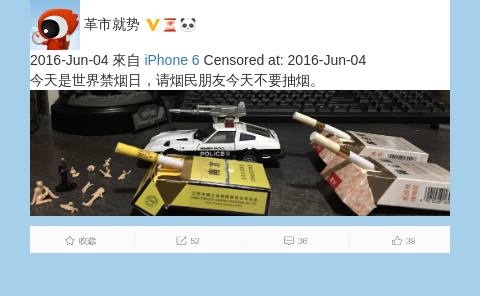 An image of cigarette packages made to look like tanks with a user caption that reads “today is the international No Smoking Day, please don't smoke”. (Shared on June 4, 2016 and censored the same day.) Image from Weiboscope.

There are also more straightforward displays of commemoration including photos showing performing artists carving the numbers six and four on a brick, and a group of poets with their faces masked while attending a small gathering at the Great Wall in Beijing in 2013.

Keyword data from Citizen Lab demonstrates how Chinese netizens use coded language to refer to June 4. Many keywords use Roman numerals and combinations of numbers to reference June 4 such as “VI IV”, “VIIIIX VI IV”, “1+3”, “32×2”. Other keywords use less obvious codes like “*(^$” a string of special characters that represents the numbers 8964 on the keyboard.

Carrying Memory into the Future

Since June 4 1989, the Chinese government has aggressively attempted to push the memory of the brutal crackdown away from the public mind through pervasive censorship. Lousia Lim, a veteran China correspondent found in a small experiment that only 15 of 100 students in China recognized the famous photo of Tank Man, and accounts from millennials in China portray a seeming indifference to government efforts to expunge the event from the collective consciousness. However, acts of memorial from tens of thousands of lit candles in Hong Kong's Victoria Park, sounds of a Cantonese pop song moving through the air, to playful images of the Tank man or simply “64” posted on Weibo show a continued effort to remember.

Note: In order to protect Weibo users’ privacy, all post accounts shown in screenshots are given pseudonyms.