Withheld in Turkey: How the government exploits removal requests to silence critical and independent voices 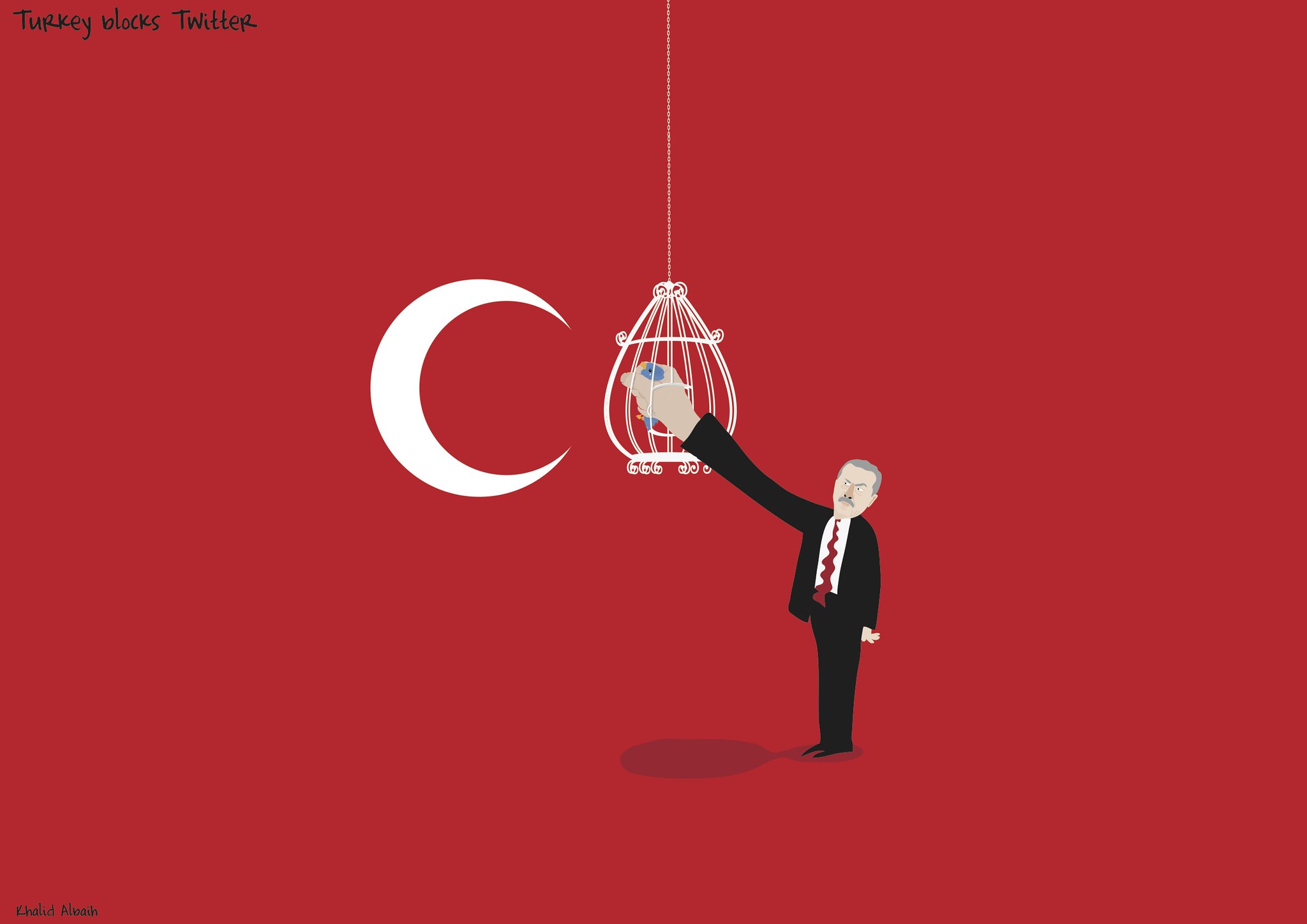 Ersoy, whose account is certified, is a lawyer and politician. In 2018 she was elected as a parliament member representing the opposition People's Democratic Party (HDP).

Grup Yorum is a veteran Turkish folk band known for their political songs since 1987. “Yorum” means “to comment” and many of the band's songs look at the problems in the country and channel criticism in lyrics of their songs. For years, their concerts have faced bans and censorship in the country. Most recently, the band's July concert was banned in the Turkish province of Hatay, and 12 people were detained for singing their songs on the day of the concert. In February 2018, six of its members were declared terrorists. Two of them fled the country for France.

The Taksim Gezi Parki account was set up at the onset of Gezi Park protests, while Gezi Savunmasi tracks court proceedings of protesters and activists arrested during the Gezi Park protests. The 2013 protests first started as an environmental protest movement against the planned demolition of Gezi Park in Istanbul, before turning into a nationwide anti-government uprising bringing together hundreds of thousands of protesters.

At the time of publication, Twitter was yet to comply with the decision, and all four accounts were still accessible in Turkey. The basis for the court's decision was the protection of national security and public order, in accordance with Law No. 5651 on the Regulation of Publications on the Internet.

These four accounts are among hundreds—if not thousands— of Twitter accounts targeted by the Turkish government using the platform’s ‘’Country Withheld Content” tool (CWC). In 2010, Twitter unveiled the tool which allows it to censor content on a country by country basis. At that time, Twitter may not have completely envisaged how its tool could be abused by a number of increasingly authoritarian countries where social media platforms have been targeted by the authorities in the face of growing crackdown and censorship, most notably Turkey.

In fact, one of the Turkish government’s tactics to silence users on the internet and deny them their rights to access and impart information, is submitting requests to Twitter and other platforms to withhold content deemed in violation of its local laws. When platforms refuse to comply, they could be blocked, a risk commercial platforms may not be willing to undertake in a market with nearly 60 million internet users.

For example, in 2013, during the popular Gezi Park protests during which protesters and activists used Twitter and other social media platforms to report on the demonstrations while traditional Turkish broadcasters didn't over it, the then-Prime Minister Recep Tayyip Erdoğan described the platform as a “scourge“.

In March 2014, the Turkish government blocked the platform for spreading audio recordings that appeared to implicate Erdoğan’s inner circle in a corruption investigation. The government said the platform did not respond to court rulings to remove some links. At a local election rally at that time, Erdoğan said that he had a court order and vowed to ‘’eradicate Twitter’’.

While the Twitter ban has since been lifted, the Turkish government has continued to exploit Twitter’s country-withheld content tool to silence users on the platform.

In 2018, Facebook restricted access to more than 2,300 items in Turkey at the request of the authorities. These restrictions took place on Facebook and Instagram and affected items like posts, comments, and accounts and media that were deemed in violation of local laws such as Law No. 5651 which ”covers a range of offenses including personal rights violations, personal privacy, defamation of Ataturk”.

Google received a total of 10,379 removal requests and 57,851 total items named for removal since 2009 over a number of violations related to national security, privacy, ”obscenity/nudity” and defamation. Between the second half of 2009 and the end of 2017, Google restricted access to 19,423 of the items on its different services including Youtube, Google Search and Blogger.

According to the most recent Twitter transparency report, covering the second half of 2018, Turkey submitted more than 5,000 requests for content removal, more than any other country. One of the most disturbing conclusions of the report is that Turkey, together with Russia, are the top two countries when it comes to the volume of global requests, leading with a total of 74 percent of the total removal requests made to Twitter.

The Turkish government is adopting the same tactic with other platforms including Facebook, Youtube, WordPress and even the free online encyclopedia Wikipedia.

In fact, access to all versions of Wikipedia has been blocked by the Turkish government since 2017 for refusing to take down entries containing accusations against the Turkish government of supporting terrorist groups in Syria. At that time, the government accused Wikipedia of ‘’running a smear campaign against Turkey’’, and blocked it using Law No. 5651 or the Internet Act of 2007.

The Turkish government repeatedly refers to domestic legislation such as Law No.5651 and others to request platforms to carry out censorship on their behalf, and to block them when they do not comply.

In fact, under Law No.5651, hosting companies are required to take down illegal or infringing content once served with a notice from the authorities. However, what counts as illegal content in Turkey includes speech that is protected under international human rights standards. For example, law No. 5651 prohibits the defamation of Mustafa Kemal Ataturk, the founder of the Turkish Republic. Article 301 of the Penal Code contains provisions prohibiting the “denigration of the Turkish nation” and state institutions such as the parliament and the government. Article 299 of the same code prohibits insults against the President.

In addition, the list of government and judicial institutions with power vested in them to request blocking through court order or directly is extensive. These include the criminal judgeships of peace who have the power to order the removal of content and the closure of websites under No. 5651 and law No. 5846 on Intellectual and Artistic Works. Other bodies such as the Information and Communication Technologies Authority (ICTA), which the telecommunications industry regulator, the Access Providers Union established in February 2014 and the Information Technologies and Communication Board can issue administrative censorship decisions under certain circumstances.

The implications of these platforms’ compliance with government requests is detrimental to freedom of expression and press freedom.

In January 2018, Buzzfeed published a story documenting Twitter accounts that were blocked in certain countries, chief among them Turkey. According to the authors, the Turkish government ”have led Twitter to block hundreds of users for what appear to be political reasons.”

According to a data set collected by Buzzfeed of more than 1,700 Twitter accounts withheld in at least one country between October 2017 and January, the Committee to Protect Journalists identified at least 59 accounts belonging to journalists and media outlets withheld in Turkey.

During the second half of 2018, Twitter identified 253 accounts of verified journalists and news outlets that were the subject of 146 legal removal demands. In response to the demands, the company said that it withheld three tweets and one account in Turkey for violating local anti-terrorism laws.

Ahmet Sabanci, a freelance journalist, told Global Voices in an interview that companies like Twitter comply with domestic court decisions because they ”[do] not want to anger the Turkish government. The same compliance goes for Russia and other countries”. Sabanci added that although an account holder can protest the decision of the platform, ”it happens so often and the chances of winning the case are so slim that people keep opening new accounts”.

Throughout the second half of 2018, Twitter filed legal objections for court orders from Turkey that specifically involved journalists or news outlets, but none of these objections prevailed. In fact, between  2014 and 2017 only 3 percent of the objections filed by Twitter were accepted by Turkish courts.

While the Buzzfeed data set offers a glimpse into the accounts impacted by the Turkish government’s use of the CWC tool, it remains unclear just how many of the withheld accounts belong to the representatives of the Turkish civil society and human rights defenders. In fact, Twitter and other platforms do not publish the list of accounts they withhold for violating local laws.

In its 2012 blog post announcing the CWC tool, Twitter said that ”one of [its] core values as a company is to defend and respect each user’s voice”. ”We try to keep content up wherever and whenever we can, and we will be transparent with users when we can’t. The Tweets must continue to flow”, the company added.

But it remains to be seen whether this statement holds true today, when countless countries, including Turkey, keep resorting to national laws to silence online critical voices inside the country on a regular basis.

”Twitter, Facebook, [and] Google…are responsible to their shareholders primarily, I don't consider them as guardians of free speech”, Efe Kerem Sözeri, a Turkish researcher based in the Netherlands, said back in 2018. ”But the imbalance in the tools they offer to users versus governments make them complicit in the authoritarian rulers’ crackdown against the opposition”, he added.

Originally intended to keep the tweets flowing, Twitter's CWC tool—and similar tools provided by other platforms— seem to have actually contributed to the silencing of critical voices in Turkey.