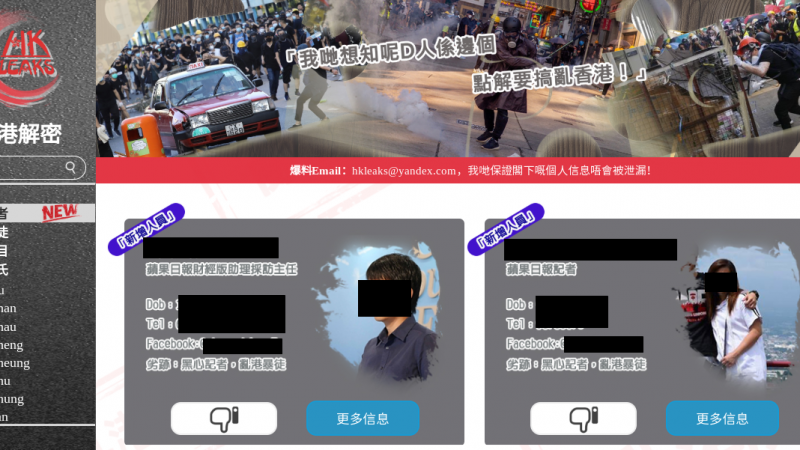 The hkleaks.ru site was set up to doxx Hong Kong protesters and reporters by publishing their personal information including photos, residential addresses, birth dates, telephone numbers and social media accounts. It also has an email for people to specifically report on Hong Kong protesters.

Doxxing is the practice of publishing someone's personal information without their permission, with the intention to threaten or intimidate. While some of this information may be readily available or easy to find such as a user's own photos posted on their public social media profiles or pages, the intention with doxxing is to harass and threaten the targeted person.

On 18 of September, the China Central Television (CCTV) published a video on its official Weibo account, in which it urged others to use the site to “take off the masks” of the Hong Kong ”rioters”.

The doxing website, was originally registered as hkleaks.org around the end of August and recently moved to a Russian hosting service upon complaint against privacy violations:

The site has thus far publicized more than 90 individuals’ personal data. The majority of the victims are pro-democracy lawmakers, student activists and journalists from Apple Daily and the Stand News. The site labelled them as ”pro-Hong Kong independence rioters”.

The site also encourages others to submit Hong Kong protesters’ personal information to the site administrator via a Russian email address.

It is illegal to publicize personal data according to local privacy law. So, the Hong Kong Privacy Commissioner could only submit a privacy violation complaint to the Russian domain registry and the hosting company as Russia is outside the authority's jurisdiction.

Meanwhile, details of the website have been systematically spread via mainland Chinese social media platforms. The video posted by the state-run CCTV on Weibo captured contents from the doxxing site and urged Chinese netizens ”to act”:

[Repost this! Take a close look at these ugly faces! Take down the mask of Hong Kong rioters] Recently, some netizens have created a “HKleaks” website which have a list of pro-Hong Kong independentists and chaos instigators. The website has three categories: “reporters from poisonous apple”, “pro-Hong Kong independent rioters”, “instigators of chaos in Hong Kong”. It also has a surname index to help the audience to take a closer look at these ugly faces. Take off their masks and let’s act. Repost this! (via WeChat channel: Hearsay from Causeway Bay)

The video was reposted by local media outlets, branches of Chinese Communist Youth League, local police’s weibo accounts and others. It then made its way to Hong Kong via WeChat and Weibo and spread on other social media applications such as WhatsApp.

Many speculated that Beijing has a role in the doxxing of protesters. One of the victims explained to a pro-democracy district councilor Chiu Chu Bong why he believed mainland Chinese police authorities are involved in the doxxing:

A peaceful protester told me he was just an ordinary citizen who had joined the protests. He is working as a clerk but was labelled as a “militant protester” who participated in various illegal demonstrations. The site has published his full name, birthday, facebook account and address. He was detained by the mainland Chinese police for 5 hours two month ago and they checked photos on his mobile phone accusing him of participating in illegal protests. The police downloaded information from his phone with an USB.
He defended that all the demonstrations had police permit. The police asked him to fill in a statement and he deliberately wrote a wrong address on the document. The wrong address appeared on the website. Hence he was 100% sure that the leak came from the police authorities.

Another victim told Apple Daily News that his photo on the website was the photo he used in his China travel card. Hence, he suspected that Chinese government-affiliated China Travel Service (Hong Kong) Limited is one of the sources of the leakage. A third source said that the address and phone number he used to apply for his China Travel Visa were published on the site.

While doxxing has also been used by some Hong Kong protesters to publicize information on pro-Beijing mobs who attacked the protesters and police officers who used excessive force during arrests, the related information would usually be quickly taken down from major platforms as they are against the local privacy law. On the other hand, the doxxing of protesters and journalists facilitated by China state run and party affiliated media outlets, could result in a massive political purge.

Hong Kong journalist association has issued a statement expressing concern about the personal safety of the doxxed individuals.

Meanwhile, internet activists are filing a complaint to the website hosting company demanding the takedown of the doxxing site.

The anti-extradition protests in Hong Kong since June has evolved into a pro-democracy movement for an accountable government. More read more about the protests please visit our special page.