The economy lost more than $1bn in the past 2 months 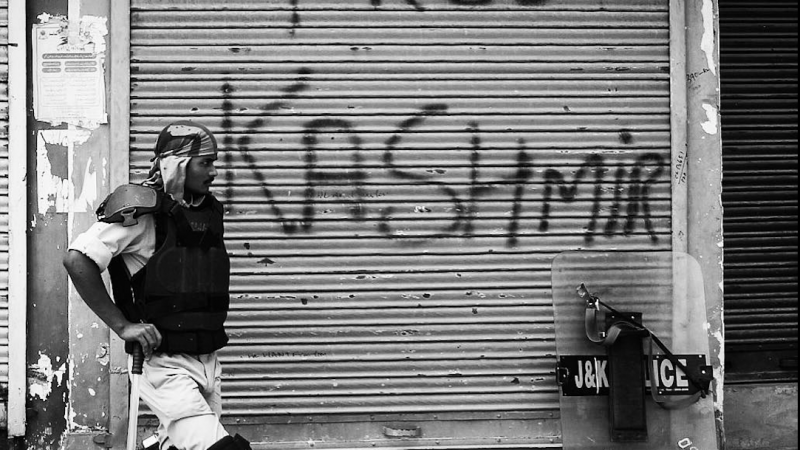 An Indian policeman stands near an alley in the uptown of Srinagar, the summer capital of Indian administered Kashmir. September 11, 2016. Image via Isntagram by Ieshan Wani. Used with permission.

Indian authorities have partially lifted access to communication networks in Kashmir. Access to the internet, however, remains cut off.

On August 5, Srinagar, the main city in Jammu and Kashmir, went under complete lockdown as the government of India revoked Article 370 of the Indian constitution that provided special autonomy status since 1950 to the disputed state of Jammu and Kashmir. Access to mobile, landline, and internet networks were suspended and roadblocks were put on the streets and restrictions on almost all movement were enforced.

The authorities eased up the restrictions in phases. They first restored all 50,000 landlines in the region by the first week of September. On October 14, after 72 days from the lockdown, the authorities restored SMS and call services for postpaid mobile subscriptions. However, prepaid mobile connections and internet services are still suspended. According to the Telegraph India, there are about 400,000 post-paid phones connections and 260,000 prepaid connections in the region. The government did not provide an explanation as to why it restored access to call and SMS services for only postpaid subscriptions. However, this decision could be explained by the fact that users of prepaid subscriptions are harder to track and monitor since unlike users of postpaid subscriptions, they are not required to submit personal data that make it easier for the authorities to identify them such as bank details and mailing address.

Satya Pal Malik, the Governor of Jammu and Kashmir has claimed that “the situation is normal as there had been no violence since two months”. The minister defended the blackout as a measure to protect the “safety of Kashmiris” and said that access to the internet “will soon be restored”, without specifying when.

Despite the easing of restrictions, the authorities soon resorted to disrupting access to SMS services for postpaid subscriptions.

During the night of October 15, text messaging services were disrupted in Jammu and Kashmir when a truck driver was killed by suspected armed rebels who then set the truck ablaze. The services were restrored after a few hours.

Brahma Chellaney, a professor of strategic studies at the Delhi-based Centre for Policy Research commented that the restrictions on mobile communications were placed to limit the activities of militants, who usually coordinate attacks over phones. However, Kashmiris are paying the price as the tourism business which depends on the internet had literally stopped. The restrictions also hamper Kashmiris’ rights to express themselves and access to information online, and prevent them from connecting and sharing with the rest of the world what is happening on the ground.

According to Internetshutdowns.in, 55 shutdowns were imposed in jammu and Kashmir in 2019. The longest shutdown was observed in Jammu and Kashmir was in 2016 when mobile internet services were suspended for 133 days.

Indian Supreme Court lawyer Nitya Ramakrishnan, and Nandini Sundar, a professor of sociology at the Delhi School of Economic visited Kashmir from October 5 to 9, 2019. They mentioned in a report after their visit that Kashmiris are resisting the actions imposed by the Indian Central Government “through satyagraha or non-violent civil disobedience”. They also added that since the entire leadership is in confinement – from mainstream political parties to separatist leaders – the disobedience is entirely voluntary. They both claimed that “almost every single person wanted azadi or freedom”.

In an interview with India Today, the Indian Home Minister Amit Shah said that the situation is “peaceful” and “returning to normal” in Jammu and Kashmir.

However, On Octber 15, 2019, authorities arrested 13 women for holding an anti-India protest in a park in Srinagar, the capital of Jammu and Kashmir. They were carrying placards reading “Respect Fundamental Rights” and “Why downgrade Jammu and Kashmir”.

A group of prominent women in Srinigar, including @hawa_khan1, who peacefully protested India’s decision to revoke the autonomy of Kashmir & the brutality there have been arrested.

India is setting an example. They want to stifle all dissent in Kashmir.

My 80 year old aunt, Ruqayya Sayeed was arrested today and lodged in Central Jail Srinagar with scores of women activists for protesting peacefully against communication blockade in #Kashmir #Article370 pic.twitter.com/gUsoMji0ze

These women were jailed in “normal Kashmir” The Modi govt has no end game in Kashmir pic.twitter.com/fY4nSH20sG

On October 3, journalists from the Kashmir Valley staged a silent demonstration in Srinagar to protest the ongoing communication blockade.

Today, we journalists in #Kashmir had to protest against the communication blockade, which has crossed two months now. It hasn't been an easy task to be a journalist working in Kashmir in these times – without phones, internet or any communication. pic.twitter.com/9LKK2xRDnM

Meanwhile a few sporadic protests against the clampdown were held across India:

Students at the #AligarhMuslimUniversity organized a silent protest against the clampdown in #Kashmir. pic.twitter.com/T1MNXDAnuD

A serious blow to the economy

Meanwhile, a recent report by the BBC quoting industry experts, suggest that the lockdown in Indian-administered Kashmir has cost the economy more than $1bn losses in the past 2 months. Until the lockdown, the tourism industry was one of the main sources of Kashmir's income supporting 700,000 people. The industry was suspended during this period. Three thousand hotels in the valley lie empty, incurring daily expenses and payments of unpaid staffs. Some 400,000 migrant labours have left since the start of the lockdown creating labour shortage. Five thousand travel agents will still find it difficult to arrange tours even though the ban on tourism has recently been lifted as there is still no internet. Most of the activities in the handicraft industry and the fruit industry are suspended due to the restrictions.

From handicrafts to tourism, to fruit and other wholesale and small businesses, the lockdown in #Kashmir has cost the region's economy more than $1bn in two months.

Not to mention, the trauma, dejection, and depression that the locals are facing. https://t.co/AaGEte2pvc