Mozambican journalists and activists targeted with threats in election year

Threats sent via SMS are not unprecedented in Mozambique 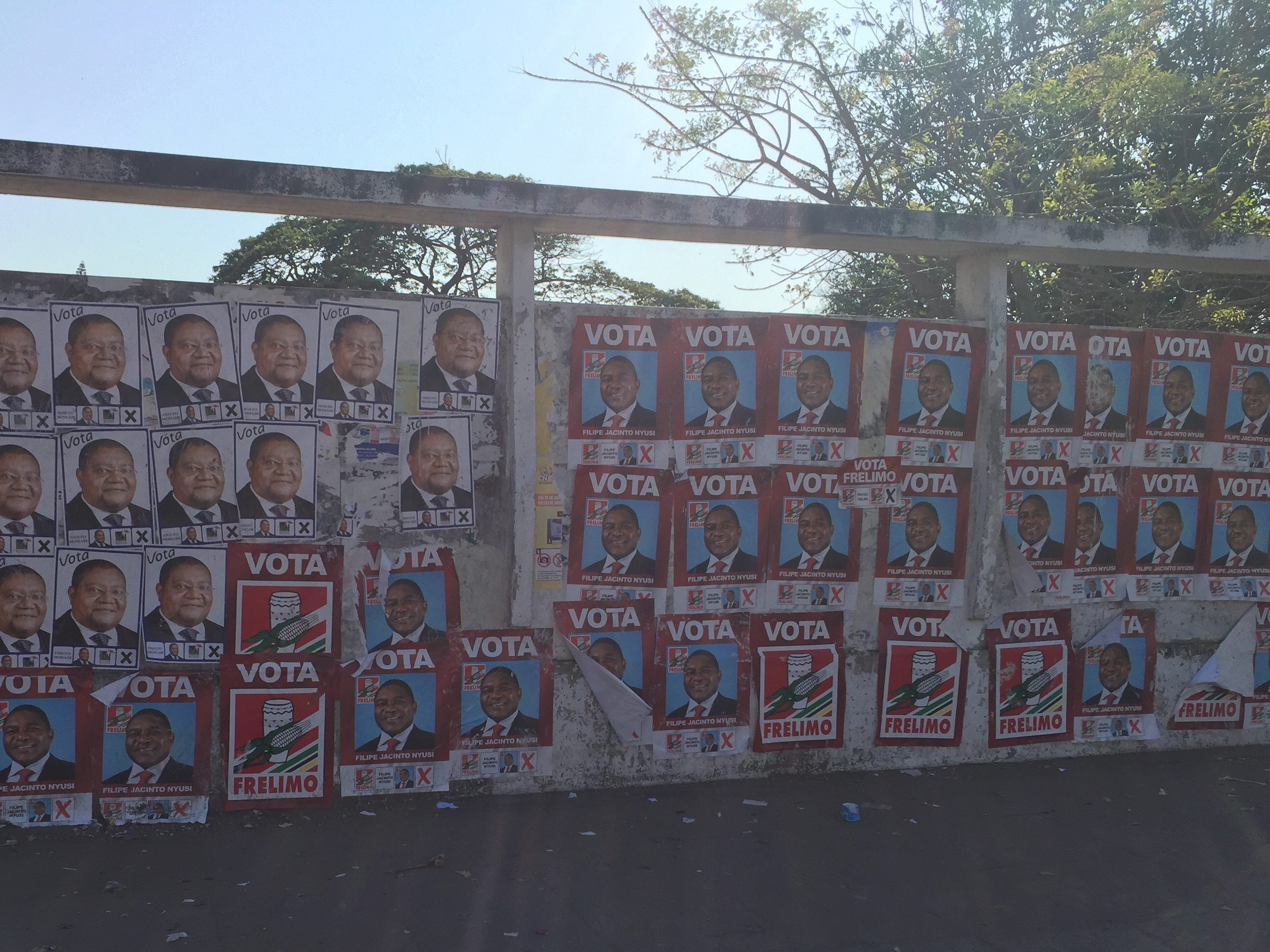 2019 elections posters in Mozambique. Photo by the author, used with permission.

On October 15, Mozambicans cast ballots for president, parliament and provincial governors in the sixth general election held in the country since the multiparty constitution was approved in 1992.

The main opposition party RENAMO, as it has done at every poll since 1994, has rejected the results. It accuses FRELIMO of defrauding the ballots. The government denies this.

Meanwhile, missions by the Electoral Institute for Sustainable Democracy in Africa and the European Union highlighted irregularities in the voter registry and condemned the violence it says marred the campaign season.

However, observatory missions by the African Union, the Community of Portuguese Language Countries and the Southern Africa Development Community have jointly declared that the election was conducted in an “orderly and peaceful fashion” and “in accordance with international standards,” positing that incidents of violence were “isolated” and “did not compromise the integrity of the process.”

Partial results show President Filip Nyusi headed for reelection with over 75% of the vote. His FRELIMO party, which ruled Mozambique since 1992, is expected to obtain two-thirds of the seats in the unicameral legislative and to elect all 10 provincial governors.

In this election year, human rights organizations documented several cases in which journalists and activists were threatened and subjected to pressures interfering with their work, including threats that were sent via SMS.

One day before the elections, community radio association FORCOM said on Twitter that one of its journalists, Naldo Chivite, received a threatening SMS. ‘’Chivite, you must have attention about what you will say on Tuesday [election day]. You have talked too much about the Nampula [a province in northeastern Mozambique] elections and we've accepted it. Be careful,’’ the message read, according to FORCOM.

In a press release, the association said that they filed a police report and requested protection for the journalist, adding that threats such as those violate the right to freedom of expression.

Global Voices spoke with Chivite, who said he suspected the threat was sent by members of a political party, without specifying which one. He added that he received similar threats during the 2014 elections.

Established in 2004, FORCOM is the national forum of community broadcasters in Mozambique. It has 45 community radios from across Mozambique as members.

Another case involved Tomé Balança, a broadcaster at Radio Chuabo FM. According to the radio's director Zito Ossumane, unknown persons broke into Balança's home on election day, ”torturing him and threatening him with death,” Ossumane said on Twitter. Ossumane himself said he has received threatening calls on election day:

This is preceded by several calls which I received as media manager to stop the broadcasting and stop working to @Jornal_Txopela and @ChuaboFm websites during the election day.

On January 18, Fátima Mimbire, activist and former employee of the Center of Public Integrity (CIP) received intimidating messages and death threats through social media. CIP is a civil society organization that helps with electoral observation in Mozambique.

According to Amnesty, ‘’known FRELIMO militants had been advocating violence against her on social media.’’ Member of parliament Alice Tomás called for her to be raped at that time: ‘’She talks a lot and must be raped by 10 strong and energetic men to teach her a lesson,’’ the MP said on Facebook.

These types of threats, particularly via SMS and social media, are not unprecedented in Mozambique.

According to MISA-Mozambique in Tete, the threats, which were circulated via WhatsApp, forced the journalist to take refuge in an unknown place. The journalist started receiving threats in the morning of October 11, 2018 when his newspaper published municipal election results in Moatize that showed the main opposition party winning.

He told Global Voices that he was warned by people close to him that information was circulating in a private WhatsApp group that he should be kidnapped.

In previous elections, mobile and internet connections were key tools for election monitoring efforts in Mozambique. Citizen observers have used their cameras to document any issues or irregularities on election day to contribute to the transparency of the voting process.

Unlike some of its neighboring countries, Mozambique does not have a record of restricting access to networks at times of elections and political upheavals. For example, Malawi partially shut down the internet and social media during the counting after the May 21 vote, while in January Zimbabwe restricted access to social media, and entire networks in certain areas of the country, in response to anti-government protests.

However, threats, whether online or via SMS and calls, represent a gross violation of Mozambicans’ rights to access information and expression. They contribute to an environment of fear and intimidation for journalists and activists to do their work without interference at a time when the public needs credible reporting.