Despite ban, Telegram survives in Russia — but for how long? 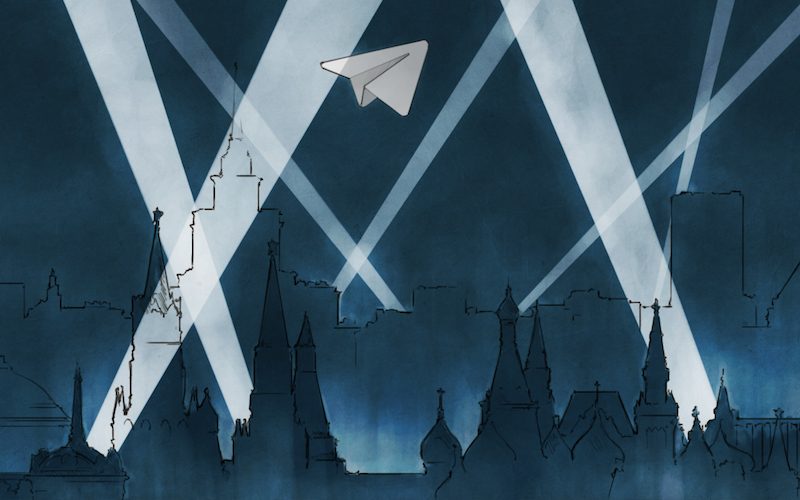 The paper aeroplane, symbol of the Telegram secure messaging app, over Moscow. Illustration by Tom Venner, used with permission.

The mayor of Khabarovsk was outraged when he saw the memes. On September 4, Sergey Kravchuk reported a little known Telegram channel to the police for mocking him and his colleagues. In doing so, he gave the channel named Vorsin Memes a boost; back then, it had just 114 subscribers. At the time of writing, the anonymous opposition channel has nearly 2,100. The more important point is that Kravchuk should never have been using the encrypted messaging service.

That's because Telegram is supposed to be banned in Russia. In June 2017 Roskomnadzor, the Russian state's communications watchdog, ordered Telegram to comply with a demand to hand over its encryption keys to the FSB, Russia's domestic security services. After Pavel Durov, founder of Telegram and the popular Russian social network VKontakte, refused to comply, a Moscow court ordered that Telegram be blocked (Durov had already fled Russia in 2014, after being made to sign over VKontakte to Kremlin-linked businesses.)

Then on April 18, 2018, Roskomnadzor ordered that Russia's internet service providers comply with the ban. A fiasco followed; by blocking IP addresses commonly used by the encrypted messaging app, dozens of other sites were affected. Users of online services provided by Google, Amazon, and Spotify among other tech giants reported outages. But it didn't end there; the websites of universities, media outlets, and even of Roskomnadzor itself all experienced disruption. Even the state-owned Sberbank sent instructions to its employees on how to evade the ban. At the end of that month, over 12,000 people attended a protest in Moscow against Roskomnadzor and in support of digital freedoms.

Over a year later, Telegram thrives in Russia, where it has approximately 14 million users. Roskomnadzor has unblocked the IP addresses which inconvenienced users of other online services. State officials use it with abandon; Kremlin spokesman Dmitry Peskov freely admitted that he used the application, and Margarita Simonyan, manager of the avowedly pro-Kremlin news network RT, is an avid Telegram user. Russia's political elite still appear divided over the ban; in September, Russia's Ombudswoman for Human Rights Tatyana Moskalova even stated that she opposed it and urged “compromise” as a solution.

Compromise makes sense. In April, a study by TGStat revealed that 48% of the platform's users in Russia did not experience any issues with accessing Telegram, nor did they need to use VPNs or other techniques to do so. Only 5% said that they were completely unable to access Telegram, and the remainder did so with free or paid proxy servers or VPNs. What makes it so popular?

Since its creation in 2013, Telegram has come to offer more than private messaging. Its users can create public “channels” or newsfeeds where they can post updates to tens of thousands of subscribers. These channels cover everything from celebrity gossip and movies to language learning, fashion, and of course plentiful memes. Importantly, many Russian news publications now maintain their own Telegram channels.

And while Telegram might not be as secure as many believe it to be, the availability of end-to-end encryption for one-on-one chats (although this feature is not on by default), attracts influential bloggers, journalists, and political commentators with something critical to say, or who need to communicate with sources without interception. These include blogger Ilya Varlamov, journalist Pavel Pryanikov, who runs the channel KrasnyZion, Pavel Chikov, director of the Russian human rights NGO Agora, MediaZona's Sergey Smirnov, Ekho Moskvy's Anton Orekh (who runs Antony Nut), the writer and columnist Oleg Kashin, and radio personality Aleksandr Plushchev (PLUSHEV). In 2017, Kashin and Plushchev attempted to sue the FSB for its attempts to demand Telegram's encryption keys. For Russia's opposition and for critically-minded journalists, the platform is more popular than the compromised VKontakte, where some users have been prosecuted for their political statements online.

Furthermore, ability to run channels anonymously adds a certain intrigue to Telegram. The channel Nezygar, for example, has 250,000 subscribers and is the most hotly debated given the controversy over its owner's identity. The blogger StalinGulag, whose identity was unmasked by journalists in 2018, also runs a hugely popular channel. Some anonymous political channels present themselves as high-placed sources with exclusive political tips; thus a thriving Telegram rife with “black PR” is not necessarily an objective source of information. As an investigation by Proekt.Media in December 2018 revealed, since the ban the platform had been the focus of a concerted effort by pro-Kremlin spin doctors to infiltrate and discredit members of the opposition, spreading disinformation rapidly among channels and buying some channels out. As it turned out, Telegram was quite capable of achieving the former without the authorities’ help.

Much like other governments’ attempts to crack down on encrypted communication platforms, Russian officials such as FSB head Alexander Bortnikov have also sought to portray Telegram's refusal to play ball as a gift to terrorists. While there is evidence that the platform is used by far-right and Islamist extremists, this line has met short shrift by many RuNet users. The popular vlogger Ruslan Usachev remarked sarcastically:

It's worth recognising that the blocking of Telegram has worked. I was walking home today and didn't meet a single terrorist on the way.

This cynicism about the motives for the block seems widely shared. As Andrey Pertsev wrote for Carnegie Moscow's website last April, the Telegram ban has politicised many Russians, as the state has intruded on a “grey zone” for public expression prized by many Russians who are not politically active. Rather than continuing with their gossip and memes, writes Pertsev, they are now actively sharing ways to avoid the ban — prompting them to discuss whether it is just. That is an important point in light of Russia's controversial drive towards a “Sovereign Internet,” which becomes law on November 1.

That means that Russia's Telegram ban is hard coded into a broader project to rein in the RuNet. Consequently, while Roskomnadzor officials appeared surprised at the force of public resistance to the ban, they are not giving up. On October 8, the organisation's head Alexander Zharov acknowledged that the old system of blocking was ineffective and announced that a new system was being engineered. “Within a year, we'll have something to tell you,” said Zharov. His colleagues at Russia's Ministry of Communications do not share this optimism; in comments the same month, deputy minister Alexey Volin questioned the efficiency of blocking and assured Russians that using Telegram is not in itself illegal.

An admission of defeat? Perhaps. Sarkis Darbinyan, manager of Roskomsvoboda, a Russian NGO campaigning for digital freedoms, told RuNet Echo that he is sceptical about the progress of the ban:

The failure to block Telegram is, without a doubt, a demonstration of the impotence of the Russian authorities when it comes to enforcing their own directives. During the year which has passed after the ban on Telegram, it has become obvious that neither Roskomnadzor nor telecom operators are prepared to block web services and applications which refuse to comply with Russian law and cooperate with the secret services. I think one of the reasons for the adoption of Federal Law 90-FZ in May, also known as the ‘sovereign internet bill’, was the desire to more effectively block services such as Telegram.

It seems to me that it will be a long game of cat-and-mouse. Services will continue to constantly rotate their IP addresses, hide behind the infrastructure of tech giants such as Google and Amazon, and also use techniques like steganography to smuggle their traffic under the cover of something else which the Russian authorities would not dare to block.

In the meantime, this technical standoff will continue. I think that the ECHR [European Court of Human Rights] will consider both the complaints of Telegram itself and those of its users, submitted by us as part of our ‘Battle for Telegram‘ campaign. I have no doubt that we will be successful. The issue of access to encrypted communications and the human right to use encryption is an issue of relevance not just for Russia, but for the entire Council of Europe. If Russia does refuse to meet international standards and simply refuses to abide by the rulings of the ECHR, there could be negative consequences for the Russian authorities, from diplomatic problems to sanctions.

If Russia ever succeeds in its Telegram ban, it raises the question as to which social media networks will be in the authorities’ crosshairs next. After all, Facebook and Twitter have already refused to comply with Moscow's demands to host data on Russian users servers based in Russia.

Just how far is the Kremlin prepared to take on the tech giants for the sake of its “sovereign internet”?