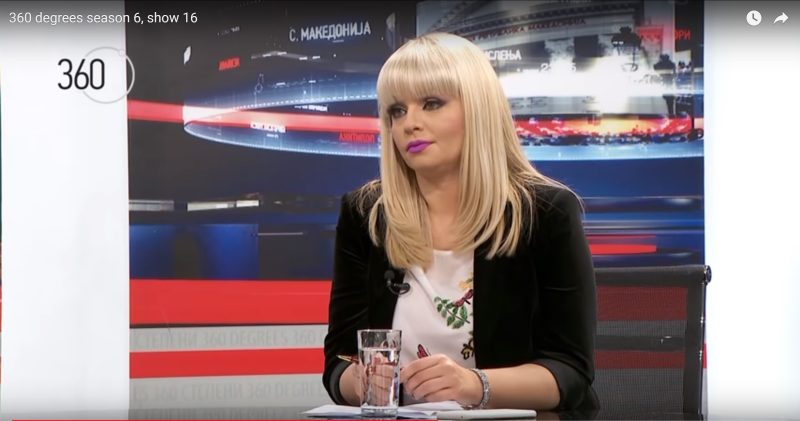 This story originally appeared on Meta.mk News Agency, a project of Metamorphosis Foundation. An edited version is published below as part of a content-sharing agreement.

Daniela Rangelova, a member of Parliament of the Republic of North Macedonia from the right-wing populist party VMRO-DPMNE that ruled the country from 2006 to 2017  confirmed the existence of the party’s troll army during a TV debate conducted by the “360 degrees” show on 8 November 2019 in Skopje.

When asked about her communication with the current party leadership and their disagreement with some of her positions —including her support to the EU agenda — and public appearances, she said that they have no courage to say what they feel in her face, but rather use their “bots” as conduit.

They all act very nice when we meet face to face, but after each of my public appearances I suffer lynching on the social networks by party’s bots, which are familiar to me, who were functioning in the same manner at the time when I was a member of the party management, and by people who are paid by the party to lynch people that express disagreement.

Digital rights activist Violeta Gjorgjievska was one of the many people who reacted on Facebook to this revelation:

I ask them publicly in this way, even though they are no longer my Facebook friends, for how much did you sell our common memories, memories of going out as teenagers, socializing in the neighborhood, from attending weddings (some of them become members of my family), from the sleepless nights full of discussions during the university studies, the memories of hanging out in high school hallways… How much did it cost? Did you sell them for 500 or 1000 denars? Did you get paid by the victim or by a comment? …

It's even more tragic that some of them left the country and moved out to the West… Even though they worked against NATO and EU… I can only state that Mark Zuckerberg haven't created Facebook so you can play Maskbook… But at least one good thing from this is that the masks are off.

Their job is to promote ‘destructive ideas’

This is not the first time for high party officials to reveal details about the existence of the “troll army” or “bots” – a branch of the party propaganda machinery intended for coordinated and orchestrated influence over the public opinions over the social networks.

”Armies” or “factories” of trolls are malicious social network users who act in coordinated manner. These armies are usually comprised of people —hiding behind false identities — hired to troll and spread propaganda, and “bots” (short for robots), ”unmanned accounts programmed to spread certain messages.”

The most famous example of entity running a troll army is the company Internet Research Agency from St. Petersburg, accused of attempts of malicious influence across the world in line with Kremlin’s goals. The terms “bots” has become common in the Balkans region as a nickname for the “internet team” of the Serbian Progressive Party (SNS), who are called “SNS bots” by its opponents.

A year ago, in an interview with Kanal 5 TV on 28 November 2018, Nikola Todorov, a former government minister in several VMRO-DPMNE administrations run by current fugitive from justice Nikola Gruevski (who has subesequently been convicted on corruption charges and received asylum in Hungary), pointed out that the party has created an army of “party political bots” used for manufacturing an illusion of support by the people or the public, but also serve as intimidation mechanism using serious threats to hinder the work of individuals who are blacklisted by the party. In the interview, he said:

It’s those bots. Political party bots, whose job is to promote all those negative and destructive ideas of VMRO-DPMNE management, and to spread hate speech and falsehoods….This whole system for lynching via social networks that was built by VMRO-DPMNE is very dangerous at this moment. I would say… I’m afraid the people who work for that system would end up in jail for obeying the orders of VMRO-DPMNE management. And these are young people, in their twenties, who sit behind computers…

Todorov was let off from the political party leadership structures because he didn’t support the campaign for boycott of the 2018 consultative referendum on support of entering EU and NATO with a changed name of the country, despite statements made by the party's president Mickoski that anyone can vote according to their conscience.

VMRO-DPMNE has not admitted that the party run the online “I Boycott” campaign, through its troll army. However, the social media profiles active in the pro-boycott campaign were the same used before and after the referendum to promote party positions and for cyberbullying people it has blacklisted.

Statements made by Rangelova in November and Todorov last year indicate that the troll army has several branches, connected to the Center for Communication of VMRO-DPMNE, which have been financed through state resources over the years of their rule between 2006 and 2017.

According to Meta.mk's monitoring of the bots’ activities throughout the years, the troll army seems to consist of three branches. One branch runs a network of individual (non-anonymous) and fake (anonymous) social media presences, the second branch consists of persons from the media outlets close to the party which serve both as source (incl. anonymous authors) and amplifiers of the social media manipulations with articles presenting them as ‘voice of the people.’ The third branch is a kind of foot soldiers, party loyalists who think they owe their employment in the public administration to the party, with a duty to like or share content produced by the first two branches, so they would be visible to their wider circles of friends. They would receive instructions to do this regularly (promoting new posts by select pages), or to target certain post with comments of approval (for party representatives) or disapproval and hate (for undesirables).

Leaked wiretaps published in early 2015 indicated that beseides ‘broadcasting’ party propaganda, the troll army operatives are also engaged in surveilance, or monitoring of activities of designated persons of interest over social networks. For instance, the “Bomb number 7” leaks showed that then-government minister Mile Janakieski gave orders to officials to threaten civil servants with resignation or demotion for “liking” an undesired Facebook page (owned by then-opposition candidate) during an election campaign. 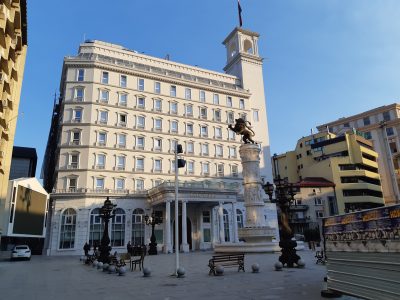 Later that same year, European Union facilitator Peter Vanhoutte revealed that the total amount paid in personal income taxes by the party for its employees in 2014 was about 3,200 euros — the equivalent to employment of one person. In contrast, the party had been engaging far more people in its lavish headquarters in Skopje.

During the subsequent period there were more indications that such people are possibly paid through suspected fictitious contracts for services paid through different state institutions.

For example, Hungarian-American lobbyist Jason Miko, who for years was presented as ‘independent analyst’ writing weekly pro-VMRO-DPMNE columns in the now-defunct daily “Dnevnik,” was  in 2015 and 2016 paid for his services though contracts for ‘informing the domestic and international public’ with the Ministry of Defense.

On the other hand, over the years, some local members of the troll army were recruited from the ranks of prospective young social media ‘influencers,’ and molded into columnists in collusion with media outlets controlled by the political party.

Over a year ago, Meta.mk reported about a journalist investigation which determined that an Internet Research Agency operative specialized in establishing “bot armies” had a working visit to North Macedonia in June 2015. Anna Bogacheva, who was also charged by US special counsel Robert Mueller for allegedly interfering in the US elections, refused to explain with whom she had been working in the country in the months after then-President Gorgje Ivanov showed support for Putin by attending the Victory Day parade in Moscow, which was boycotted by NATO and allied countries in protest of aggression against Ukraine.

In the subsequent period the Kremlin and its Balkan proxies provided diplomatic and propaganda support for VMRO-DPMNE regime, which lost power after the elections of December 2016. Its promotion of conspiracy theories contributed to escalation of tensions during the first half of 2017, culminating with the attack on the parliament organized by top VMRO brass [add link on parliament attack].