Human rights activists have been targeted in online campaigns 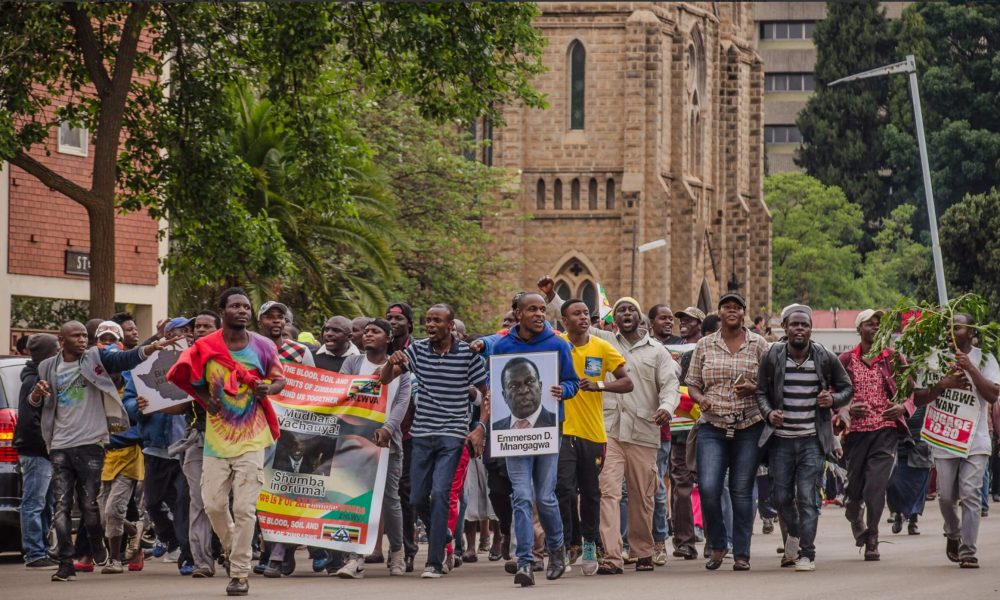 On November 18, 2017, protesters marched to celebrate Robert Mugabe's removal from power. Emmerson Mnangagwa was sworn in as president a few days later. Photo by Zimbabwean-eyes via Flickr.

Their mandate is clearly laid out. They have no doubt about their mission and execute it with relentless fervor: Commonly known as Varakashi, Zimbabwe’s online army defends President Emmerson Dambudzo Mnangagwa on any issue. Varakashi is the Shona word for “destroyers.” They troll social media platforms — especially Twitter — and criticize anyone who dares to challenge Mnangagwa’s policies or leadership.

Varakashi members range from government-sponsored stalwarts to ruling Zimbabwe African National Union-Patriotic Front (ZANU- PF) supporters. Their overarching aim is to push the narrative that anyone who disagrees with the Zimbabwean government is an agent of foreign powers — and therefore unpatriotic.

In March 2018, just before the presidential and parliamentary elections were scheduled for July the same year, Mnangagwa instructed his ruling ZANU-PF party youth league to batter his opponent on social media. “We are not techno-savvy. Don’t be beaten to the game. Get in there and dominate social media,” he told the youth party members at the ZANU PF youth league National Assembly.

“I should commend you for spearheading the social media campaign blitz you christened #EDhasMyVote,” he said.

Mnangagwa's command immediately set the tone for the youth league and other ruling party supporters to go on an all-out online campaign of harassment and threats aimed at anyone perceived to be anti-Mnangagwa policies, even after the 2018 elections which Mnangagwa won.

Civil society leaders, opposition activists, independent media and even foreign embassies have been the subject of targeted online campaigns laced with vitriolic language. This has also been punctuated by a mix of fake news, rumor, hate speech, disinformation and misinformation.

Zimbabwe currently faces serious economic and social implosion as high fuel and food prices, coupled with growing hyperinflation, that threaten stability. Most households and businesses have to contend with 18-hour power cuts and chronic water shortages.

Yet, the government remains optimistic about improving the nation’s economic fortunes. Finance Minister Mthuli Ncube recently said while presenting his 2020 budget to parliament that Zimbabwe’s economy is forecast to grow by 3 percent in 2020, buoyed by improvements in agricultural output and electricity supplies.

However, the economy remains the subject of intense debate online, as citizens call for increased government accountability. This has stimulated a new wave of online mobilization as Zimbabweans — at home and abroad — engage with politics online. Under Mnangagwa’s “new dispensation,” a period so far marked by human rights abuses and corruption, free online debate is thwarted.

The Varakashi have undoubtedly had an effect on public discourse about government policies.

In May 2019, the government took the spotlight when it launched a campaign to arrest seven human rights activists at Robert Mugabe International Airport as they returned from a capacity-building workshop on nonviolent protest tactics in the Maldives. Authorities accused them of attending a workshop organised by a Serbian nongovernmental organization called the Center for Applied Nonviolent Action and Strategies (CANVAS).

The activists were arrested after accusations and pressure by the Varakashi on social media, of “plotting to overthrow” the government, and were ultimately charged with subverting the government.

On Twitter, one government supporter posted the workshop's agenda and tweeted that attendees were flown to the Maldives to receive training on how ”to topple the govt we voted for.” While some users pointed out that the agenda he shared contained no language supporting these allegations, others described the attendees as ”sell-outs” and called for them to ”rot in jail.”

Prior to their arrests, on May 17, the state-owned and controlled Herald newspaper accused civil society organizations of “plotting to unleash violent protest” in Zimbabwe, citing the Maldives meeting, according to Amnesty International.

The seven activists were charged with ‘subverting a constitutional government’ under Section 22 (2) of Criminal Law (Codification and Reform Act), punishable by 20 years in jail. The activists, who were later released on bail, include Rita Nyampinga, director of Women Prisoners Support Trust and George Makoni of the Center for Community Development in Zimbabwe.

In another case of Varakashi harassment, popular comedian and political satirist, Samantha Kureya, went into hiding in August after being abducted from her home by unidentified armed men, then beaten, stripped and made to drink sewage. The Varakashi sent a threat to Kureya on Twitter just hours before the abduction.

Kureya had been arrested earlier in 2019 for “public nuisance” after appearing in a comedic sketch wearing a police uniform.

It was widely reported that this attack was one of several that targeted critics of President Mnangagwa and his party. Human rights activists believe that Zimbabwe’s security services were responsible.

The government and the Varakashi denied reports of Kureya's abduction and torture. Zimbabwe’s Deputy Information Minister Energy Mutodi said the abudction was part of a comedy act by the comedian.

Gonyeti Gonyeti did a comedy on police accommodation & it’s apparent she has done another one on abductions. We will not be fooled.

Government supporters repeated the same narrative. One accused medical doctors of producing ”false medical exams” for Kureya and that these ”must have their medical licenses canceled.” Another individual tweeted that Kureya’s abduction and reported torture were most likely a publicity stunt.

As it was in the beginning

Varakashi have also targeted ambassadors from the United States, the European Union and Britain online.

As social unrest grew over World Bank and IMF-supported austerity measures, Zimbabwe embarked on a land reform program in 2000 that witnessed the violent displacement of about 4,500 white commercial farmers from 19 million acres of prime land.

Zimbabweans have been divided regarding the sanctions, with ”pro-government supporters blaming the country's economic and political problems on sanctions and government critics blaming corruption,” according to the Solidarity Peace Trust, a non-governmental organization based in South Africa.

Former President Robert Mugabe used the sanctions rhetoric as a political trump card for years, suggesting that Zimbabwe's woes were due to unjust victimization rather than economic mismanagement.

A few months before Mugabe’s ouster, Mnangagwa and his special adviser, Chris Mutsvangwa, accused Mugabe of being disingenuous and politically expedient by hiding behind the sanctions mantra, arguing that they could do a better job running the country. 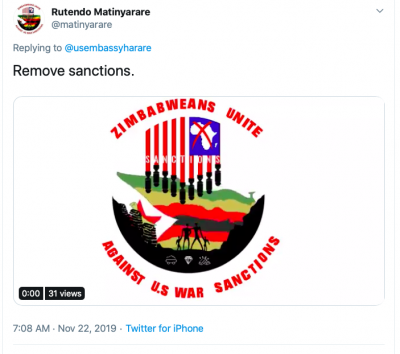 Figure 1. Screenshot of a response sent to the US Embassy in Zimbabwe on Twitter. Screenshot taken on November 25.

Almost two years into his rule, Mnangagwa made an about-turn and now blames Zimbabwe’s problems on sanctions. The Varakashi leave no stone unturned in pushing this narrative, including lambasting Western ambassadors on social media.

When, on November 14, the US Embassy in Harare announced in a tweet that ”16 community based Zimbabwean organizations received more than $442,000 in US funds for agriculture, business and health development projects across the country,” government supporters responded with calls to remove sanctions (figures 1 and 2).

Figure 2. Screenshot of a response sent to the US Embassy in Zimbabwe on Twitter. Screenshot taken on November 25. 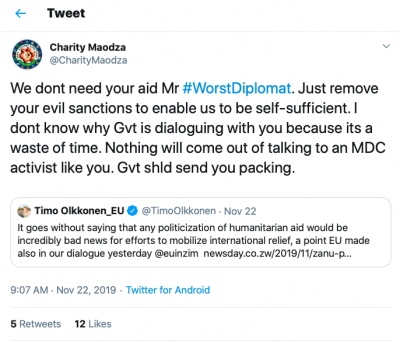 Figure 3. Screenshot of response sent to EU ambassador to Zimbabwe on Twitter, November 26.

In another instance, on November 22, EU ambassador to Zimbabwe Timo Olkkonen posted an article about a Zanu-PF member of parliament vowing to ”starve” supporters of the opposition MDC party by denying government aid. In his tweet, Olkkonen warned against ”any politicization of humanitarian aid.”

Government supporters on Twitter reacted by once again calling for the lifting of sanctions (figures 3 and 4). 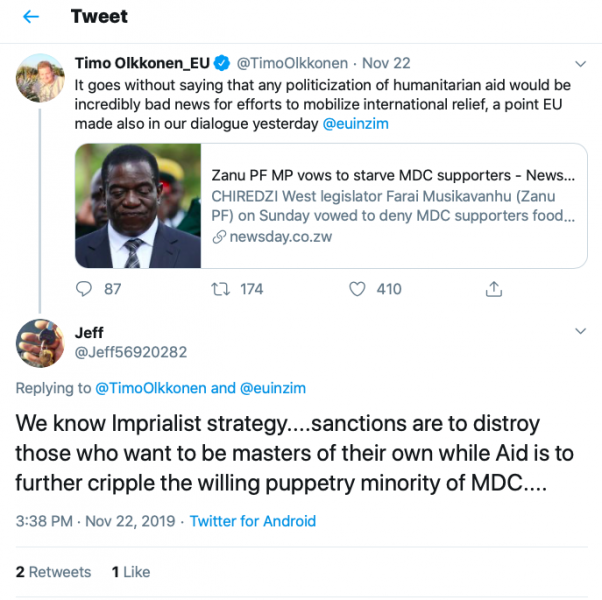 Figure 4. Screenshot of a response sent to the EU ambassador to Zimbabwe on Twitter, November 26.