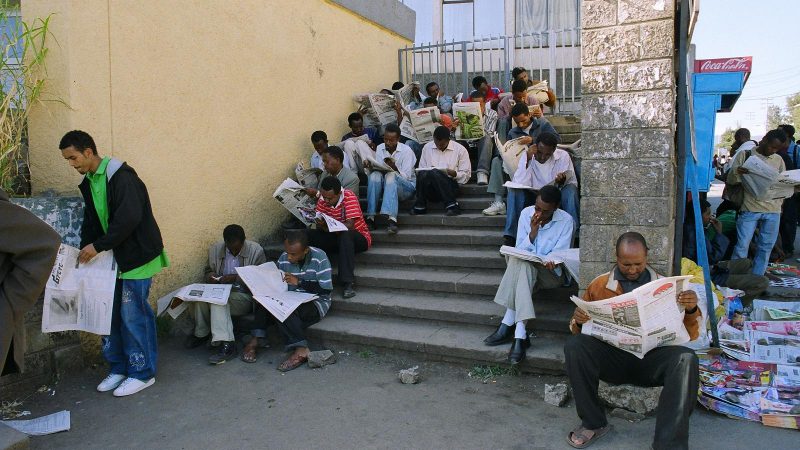 Citizens catch up on the news in Addis Ababa, Ethiopia, on February 17, 2008. Photo by Tristam Sparks via Flickr CC BY-NC-ND 2.0.

Editor's note: This article by Samuel Gebre, an Addis Ababa and Abidjan-based journalist working in East and West Africa, is republished through a partnership between Global Voices and IFEX. Read the original story here.

The proliferation of “hate speech” and false information has become a global phenomenon, and Ethiopia is no exception — but a new attempt to curb the vice with new legislation might just do more harm than good.

There are concerns that Ethiopia’s new Hate Speech and False Information law will stifle freedom of expression and return Ethiopia to its repressive past.

Befekadu Hailu, co-founder of the Zone 9 blogging collective and 2019 recipient of PEN International’s Writer of Courage award, has first-hand experience of Ethiopia’s repressive past; he was jailed four times under the country’s Anti-Terrorism law.

Hailu is wary of the new bill:

Hate speech is a big problem in Ethiopia. I think trying to regulate speech through laws in the Ethiopian context makes it all the more dangerous.

The bill “could really threaten democracy,” he added.

The government says that the aim of the Hate Speech and False Information law is to “tackle the erosion of the nation’s social cohesion, political stability and national unity.” The legislation proposes a five-year maximum jail term.

But what exactly are we talking about when we talk about “hate speech”? We all think we know what it is, or isn’t, and that we will recognize it when we see it. And we can imagine how dangerous and toxic it can be. The problem is that when it is used as a term to describe speech that is excluded from freedom of expression protections and subject to serious legal sanctions, it can be abused by those in power and bring about a chilling of critical expression more generally.

ARTICLE 19, an advocacy organization, has a useful resource on the topic of how to identify hate speech and effectively counter it.

“One of the problems is that the types of speech that such laws criminalize are often vague and overly broad, which not only makes it hard for people to know how to stay on the right side of the law but also makes them easy to abuse,” Human Rights Watch’s Laetitia Bader said. “This is particularly worrying given the country’s very recent history of using vague and overly broad laws to clamp down on legitimate dissent and speech.”

Berhan Taye, a senior analyst at Access Now, an advocacy organization, argues such assessments need to be based on evidence. “The current research that’s being referred to justify this law is one that was published back in 2015 when the political landscape of the country was very different.”

The Ethiopian government was notorious for arbitrary arrests of activists, journalists and opposition leaders in the past three decades. Ethiopia regularly shut down the internet without explanation. It is only in the past year and a half, under a new prime minister, that rapid political reforms came. Thousands of political detainees and journalists were freed. Exiled activists and politicians were welcomed to participate in local politics.

David Kaye, the United Nation’s special rapporteur on the right to freedom of opinion and expression, has called on the Ethiopian parliament to fast-track the repeal and replace the process for the “much-despised Anti-Terrorism Proclamation.”

As the political space has opened up, hate speech and disinformation incidents have been on the rise. Recent ethnic and religious violence has led to the deaths of hundreds of people in the tense and fragmented country. Amnesty International’s Fisseha Tekle suggests that the governmental and non-governmental organizations should work to address these root causes of the hostility and inequality among groups before jumping to legislation.

Read more: In Ethiopia’s disinformation epidemic, the crumbling ruling coalition is the elephant in the room

“The country has, over the last few months, faced very serious bouts of communal violence and the government is, justifiably, under pressure to respond,” Bader said, adding that “we see little evidence however that laws criminalizing hate speech achieve their stated purposes, and they have often been abused.”

Speaking earlier this year, Abiy Ahmed, Ethiopian prime minister and the former head of INSA, Ethiopia’s cybersecurity agency, firmly urged “constructive” and educational use of social media, warning that there was no place for platforms that would destroy the country.

In recent months, violence was sparked when influential activist, Jawar Mohammed, who heads the Oromia Media Network, with 1.7 million Facebook followers, posted that the state had withdrawn his security personnel, endangering his life. In subsequent days, homes and places of worship were destroyed and 86 people lost their lives.

The bill was approved by the cabinet a few weeks later.

Following talks with civil society and government officials this week, Kaye warned that the bill threatened freedom of expression. “As constructed presently, it could reinforce rather than ease ethnic and political tensions,” he said.

“It seems obvious to say that the bill is politically motivated,” said Helefom Abraha, a researcher at the Information Policy and Governance at the University of Malta, who formerly worked at INSA as a cyber law and policy researcher in Ethiopia. He argued that Ethiopia already has the computer crime proclamation and the mass media proclamation which, if implemented, could curb hate speech and the dissemination of false information.

“I know there could be mechanisms to address this issue by using the existing criminal law,” said Elias Meseret, a prominent journalist in Ethiopia addressing the issue of fake news.

“While many Ethiopian women use it as a tool to make connections and express themselves, it can also be dangerous. Many women complain of being stalked and harassed on social media platforms, and sometimes this behavior exacerbates or compounds harassment they face in day to day Ethiopia,” said Haben Fecadu, a campaigner with Amnesty International.

Taye is not confident in the country’s law enforcement agencies, noting their reluctance to investigate offline gender-based violence, let alone online gender-based violence. “Legal protections are already difficult to guarantee for the average person, and this could have disastrous consequences for Ethiopian women facing violence – both online and offline.”

No end in sight

“Most of the dissemination of false info and hate speech is online and by anonymous people, or by those living abroad where there is no anti-hate speech laws, so it is less likely to be effective,” Hailu said.

Ethiopia has a politically active diaspora in North America and Europe, whose support pushed the Ethiopian government to reform in 2018. There is also a growing internet-savvy population in Ethiopia now. Ethiopia has just over 6 million active social media users and the numbers are growing quickly, according to the Global Digital 2019 report.

“Given the increasing digitalization and internet penetration in the country, this problem [of hate speech and false information] will only continue to grow,” Abraha said.

As the social media user bases grow, the companies behind the platforms must take up more responsibility, David Kaye said.

They cannot be mere bystanders while playing such major roles in Ethiopia’s public square. They make money from countries, and here they should devote resources to supporting independent media that itself can counter hate speech. What they should do is create a fund — let’s start with $10 million dollars, a rounding error for both Facebook and YouTube.

Bader is not against a hate speech law in principle, but argues that the government needs a comprehensive strategy and that such a law — better-drafted — would only be a small part of it:

[The government] should be developing public education campaigns, and high-level officials at both the federal and regional level should be speaking openly about the dangers of hate speech and the importance of tolerance.

The government has to support and promote independent initiatives to debunk fake news and fight hate speech. There are some fact-checking initiatives, but they do not have the proper training and resources.

“The best way to fight these problems is to work on media literacy and open up space more, said Messert, who fact-checks social media posts on a daily basis. While he maintains that the bill could be an important tool to deal with hate speech and disinformation, he added:

At the same time, I share the widespread concern that it could be used to stifle dissenting voices, as has been the case with the anti-terrorism law. To prevent this, the law should be applied by a competent judicial body and it should only be used for the purpose it was intended to deal with.

Messert’s comment about a competent judicial body resonates; there is still distrust of the judiciary in Ethiopia, and arrests based on this new law could be seen as politically motivated and intended to stifle dissenting voices as the country moves towards very important elections in 2020.