The Court gave the government one week to review the ban 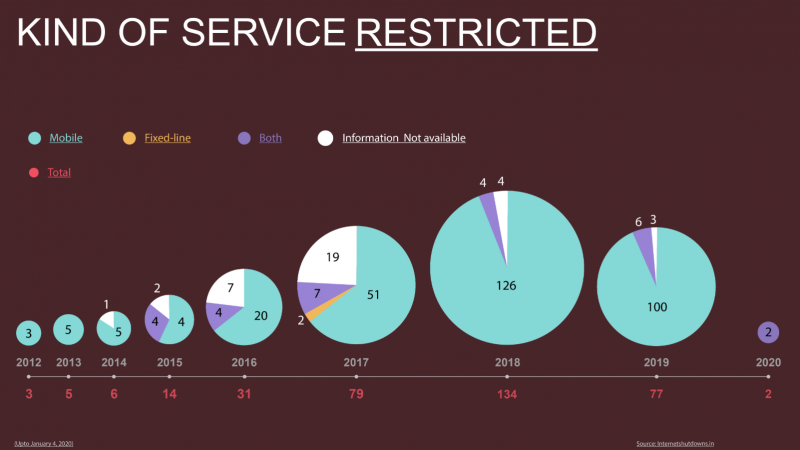 The nature of Internet shutdown in India over the past 8 years. Chart via Internetshutdowns.in CC BY-NC-SA 4.0

On 10th of January, 2019, the Supreme Court of India, requested the Indian central government to review the suspension of internet services in Jammu and Kashmir. The ruling stated that the five-month long communication blockade imposed on the region by the Indian government is unlawful, and it gave the administration seven days to justify its continued use.

Since August 5 2019, after the abrogation of Article 370 of the Indian constitution that provided special autonomy status to Jammu and Kashmir, access to mobile, landline and internet networks have been suspended. The government cited protection of national security as a reason for the restrictions. In October 2019, certain services were partially restored, however, most of Kashmir has remained disconnected from the internet making it the longest network restriction in a country that likes to describe itself at the ‘world's largest democracy’.

Today marks 5 months of internet blockade in Kashmir – perhaps the longest in the world.

We know about curfews, detentions etc – but is that all?

Here's a short thread about the lesser-known things that have happened in Kashmir over the last 5 months.

In November 2019, the Jammu and Kashmir High Court disposed of a petition seeking restoration of prepaid mobile phone connectivity and internet services in Kashmir on the ground that similar petitions were pending before the Supreme Court.

The Supreme Court of India, responding to the petition by Ms Anuradha Bhasin, the Executive Editor of Kashmir Times, gave the petitioners and the people of Jammu and Kashmir a glimmer of hope with this verdict. Ms Bhasin, in her argument, challenged that such blanket restrictions violate the fundamental right to freedom of expression, and that there is no proved connection between the availability of the internet and the rise of terrorism.

The ruling by the Apex Court is being seen as a welcome move, even though restrictions on fundamental rights in Jammu and Kashmir continues.

It Was The Spring of Hope, It Was the Winter of Despair’ : SC Rules on Kashmi #Kashmir #KashmirLockdown #SupremeCourt Verdict explained https://t.co/I9A6e59Tv8

The blockout has affected the lives of millions of people in Jammu and Kashmir, depriving them of the basic right to access the internet, which many take for granted in today's digital age. This situation is also taking a huge toll on the economy.

No internet in the valley, Volunteers of @JKSTUDENTSASSO across the country step in to check board exam results online for Kashmiri students. That’s where we stand today. #KashmirLockdown pic.twitter.com/Ud9y4zEjVI

The Apex Court of India has given the government a week’s time to review the internet ban. It also noted the imposition of Section 144 (unlawful assembly) of the Criminal Procedure Code which prevents movement in the Kashmir valley, and said the law can't be used over and over again for a long time and needs to be justified. The Court based its decision in the Indian Constitution, which grants citizens the right of freedom of speech and expression.

We declare that the freedom of speech and expression and the freedom to practice any profession or carry on any trade, business or occupation over the medium of internet enjoys constitutional protection under Article 19(1)(a) and Article 19(1)(g).

SC [Supreme Court] linking internet to Article 19 (1) (g) of Constitution is crucial. It gives right to carry on any occupation, trade or business. This is critical for Kashmir because many businesses using internet , especially tourism, health, finance & other services have suffered big time.

Although the choice is seemingly challenging, we need to clear ourselves from the platitude of rhetoric and provide a meaningful answer so that every citizen has adequate security and sufficient liberty.

What the ruling entails?

The ruling clearly states that the right to freedom of speech and expression cannot be taken away without specifying reasons and duration for restrictions on this fundamental right.

So far, the restrictions have also included a ban on the internet in educational institutions and hospitals. Some hotels, businesses and government offices have had their internet restored since October 2019 under certain conditions. The January 10 ruling has given instructions to restore internet connections for all the essential services.

The government has been citing security concerns and a fear of loss of lives as the reason behind the continued ban on internet access. However, with the Supreme Court's new ruling making it mandatory for the government to publish orders that have been passed, newer petitions challenging the lock-down of Jammu and Kashmir will emerge.

The Internet Freedom Foundation (India) has said in a an statement on the verdict:

The judgement in Anuradha Bhasin v. Union of India provides a sound legal basis to challenge future communication shutdowns but it does little to address the harm already caused to Kashmiris in the last 158 days. The Court has rejected several extreme arguments made by the government regarding secrecy of orders and national security, and the principles and safeguards laid down, in this case, are the first steps in reforming the telecom suspension process in India. This judgement is a call to action in a lot of ways and it marks the beginning of a long uphill campaign. There needs to be disciplined and strategic follow up action to ensure it is implemented by the government in its true spirit in Kashmir and other states.