What do we know about the ‘Great Firewall of India’?

Broadband services will be restored after creation of social-media firewall 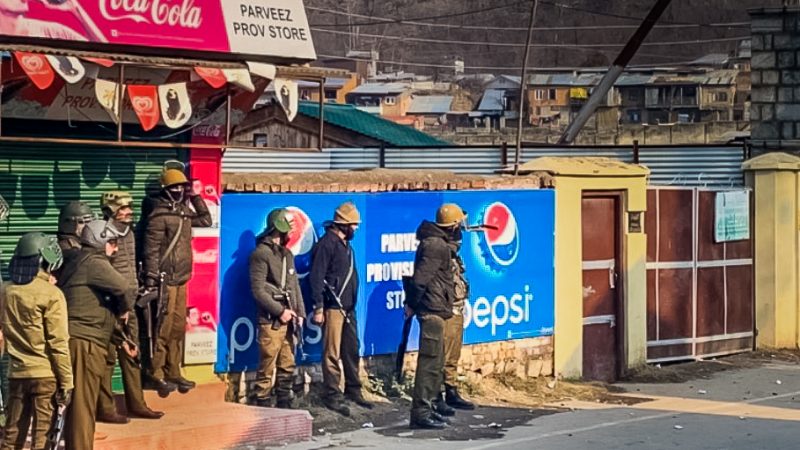 Scene during clashes between security forces and students at Islamia college of science and commerce in Srinagar. Image by Ieshan Wani. Used with permission.

After five months of complete internet shutdown in the federally-administered Indian union territory of Jammu and Kashmir, only partial internet access has been restored after the interference of the Indian Supreme Court on January 10, which called the shutdown ‘‘unconstitutional’’.“Freedom of internet access is a fundamental right”, said Justice N. V. Ramana who was a part of the bench that gave this verdict.

This shutdown marks one of the longest ever internet shutdowns in any democracy around the world, and is viewed by experts as a potential signal of the rise of the ‘‘Great Firewall of India’’. The term “great firewall’’ is used to refer to the set of legislative and technical tools deployed by the Chinese government  to control information online, including by blocking access to foreign services and preventing politically sensitive content from entering the domestic network.

While the Chinese firewall has evolved as a very sophisticated internet censorship infrastructure, the Indian one is yet to get organized into a large-scale and complex structure. India's tactics to control information online include banning entire websites and services, shutting down networks and pressuring social media content to remove content on vague grounds.

According to internetshutdowns.in, a project that is tracking internet shutdowns in India and created by legal nonprofit Software Freedom Law Centre, the shutdown that was imposed on August 4, 2019, has been the longest in the country and was only partially lifted in Kargil on December 27, 2019, while the rest of the state was still under the shutdown.

Landlines and mobile communications services were also blocked in addition to regular internet services. Although the “verified users” of the Kashmir valley saw 2G services working on January 25, 2020 with access to only 301  white-listed websites (153 initially which was later expanded to 301), social media, Virtual Private Networks (VPNs) and many other sites remain banned.

The administration of J&K passed an order on 25th January ordering for the restoration of 2G internet for around 300 whitelisted websites. We spoke to @iamtanzeelkhan about this and this is what he has to say about the current situation of Internet in #Kashmir #LetTheNetWork pic.twitter.com/L9zSjVfvWL

Internetshutdowns.in also tweeted on February 4, 2020 that some of the whitelisted 301 sites were still inaccessible:

An order was released on 25th January 2020 by the administration of J&K allowing internet access on 2G for 301 whitelisted websites. We asked a user to access some whitelisted websites on 2G.
This is what was found. #LetTheNetWork #KeepItOn #JammuAndKashmir pic.twitter.com/s7V2NqaHBd

Independent research indicates many facets of the white-listing such as violation of India's net-neutrality rules, political nepotism and potential surveillance by favoring unencrypted JioChat — an app by Indian conglomerate Reliance allegedly favored by the Modi-led government according to media reports— while banning end-to-end encryption-based chat services like WhatsApp.

The Logical Indian reported on January 30, 2020, that broadband services in Kashmir will be be restored only after the creation of an alleged social media firewall. It is currently unclear whether these restrictions will only be imposed in Kashmir or in other areas of India as well.

Nazir Ahmad Joo, General Manager of Bharat Sanchar Nigam Limited (BSNL), a public mobile and broadband carrier, told the digital news platform that his company is working on a developing “a firewall’’:

We have called a team of technical experts from Noida and Banglore who are working over creating a firewall to thwart any attempt by the consumers to reach to the social media applications[..]

Internet Service Providers like mobile internet carriers were asked by the government  to install “necessary firewalls” while “white-listing” the list of allowed websites in an order dated January 13, 2020.

Just wrote this: The beginnings of the great firewall of India?https://t.co/bSs0L4L4xw

Indian Supreme Court: Access to the internet is part of free speech

After reviewing multiple petitions on the internet shutdown, the Indian Supreme Court, on January 10, noted that the imposed shutdown is not just a violation of India's Telecom Rules, but is also against the “fundamental right to freedom of speech and expression and the right to carry on trade or business using the Internet’’ that are constitutionally protected by the Article 19 of the Constitution.

In the meantime, the partial shutdown continues in Kashmir despite the Supreme Court's verdict of January 10. Ironically, the order from the Jammu and Kashmir home department mentioned above was imposed a day after the Court ruling.

The shutdown started right after Bharatiya Janata Party (BJP), the right-wing political party that has a majority in the federally-ruling National Democratic Alliance, pushed for the abrogation of the Article 370 of the Indian constitution. The Article provided the formerly state of Jammu and Kashmir (J & K) a special status and significant autonomy as compared to the other citizens from the rest of the country. Of many other restrictions, non-Jammu and Kashmir citizens were barred from purchasing properties in the state. With the abrogation, the former state was split into two union territories (federally-controlled administrative regions) — Jammu and Kashmir and Ladakh.

Nikhil Pahwa, editor of digital and telecom media house Medianama, highlights that this action of partial shutdown sets the stage for legitimizing blocking infrastructure, unaccountable and secret blocking of the internet, blurring the line of internet shutdown by allowing some sites, allowing government officers to monitor user activity and violation of neutrality and other digital and human rights.

To tighten its control, the Indian government is also considering the adoption of a law that would force social media companies to censor content it deems illegal.

The yet-to-be finalized Information Technology Intermediaries Guidelines (Amendment) Rules of 2018 detail how Indian government officials can request social media and companies including Google, Facebook, Twitter and TikTok to take down content it deems unlawful, including on vague and broad grounds such as defamation, obscenity, invasion of another's privacy and hate.

There are many examples of how the current regime has been manipulating vague laws and imposing sanctions to silence criticism of the government. Two recent examples include the arrest of the mother and the school teacher an 11-year old child over the latter's participation in a play criticizing the new amendment to the citizenship law, and an Indian police officer possibly demanding Twitter to remove content by a user exposing the former's for allegedly viewing pornography online.

India is sinking: 11-year-old student's mother, Nazbunnisa & School head-teacher, Fareeda Begum, have been arrested by police on January 30 on charges of sedition for staging a play which voiced dissent towards Modi & his discriminatory citizenship law. https://t.co/z3CpdIcAEj

Check out Global Voices’ special coverage of the situation in Kashmir.