In Bangladesh, 'Smart Cards' have become essential for refugees' survival. 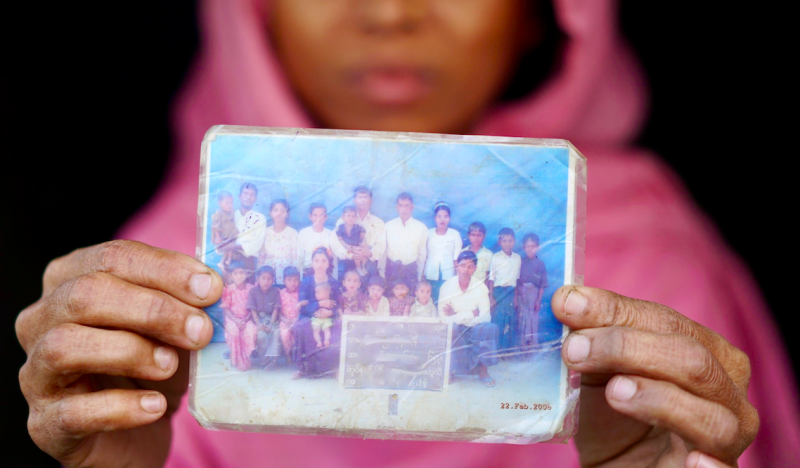 A Rohingya woman from Myanmar holds a SweTinSit photo. Seven of the people pictured were killed in military “clearance operations’’ in northern Rakhine state in August 2017. Photo courtesy of Shafiur Rahman.

Taslima was dreading the day. It was SweTinSit, an annual population census conducted by Myanmar government officials in northern Rakhine state. Military, police and customs officials would be sweeping through, collecting data on Rohingya families – monitoring the birth of children, photographing family members and listing their names. This was in 2016, when tensions in Rakhine were escalating.

For many Rohingya people, like Taslima and others in her village of Tula Toli, the SweTinSit (or “Map Record Check,” in Burmese) was a mandatory and intense audit, and always unpredictable. If one is absent during a SweTinSit, their relatives can be subject to extortion, imprisonment, arbitrary taxation, or worse. The year before, a relative of Taslima's was raped by a military officer.

In the SweTinSit of 2016, Taslima's brother-in-law had gone to work outside the village, to repay a debt. Fearing that he would be arrested for his brother's absence, Taslima's husband disappeared for the three days it took for the census to be completed in Tula Toli. Taslima paid a fine of 300,000 kyats (US $208) for her brother-in-law and a further fine of 200,000 kyats (US $138) for her husband.

Officers warned her that if her husband did not return while the census was still underway, there would be further consequences. In the early hours of the very next day, Taslima says that four men, including the village chairman Aung Ko Sein, entered her hut and raped her in front of her two young children.

From SweTinSit in Myanmar to ‘Smart Cards’ in Bangladesh

I met and interviewed Taslima in 2018, after she, along with hundreds of thousands of Rohingya Muslims like herself, had fled from Rakhine state to Bangladesh.

At this time, the lists and the photographs produced during SweTinSit amounted to the only forms of official Myanmar government documentation that many of them had. Authorities do not grant citizenship to Rohingya people born in Myanmar territory. In government documentation systems and rhetoric, Rohingya are referred to as “Bengalis,” erroneously suggesting that they are migrants from Bangladesh.

In Bangladesh, photos and lists from SweTinSit have become portable memories of loved ones, thousands of whom perished in the so-called “Clearance operations.” These documents also are potentially the most compelling claim to citizenship that Rohingya refugees possess, given that many of these records stretch back decades.

Once they had arrived in Bangladesh, at the Balukhali camp, Taslima learned that her household family members would need to register with camp authorities in order to receive food tokens. To register, Taslima and her family members were told to submit their information, fingerprints, and an iris scan, all of which would be collected and logged in biometric “Smart Cards.”

Speaking with others in the camp, Taslima and her husband heard different views on the Smart Cards. But concerns grew stronger, and the opposition to Smart Cards germinated and spread. Many refugees refused to believe that the card was just a practical necessity for aid management and delivery, that it had no social or political meaning.

On Twitter, the head of the United Nations High Commissioner for Refugees (UNHCR) Filippo Grandi called the Smart Card a “personal document which is also a tangible sign of dignity and hope.” But many Rohingya disagreed. At the heart of their suspicion lay the fact that the cards did not include the word “Rohingya,” although the database for the Smart Cards does include this information. The card itself describes Rohingya cardholders as “Forcibly Displaced Myanmar Nationals.”

What's in a name?

One might imagine that to be called a “Myanmar National” would be favourable for many Rohingya, who for decades have struggled against the Myanmar government’s refusal to grant them citizenship.

It is not standard practice [to include one's ethnicity on an ID card]. But the people in the camps felt very strongly about their ethnic name given their experience of being labelled “Bengali” in Myanmar. They wanted to secure their Rohingya identity on a card finally. They thought it would amount to some international recognition of Rohingya ethnic identity.

And for many, the decision not to include the term “Rohingya” indicated deeper collaboration between the Bangladeshi and Myanmar governments.

For many, an even more worrisome aspect of the process was that the database registration form included the option to share one’s information with Myanmar authorities. This suggested that Smart Card biometric information would be shared with Myanmar for repatriation, an abiding goal of the Bangladesh government for over four decades.

Many feared that data from the Smart Cards would be integrated into the Myanmar government's National Verification Card system, a failed attempt (separate from the SweTinSit process) to register Rohingyas as illegal immigrants from Bangladesh formally. The registration form included a question, “when did you arrive in Myanmar and by which route,” with the answer often pre-filled. For Rohingya people, NVC cards marked them as foreigners and deprived them of their rightful status as citizens of Myanmar. They even termed it the “genocide card.” Except for those who were coerced to do so, Rohingya people refused to register for the card.

Within six months of the August 2017 influx of over 700,000 Rohingya people into Bangladesh, Myanmar dispatched its Social Welfare Minister, Dr. Win Myat Aye, to the camps of Bangladesh, to “convince” the refugees to return. His delegation argued NVC cards would help verify the identity of refugees returning to Myanmar. He pledged that cardholders would be granted freedom of movement, access to healthcare and education, and permission to cross the border.

With the introduction of the Smart Cards, activists feared the shared data of their Smart Cards would again allow Myanmar to propose the much-hated NVC card to them, only this time with UN entities conferring legitimacy upon it.

One group within the camp, called the Arakan Rohingya Society for Peace and Human Rights, vocally opposed the Smart Card, and organized some mobilisation against it. The organisation came under pressure from the authorities, thus the protests were not that widespread, and were later called off in December of 2018. The group leader, Mohibullah, saved face by claiming that the name Rohingya will be included in the process, but this was not an actual win for the protesters — the name had been in the database field since 2017, when the cards were first introduced. To date, the name Rohingya still does not appear on the actual Smart Card.

The Smart Card registration process has also been harrowing for many refugees. In 2018, I began hearing reports of various types of “irregularities,” coercion and beatings. In interviews I conducted, witnesses reported incidents at the point of information collection, and beatings meted out by officials.

On 10 October 2018, several women in Musini camp recorded video interviews in a distressed state describing their rough treatment, including beatings, by the camp authorities the day earlier. Nay San Lwin, of the Free Rohingya Coalition, decided to take the videos and show them personally to the then Bangladesh Foreign Secretary, Shahidul Haque. He complained that refugees were being beaten for refusing the Smart Card.

Soon thereafter, Nay San Lwin was barred from the camps, and Bangladesh intelligence agencies began to monitor his movements. The head of the country's office of the Refugee Relief and Repatriation Commissioner, Abul Kalam, issued a swift denial of the violence.

Taslima's family received their Smart Cards in July of 2019, long after the agitation against the cards had ceased. Taslima says she still felt some trepidation when they had their biometric data collected.

“I had to stand in line the whole day,” she said. “They told us they would withhold rations and that we couldn't stay in the camps. So we had no choice.”

When I told that her Smart Card will hold information about her for years, maybe decades, Taslima looked puzzled.

“They are going to know everything about us,” she said. “But they never told us anything. They also took our photographs – just like in Burma.”